Are the etymology and status of hosed known, and if so, what are they? For this question, "hosed" is used as at onlineslangdictionary or at urbandictionary. (That is, with meaning broken, messed up, worn out, rather than its probably-older "put hose on" or "attached hose" past-participle meanings.)

My question about the status of the word is whether it indubitably is slang, vs. being a "proper dictionary word". I've always supposed it should be the latter, and imagined that dictionary compilers have left it out by mistake.

Note 1: as a plus, the onlineslangdictionary site tabulates votes on frequency of use and sense of vulgarity of words, and tabulates hundreds of recent tweets containing 'hosed'; perhaps as a minus, it gives a needlessly wordy definition: "utterly and undoubtedly affixiated in a troublesome situation".

Note 2: ngrams.googlelabs.com shows frequency of use of 'hosed' tripling between 1930 and 1940.

Update 1: Among answers given so far, the "police brutality [by] use of water via fire hoses" and/or "being beaten with a rubber hose" explanations seem less compelling than (i) the explanation stemming from hose as "transparent metaphor for the penis" (supported by specialised slang dictionary references) or (ii) the explanation based on SCTV / Mackenzie Brothers / Great White North reference and Wikipedia hoser entry. If it becomes more clear in a few days I'll checkmark an answer. - jiw

Early on that word of course was used to talk about the action of cleaning something off with a garden hose, but that is not the meaning you are asking about. I do not recall ever hearing that term used with that meaning before the 80's. What happened in the 80's?

Well, SCTV had a very funny (to us USAsians) skit with a couple of stereotypical Canadians called the McKenzie Brothers. They were constantly calling each other "hosers", and talking about how they had "hosed" each other. The skit went the 80's equivalent of viral, with an album (with a couple of singles that got good airplay) and a movie spun off it. The effect was that we (in the USA) got "hoser" added to the language as sort of a good-natured insult, or a way to make fun of Canadian speech. 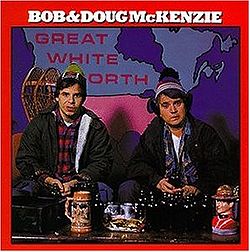 Along with it, we borrowed the verb and adverb forms of "hosed" from the same source. Its a much more useful word, so it kinda lost its association with Canadians, and got fully adopted into the USA lexicon.

So where did Canadians come up with these words? That's where personal experience fails me, so I have to rely on online sources:

Like the very similar term hosehead, the term may have referred to farmers of the Canadian prairies, who would siphon gas from farming vehicles with a hose during the Great Depression of the 1930s.[citation needed] The expression has since been converted to the verb 'to hose' as in to trick, deceive, or steal - for example: "That card-shark sure hosed me." Hosed has an additional meaning of becoming drunk - for example: "Let's go out and get hosed." Another possible origin is derived from hockey slang. Before ice resurfacers, the losing team in a hockey game would have to hose down the rink after a game. Thus the term "hoser" being synonymous with "loser".

Personally I prefer the hockey explanation, but that doesn't make it right.

Currently the OED says there is no clear evidence of the term being used prior to its use by Rick Moranis and Dave Thomas, which to my mind leaves a strong possibility that they may have invented the slang themselves (although they are both Canadian, so they could well just be the first to record an existing slang).

The etymology of hosed as broken is very similar to that of screwed or fucked.

In short, the metaphor is, unsurprisingly, that of a sexual act. The hose is a transparent metaphor for the penis.

So that in the case of hosed as in that of screwed the semantic path is that of:

1. About the penis usage

hoser
1. n. a good guy or buddy.
Old Fred is a good hoser. He’ll help.
2. n. a cheater or deceiver.
You dirty lying hoser!
3. n. a moron; a stupid acting person. (Rude and derogatory.)
Come here, you hoser. I’ll show you how to do it.
Bob is such a hoser! He never gets anything right.

hose someone down tv. to kill someone. (Underworld. From the image of spraying someone with bullets.)
Mr. Big told Bruno to hose Max down.
The thugs tried to hose down the witness.

And the Oxford Dictionary of Contemporary Slang has complementary albeit similar entries:

hose vb American to have sex with. A mainly male vulgarism.
There must be someone here that I could hose...Better get some more sherry to smooth out my brain.
(S. Clay Wilson cartoon, Head Comix, 1968)
hose monster n American an extremely promiscuous and/or sexually active person. The term, which may be used pejoratively or appreciatively, is particularly applied to heterosexual females. Compare shag-monster
hoser n American
1. a fraud, deceitful person, cheat
2. a promiscuous person, usually female Both senses of the term are found in the vocabulary of high-school and college students. The etymology of the word is not certain, but probably derives from hose as a noun meaning penis and a verb meaning to copulate or screw in the figurative sense of defraud.

There was a recurring Saturday Night Live sketch in the late 70s with Dan Aykroyd and Steve Martin as the "Wild and Crazy" Czechoslovakian brothers. In one of those sketches, Garrett Morris told them "You've been hosed." To which Martin replies "Hosed? Count me in!" a reference to the sexual meaning. But Morris explained "No, hosed! tricked! I mean they stood you up, man!" I think this slightly predated the "Great White North" routine.

In the 1950s, American Fighter pilots used the term to mean shooting at. As in, "Hose him!" See Boyd: The Fighter Pilot Who Changed the Art of War. A fascinating book, by the way. In the 1960s he was promoted to the Pentagon, and was known for often using the term to mean to get the upper hand over a rival. Close to the modern meaning.

If your earliest memories of police brutality are the use of water via fire hoses on civil rights demonstrators, you would likely guess that as the origin.

But I'm guessing that being beaten with a rubber hose (supposedly to not leave bruises, like with a baton), again by police, is more likely the origin, and would explain the term predating the civil rights marches.

I think you might be ignoring the fact that the penis reference from the 20's, and the general referring to the penis as a hose led to it becoming a euphemism for "f**king". If you used that hose to have sex with it, then you would be hosing someone. Extend all the meanings of "f**king" "getting f**ked" "getting screwed" etc. and hosing, getting hosed, hoser and so on. Tie all of the references together and there you go, eh?

In my shop the system was first "hosed" and then some bright guy made the "host operating system error detected" comment. Hosed was in use around Chicago about/prior(?) to the SCTV skits in the mid-70s.

The 1924 Mack Sennett comedy "Lizzies of the Field" shows a sign in an auto garage offering steam cleaning, except "Fords are hosed" http://moviessilently.com/wp-content/uploads/2013/10/lizzies-of-the-field-1924-mack-sennett-billy-bevan-silent-movie-image-06.jpg

Incidentally Google ngrams has hosing rising in popularity with hosed in the 1940s.

Before Windows this was the same as the blue screen of death.

If your system was HOSED, it was halted with no recovery.