Are there any exceptions to the rule of adjective order?

What is the rule for adjective order? addresses the rule but does not state if there are any exceptions in common use.

http://theguardian.com/commentisfree/2016/sep/13/sentence-order-adjectives-rule-elements-of-eloquence-dictionary goes further and claims, "Unlike many laws of grammar or syntax, this one is virtually inviolable, even in informal speech."

Is it really inviolable?

Yes; in some cases, the "improper" ordering is more popular than the "proper" one. Occasionally, there's not even a preference for any order between two adjectives.

According to Forsyth, color comes after shape:

Quality > Size > Shape > Color > Provenance
The Elements of Eloquence: Secrets of the Perfect Turn of Phrase

Ngrams indicates it's been a battle:

(Is it really a law when it can change so often?)

In other cases, it's just anarchy: 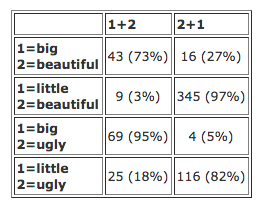 According to Forsyth (I think), those all should be opinion-size, i.e. 2+1 as in the second column — but all of them are mixed, and some go pretty strongly the other way.

Exceptions are certainly possible. The linked article even mentions one: "Big bad wolf."

Furthermore, it seems to me that adjective order has a lot more freedom if the adjectives are loosely linked with a comma in between them. The article claims no one would say "old silly fool", but I think it would be unremarkable for someone to say "old, silly fool."

The quoted sentence only seems to make sense to me if we conflate actual descriptive rules of grammar and syntax, as identified by linguists, and "zombie rules" that are prescribed, but that don't actually describe usage accurately, such as "don't end a sentence with a preposition" or "don't start a sentence with a coordinating conjunction." The latter are obviously highly "violable"—not only in informal speech, actually, but even in educated writing (but if you point this out to a prescriptivist, you'll often be told something like "great writers are allowed to break the rules").

But in general, linguists don't expect actual laws of syntax to be violable at all. For example, articles such as "the", "an" and "a" must come before the associated noun ("the child") rather than after ("child the"); this is not optional at all. Compared to an actual "law of syntax" like this, the adjective-order rule is actually pretty violable.

The adjective-order "law" also seems to be acquired by children much later than the law governing the word order of nouns and articles: there's an anecdote about J.R.R. Tolkien writing as a child of seven about "a green great dragon", and being corrected by his mother. Could you imagine a child of this age writing about e.g. "great green dragon a" or "great dragon green a"?

A side point: in my experience, the generally known rules for adjective order in languages like French, Italian or Spanish are also over-simplications. In fact, I'm not aware of any language that has completely, rigidly unviolable rules for ordering adjectives that belong to the same general syntactic category, but you may be able to find an example if you read the literature (I haven't, but the linked Language Log post points to The Cross-Linguistic Distribution of Adjective Ordering Restrictions by Richard Sproat and Chilin Shih).

Learners of English are told that adjectives go before the noun, but there are exceptions to this rule. [...] But there are also certain adjectives that sit very happily after the noun eg there are no rooms available

In regards to an orang silver knife, I could in a strange sense see it as a knife of any material that is orange in color and is designed to shave a bar of silver. Lol

In regards to 'there are no rooms available' not answering the question, I believe it does. Take this situation for example; what if I call a hotel and ask for a specific type of room, say a non-smoking room... the attendant may feel compelled to answer in kind, and thus may reply with a list of adjectives in the order of adjective noun adjective such as; 'we apologize, however there are no non-smoking rooms available. And in a more strange example I could ask for a small purple room, in kind, one might reply; there are no small purple rooms available... this I feel would be an acceptable exception to the rule. Although it might be more appropriate to say there are no small purple available rooms, I think it would sound odd to an American ear. Perhaps 'there are no available rooms that are small and purple', could work, but again this sound a bit awkward to me. My point is it is an answer if you begin to add more adjectives. 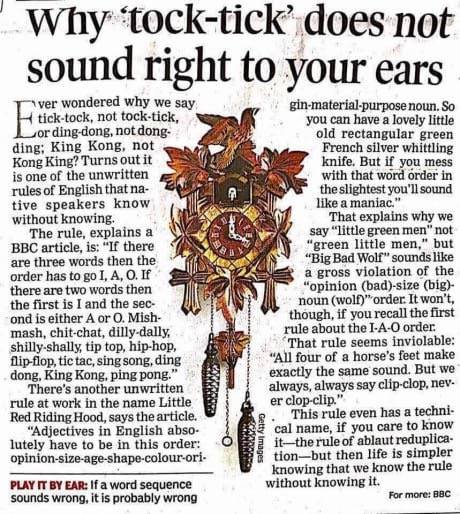 Not the answer you're looking for? Browse other questions tagged adjectives word-order or ask your own question.

295
What is the rule for adjective order?