I think I've looked everywhere I could, but I couldn't find any dictionary where the difference between "to target at/on/for/towards" would be explained. Can you please fill me in as to how they are used? I need to explain it to a student and say more than just... "you'll know what to use" :)

Perhaps I am missing the point, but 'Target' as a verb is usually used without a preposition following it. As in:

The passive voice uses prepositions after Target, as witnessed by the following extractions from Cambridge and Oxford online dictionaries, in that order 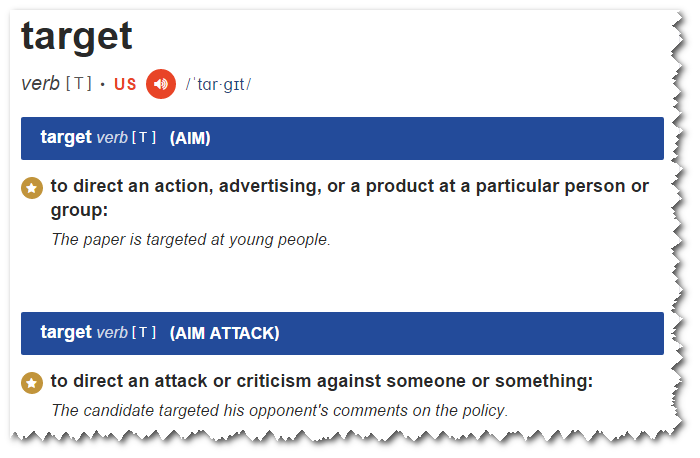 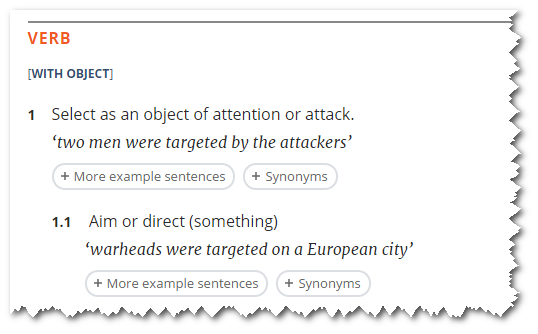 The use of 'Aim' would include a preposition, as in:

As far as use is concerned (which wasn't the question, but I think it's relevant), 'Target' is less used as a verb than 'Aim', but it's not unknown. Ngram gives the following result for the search 'let's target, let's aim'. I considered searching for 'to target, to aim', but I think the results were skewed by such phrases as 'missile time to target'.

Not the answer you're looking for? Browse other questions tagged meaning word-usage phrasal-verbs or ask your own question.

11
what is the difference between everywhere and anywhere
3
Multifarious usage of 'yet'
0
Health food and healthy food
2
What does “Wireless-men” mean?
1
What is the meaning of "power dynamics"?
0
Meaning of "It was a shortcut for her. She entered at ease within its complexity, at home in song and in feeling."