Why is “call out” en vogue?

When did "call out" become so widely used as in:

To combat authoritarianism, to call out lies, to struggle honorably and fiercely in the name of American ideals

(from the New Yorker)

Although 'to call out' in the sense of 'to challenge, confront' has been in use since at least the late 1600s, early uses are limited to uses with the added sense of 'to challenge to a fight', and especially to a duel. Thus, early uses refer in the main to physical combat, rather than verbal. I will assume for purposes of restricting the scope of the answer that the question is about the later and contemporary uses with this more restricted sense:

to call out
....
4. trans.
....
b. orig. and chiefly U.S. To expose or identify (a person) as acting in a dishonest or otherwise unacceptable manner; to challenge or confront. ....

Note that the OED muddies the otherwise limpid lexical waters by tacking a cross-reference onto definition 4b (of 'to call out'): "Cf. to call on —— 5 at Phrasal verbs 2."

to call on ——
....
5. trans. orig. and chiefly N. Amer. To challenge or confront (a person) over his or her dishonesty or unacceptable behaviour. ....

Furthering my goal of limiting complexity in the answer, which could easily become unwieldy, I will ignore the interconnections of these senses of 'to call out' and 'to call on' and focus only on documented recent upticks in the use of 'to call out' sense 4b.

The question asks "when" 'to call out', in the sense exampled, became "so widely used", thus assuming that it has become more widely used.

Evidence in the NOW Corpus (News on the Web) from 2010 to 2016 for the phrase "call * out" suggests the assumption in the question is correct, although the increased frequency is not overwhelming, and the evidence is not as clearcut as could be hoped.

When 'to call out' became more widely used might, on the basis of the raw NOW Corpus data as presented and analyzed so far, be said to have been the last half of 2015. It remains to be seen, however, what percentage of the uses charted are uses in sense 4b.

First, note the pattern of uses for various replacements of the "*", as charted above. I've checked the phrases I consider likely to often although not invariably be uses in sense 4b: 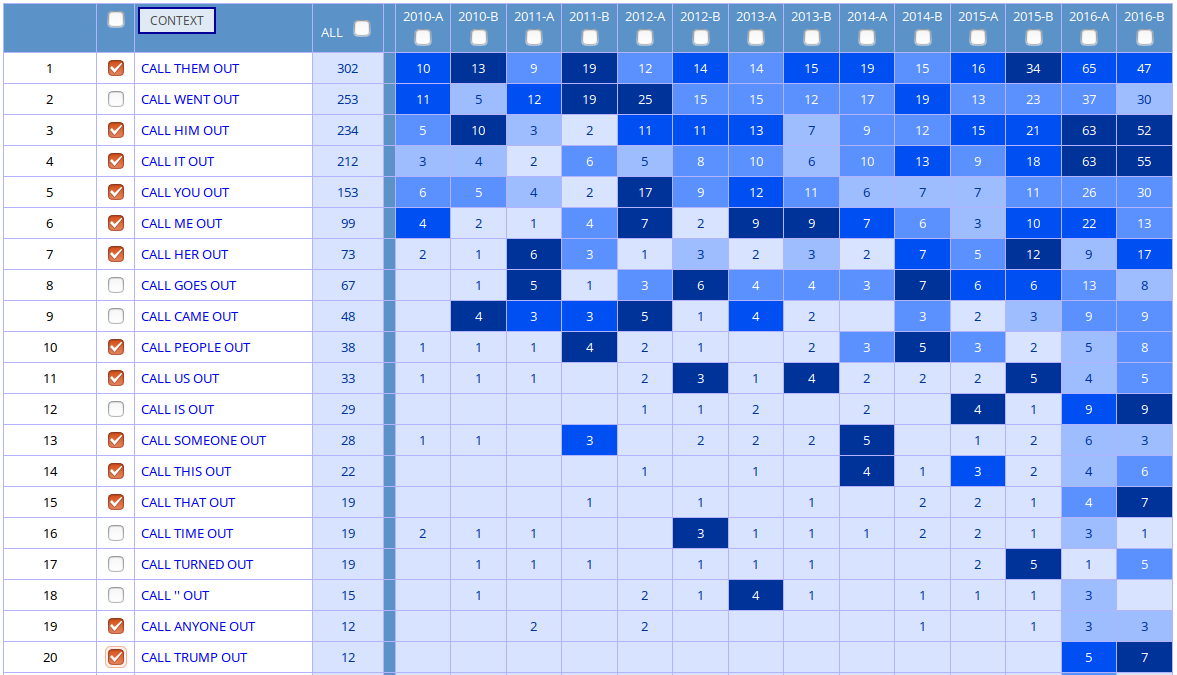 Without belaboring the point, a rapid scan of the context of the checked phrases in 2016 establishes that the predominant usage is in sense 4b. Here are the most recent 25 uses in the corpus: 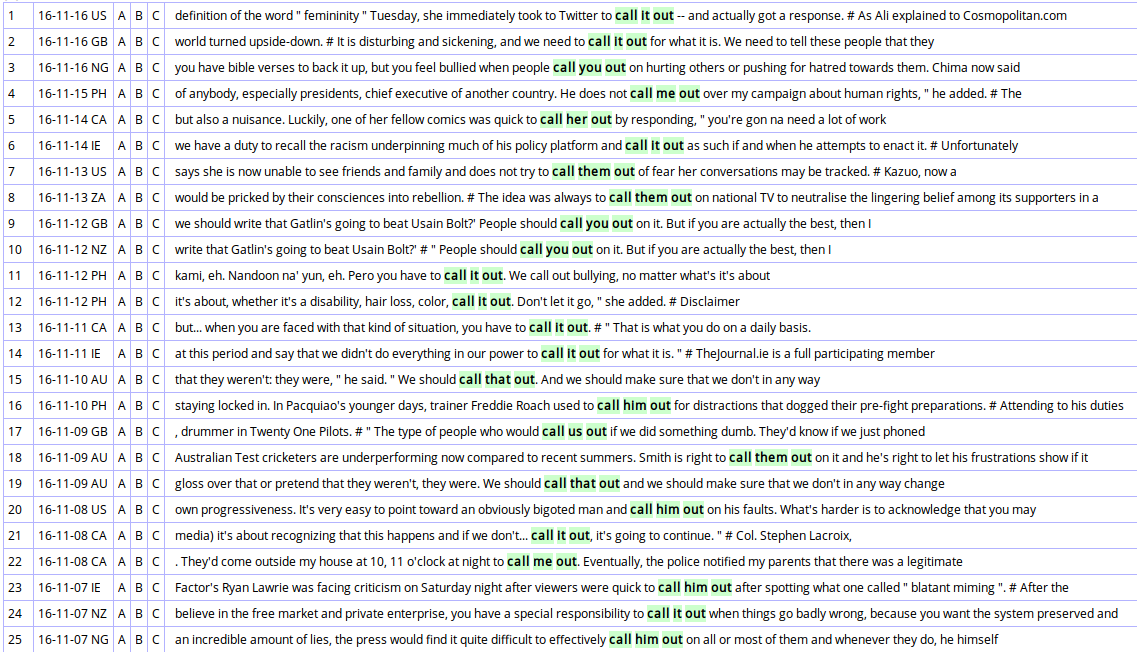 As a check for bias, varying the parameters of the corpus search produces similar, if not more striking results. For example, a search for "call out" (without an inserted replacement term), returns this chart:

The context of uses for 'to call out' without a replacement token, however, shows the simple phrase "call out" is not predominantly used in sense 4b. Only five of the most recent twenty-five instances were clearly uses with the 'to challenge or confront' sense.

18
When and why did the N-word and “negro” go apart?
4
Origin of “nose out of joint”
9
Source of the phrase “call [somebody] out of name”
7
Why “out” in “eat your heart out”?
8
Orange “is the new” black!
2
When/why was “so” dropped in “whomsoever”?
0
Why does forbearance mean tolerance?
2
Origin of the usage of “late” to mean deceased
6
Why do Australians and NZers call snacks/lunch *crib*?