Mimsy were the Borogoves - why is "mimsy" an adjective?

Twas bryllyg, and the slythy toves
Did gyre and gymble in the wabe:
All mimsy were the borogoves;
And the mome raths outgrabe.

I've read some articles about that poem. All of them (for instance, this one) say that mimsy is an adjective, but they don't say why. I can't make head nor tail of the syntax of this sentence.

All gray were the wolves

All the gray ones were the wolves

So, is the form of using an adjective in the example above really correct? And why it can't be a noun (i.e. like in all wolves were the animals)? I really can't understand it.

At the suggestion of the kind commenter, let me discuss the syntax of

All mimsy were the borogoves

There are two possibilities. The first is that mimsy is a noun, in which case we have the structure

This pattern would obtain for recognizable nouns thusly:

All priests were the granters of indulgences.

The borogoves were all mimsy

but it's possible to invert the order and put the adjectival complement all mimsy first, i.e., to have the order

All rosy were the cheeks of the children.

This is a recognizably poetic style. Consider the lines from Walt Whitman's Leaves of Grass:

Brave, brave were the soldiers (high named to-day) who lived through the fight;
But the bravest press'd to the front and fell, unnamed, unknown.

In ordinary prose, we'd say "the soldiers were brave".

At the prompt of a second kind commenter, let me note that the modifier all doesn't help us figure out whether to choose noun or adjective for mimsy. (Perhaps this part of the sly whimsy of the Deacon Dodgson.) If we're thinking noun, then all is an acceptable as a universal determinative, as in

All soldiers are brave.

If we lean toward adjective, then all is acceptable as an adverbial modifier, as in

We are all excited.

To decide, consider the following common* English adjectives, most‡ of which are formed by adding the suffix -y to the related noun ending in s/se to get an adjectival form: ease->easy, nose->nosy, etc.

Now compare this to a list of common** English nouns ending in -sy:

The countable nouns require a plural form to go with the determinative all and the plural verb were:

All autopsies were performed by the coroner.
All fantasies were repressed by the patients.

and so on. The noncountable nouns in the singular can take the preceding all, but they require a singular verb:

All fantasy is meaningless.
All courtesy is hypocritical.

Given the distribution favoring adjectives of words ending in -sy, the lexical likelihood of finding a related noun, the syntactic constraints on number, and the fact that this is a poem, where the subject/adjectival-complement order may be inverted, a fluent English speaker will consider that mimsy is an adjective meaning having the qualities of a mim, some noun unknown.

*I obtained my list here. Since I edited the results, and I'm going to argue by weight of vocabulary, I need to reveal my method. I avoided double counting by excluding some words formed by prefixing (e.g., aacatalepsy, discourtesy, nondrowsy, overbusy, rebiopsy, ultraglossy, uneasy).

‡ Those not related to common nouns are noted in the numbered notes, the content of which is from the OED. Those which have no known candidates for related nouns are in bold italic.

Later in the book, Humpty Dumpty gives Alice an explanation of the odd words in the poem and he defines 'mimsy' as 'miserable and flimsy'. In other words, we know it is an adjective because Lewis Carroll intended it to be one.

Fortunately, Carroll's own definition assigns the part of speech to 'mimsy'. Otherwise, the word might now be taken as an early and unprecedented appearance of the British regional 'mimsy', also an adjective, but with a somewhat different meaning, although latterly sometimes influenced by Carroll's coinage:

This 'mimsy' is attested first in 1880; the etymology is given:

The first part of the compound, 'mim', has a much earlier provenance, first appearing around 1586, and attested through 1991. It is also an adjective (and adverb), used regionally in Scottish and British English:

Reserved or restrained in manner or behaviour, esp. in a contrived or priggish way; affectedly modest, demure; primly silent, quiet; affectedly moderate or abstemious in diet (rare). Also (occas.) of a person's appearance.

However, Carroll himself was kind enough to differentiate between his 'mimsy' and the British regional 'mimsy'. As Humpty Dumpty explained to Alice, 'mimsy' is a portmanteau of 'flimsy' and 'miserable' (Through the Looking Glass, 1871):

Exactly so. Well, then, "mimsy" is "flimsy and miserable" (there's another portmanteau for you).

The portmanteau clearly amounts to something akin to 'unhappy', but if there was any doubt, that meaning is made explicit in Carroll's gloss of the first verse of "Jabberwocky", first published in Carroll's own literary magazine, Mischmasch, in 1855.

As mentioned by Carroll's nephew, Stuart Collingwood, who provides a facsimile of part of the gloss in an article in The Strand Magazine ("Before 'Alice' — The Boyhood of Lewis Carroll", 1899, p. 616), Carroll himself defined the eleven words in the verse that were not "pure, honest English": 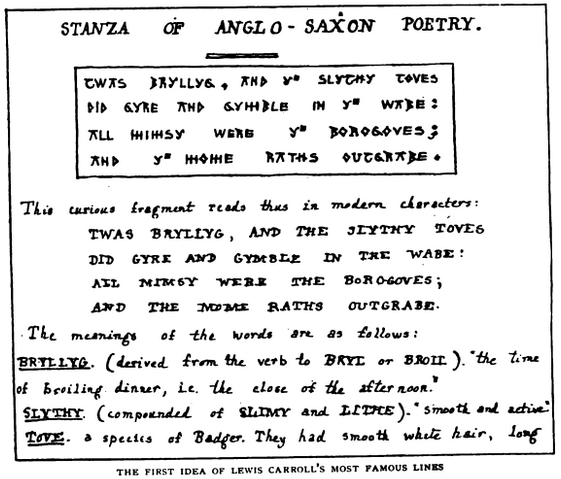 Collingwood's account gives the rest of Carroll's gloss, and also supplies a complete 'translation' of the first sentence (continuing from the facsimile): 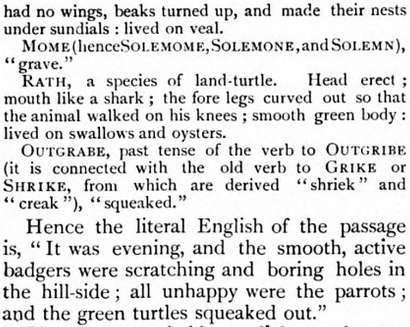 The evidence from the 1855 Mischmasch, along with the evidence given by Humpty Dumpty in the 1871 Through the Looking Glass, leaves no doubt that 'mimsy' is an adjective. Without that evidence, 'mimsy' could well be a noun, verb or even a subdued interjection in poetic use.

Something that hasn't been mentioned yet: "all" here is being used as an adverb. Some examples of common English phrases using this construction:

To add to the other answers...

The poem is a pastiche of heroic poetry such as Beowulf. This inversion is generally seen by native English speakers as old-fashioned/archaic. There are many other archaic constructions in the poem too - just in that first verse, "twas midnight" and "the slithy toves did gyre" are forms which were no longer in use in spoken English at the time Carroll wrote it.

Whilst this is amusing in its own right, it's also a dig at the Victorian poets who were (in all seriousness) writing heroic poetry and using these archaic constructions to try to add gravitas to their writing. Edward Lear did the same with some of his nonsense rhymes - The Cummerbund is a prime example, although Lear took it a step further by using genuine words. (Look up the actual meanings for the Indian words referenced!)

If you embed the sentence as a complement, you have to change the word order:

This tells us that the original example has had its subject inverted, because subject-verb inversion applies only in root (unembedded) clauses. So we know that "the borogoves" is subject, and "were" agrees in number with that subject:

If "mimsy" were a predicate noun, it would have to agree in number with the subject "the borogoves". Compare with a familiar noun:

But adjectives in English do not have a distinct plural form,

So if mimsy were a noun, the original example would have had to be

"Mimsy" must be an adjective, since it doesn't agree in number with the subject.

It's an example of poetic inversion. "The borogroves were all mimsy" wouldn't trouble you. Mimsy is an attribute of the borogroves. Writing it backwards makes no difference.

Poets (and Yoda) like doing that sort of thing.

Not the answer you're looking for? Browse other questions tagged adjectives syntactic-analysis parts-of-speech or ask your own question.

2
The Guardian: "It does indeed [...] misleading them [...]"
8
"Love me tender": adverb or adjective?
19
Why "No smoking" works but "Yes smoking" doesn't?
17
What does "small small" mean in Indian English?
3
Why do grammars claim that adjective+adjective is always a morphological compound and never a syntactic construction?
0
Is there a name for phrases like "faint of heart" or "fleet of foot"?
1
What are the comparative/superlative forms of the adjective "well," meaning "in good health"?