Australian hypocorism and the origin of "selfie"

According to the "blog.oxforddictionaries.com" the word of the year 2013 was selfie. It took more than a decade to this neologism to enter the Oxford Dictionary. Its origin in fact dates back at least to 2002:,

Its origin appears to be closely connected to the Australian tendency to use the suffix -ie as explained in the following piece:

The suffix -ie a variant of -y is defined as:

Is hypocorism, among English dialects, mainly an Australian usage?

The -ie hypocorism is certainly used in other dialects, but it's definitely popular amongst Aussies.

Here's an interesting and relevant podcast about a study on hypocoristics (or clippies) by researchers in Melbs and Tassie.

Is there any evidence that selfie may have a different regional origin?

It's quite possible selfie was independently coined by different people in different regions at different times.

The 2002 "selfie" was posted by Australian to a forum on ABC [Australian Broadcasting Corporation] Online. That's the earliest one we know about. The poster and photographer, Nathan Hope, posted under the hypocoristic nickname Hopey: 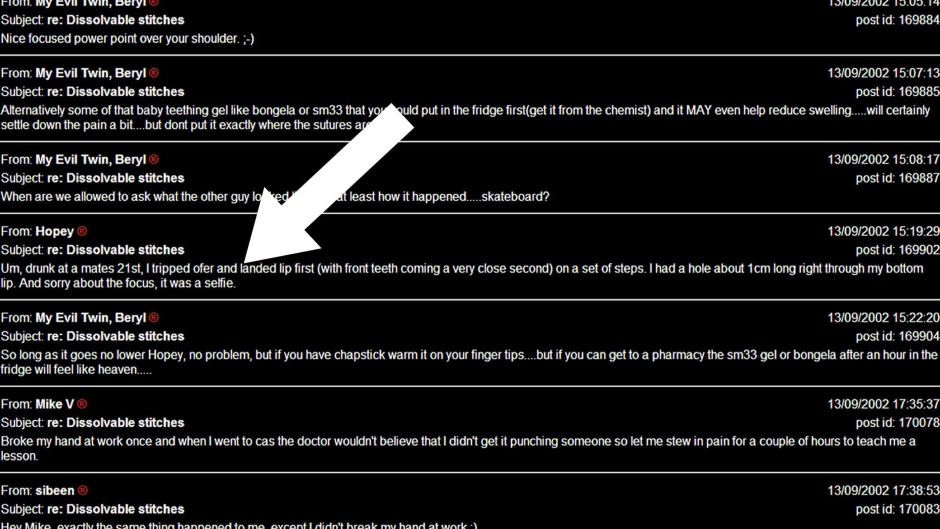 That's the earliest one we have written evidence for. However, when Hope was interviewed by ABC shortly after it became Oxford Dictionaries' word of the year he said he didn't come up with it. According to lexicographer Ben Zimmer:

Hope expressed genuine puzzlement that his long-forgotten forum post, complete with misspellings, had become international news, along with the photo of his busted-up lip. And he dispelled the idea that he was somehow responsible for the word. "It was not a word I coined. It's something that was just common slang at the time, used to describe a picture of yourself. Fairly simple."

So Hopey didn't coin selfie, but why would everyone think that he did? There is a common assumption that a word can be traced back to a sole identifiable inventor who forged it in a burst of creativity. While this is sometimes the case (think of Lewis Carroll's chortle, or J.R.R. Tolkien's hobbit), historical lexicographers know that far more often, the best we can do is follow the trail of evidence as far back as it takes us without uncovering an originator.

Furthermore, in this case, it's very likely that there was no single moment when the word was created, no Ur-selfie. Instead, as cellphone photography became commonplace more than a decade ago, numerous Australians probably thought to apply the hypocoristic –ie to make selfie. And it is also a good bet that, as is often the case with slang, the word traveled orally before anyone like Hopey thought to type it out in a forum that could be retrieved online by future word-hunters.

According to the Guardian:

The next recorded usage is also from Australia with the term appearing on a personal blog in 2003.

"It seems likely that it may have originated in the Australian context," [Oxford] dictionary editor Katherine Martin said.

"The earliest evidence that we know of at the moment is Australian and it fits in with a tendency in Australian English to make cute, slangy words with that 'ie' ending."

There's barbie for barbecue, firie (or firey) for firefighter and tinnie for a can of beer.

So it's quite likely that selfie was independently coined naturally by other people in Australia. And there's evidence of selfie being used in 2004 on Flickr by someone from Rhode Island, USA. There's no apparent link between Australia and this use, came into use at Flickr. Photographer Jim Krause also used the term in 2005.

All these uses were still some time before there was a cameraphone in every pocket, and the technology to upload them wasn't quite ready for the mainstream.

It's hard to say from where today's use sprang, although according to ABC:

The man credited with posting the world's first 'selfie' while asking for advice on his injured lip, Nathan Hope, says the modern solo selfie is not in the spirit of the traditional picture with a friend.

As it happens, I was the person to discover that first-known use of selfie by Nathan Hope from 2002. I also managed to dig up the actual photo too, see it here or here.