As someone who isn’t a native speaker of English, I’m often fascinated by how those who are seem to change the pronunciation of words originally from French, Italian, Spanish, and so on in a seemingly uniform manner.

But what unofficial rules govern this?

For instance, I recently looked in my fridge and saw a bottle of Tabasco chipotle hot sauce. The label said pronounced chee-POHT-lay and obviously, that's nowhere near how a Spanish speaking person would say it. 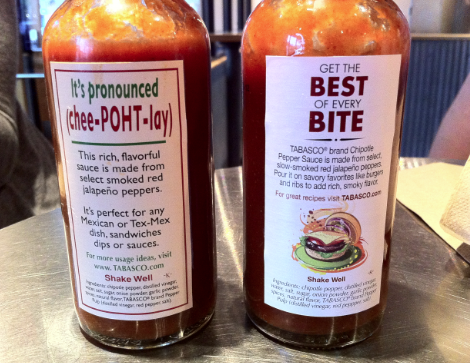 But what is it that makes Englishmen and Americans alike mispronounce — or perhaps I should say alter the pronunciation — in the same way?

This answer can't be as complete as I'd like it to be, because the "why" part of your question is fairly difficult and I don't know the answer. But here's some relevant information.

Peculiarities of the English sound system

One of the most salient and unusual features of the English sound inventory is the large number of diphthongal vowels: vowels that start in one place and glide to another place. Both the "oh" sound of "goat" (US /oʊ/, UK /əʊ/) and the "ay" sound of "face" (/eɪ/) are typically diphthongal.

An oddity of the English vowel system is that certain vowels generally can't occur at the end of a syllable. These are called "lax" or "checked" or "short" vowels. Many of the monophthongs that English does have fall into this category; for example, the vowels of "dress" (/ɛ/) and "lot" (US /ɑ/, UK /ɒ/).

Due to both of these factors, English speakers generally can't pronounce words exactly as they are in foreign languages without violating the pronunciation rules of their own language. It's physically possible to do that, but generally speakers don't, for various psychological and social reasons.

Why it can be difficult to pronounce words with foreign sounds

Psychologically, as I said earlier, our native language conditions both how we perceive sounds and our natural way of pronouncing sounds. Some English speakers certainly would be able to "pull a proper 'amigo' off", but others wouldn't. I'm a bit surprised that as a non-native speaker of English, you aren't already familiar with the difficulties that many people experience when they try to acquire a foreign accent.

Socially, using markedly non-English sounds while speaking English can often trigger a negative reaction from listeners: people think it sounds affected (and when it's native English speakers doing it, it very well might be: as I said in the previous paragraph, for most native English speakers, it takes more conscious effort to pronounce a word with foreign sounds than it does to pronounce a word with native English sounds). You can see an example of this attitude in the following SNL skit: Antonio Mendoza

The next part is the part I can't explain very well: English speakers generally find word-final /e/, /ɛ/ or /e̞/ in foreign words to be best approximated in English by the diphthongal "face" vowel /eɪ/. (As I'm a native English speaker, the phonetic similarity of these sounds just seems obvious to me. But people do know how to analyze this kind of thing more scientifically; you can study the sound system of the language, what distinctions it makes, and what phonetic variation exists and use this information to try to explain why native speakers adapt foreign sounds in certain ways.) To some degree, this is also conventional: people are familiar with using "face" /eɪ/ for foreign e-sounds, so they might apply this knowledge to pronounce a foreign word they've seen in written form even if they haven't heard the word in question.

Some differences between English and British nativization of foreign sounds

By the way, it's not true that English and American speakers always adapt foreign words the same way. These varieties of English do have different sound systems and this affects how they nativize the pronunciation of foreign words. One notable point of possible divergence is the adaptation of foreign /a/ sounds: UK speakers are generally more likely to use the /æ/ vowel of "trap", while American English speakers are generally more likely to use the /ɑː/ vowel of "spa". Another possible point of divergence is in fact /o/ or /o̞/: I have the impression that UK speakers are more likely than US speakers to use the "lot" vowel /ɒ/ to approximate this vowel sound when it comes before a consonant. The Oxford English Dictionary lists /tʃᵻˈpɒtleɪ/ as a British alternate pronunciation of "chipotle." For this specific case, the "lot" vowel is actually used by some Americans as well, but I think I've seen other examples that demonstrate this tendency.

Armed with a couple of weeks of French language instruction under my belt, I ventured forth from my provincial university in the north of France and set about booking my railway ticket to Paris for le weekend. But first I had to locate the railway station which meant verbally accosting the doughty locals on the street and asking, in my best intoned French translation of the English, "Where is the railway station, please". I was met with stony silence, Gallic shrugs of the shoulder and finally a denizen who replied with a certain frisson of barely concealed disdain, C'est fini, monsieur! The penny eventually dropped. I had transposed the French pronunciation of the words for railway station and war! Easily done in the carefree days of 1976.

Not the answer you're looking for? Browse other questions tagged pronunciation loanwords french spanish italian or ask your own question.

4
Pronouncing Dictionary.com's W.O.D “vade mecum” in English
3
Why is /e/ generally transcribed as 'ay'?
1
Why is the pronunciation of French loanwords with the ending é botched?

9
Do the Eskimo/Inuit languages really have more words for snow than English
3
What is the word of Spanish or Portuguese origin starting with “a” and meaning enthusiast?
10
What is the English pronunciation of “nougat”?
1
Which syllable is stressed in the English word 'romance'?
7
What lies behind the etymology of the word dandelion?