There is an episode in Woody Allen's movie Take the Money and Run. A lady is being interviewed about Virgil, the main character in the movie. And she goes:

Just to think that that idiot was a criminal, I just can't believe it. There was a mind working in there that could rob banks. It's phenomenal. Once I said to him, "what do you do?", and he said, "I rob banks". Go no, right!

I hope you get the mood of this passage. So, what does this "go no" phrase mean here?

The transcription of the character should be Go know, right?

The subtitles (in Spanish) are ¿Puede creerlo? "Can you believe it?" 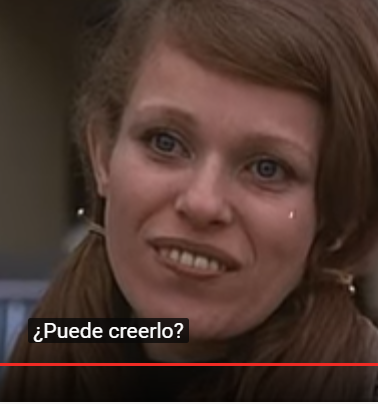 Screencap of YouTube subtitles from Take the Money and Run

The similarity with Go figure is useful: that means "Can you work it out?" or "Who would ever have worked that out?" or something similar. In the film, know is substituted for figure, with a similar construction intended.

Wikipedia mentions go know in its page of Yiddish expressions:

geh vays: literally "go know", as in "go figure". ("Last week she said she hated his guts and now she's engaged to him. Geh vays.")

Woody Allen's Jewish heritage is well-known, and apparently* he spoke German at home in his early years. This expression may have rubbed off on him then and appeared in English in later works.

Not the answer you're looking for? Browse other questions tagged phrases expressions or ask your own question.