Etymology and Pronunciation of “Ouija”

Wikipedia offers two etymologies, and life experience has given me two pronunciations (wee-JA and WEE-jee).

Pronunciation:
Online sources confirm the wee-JA pronunciation, but the movies produced by Hasbro (the makers of the game) use the WEE-jee pronunciation.

Do either of the etymologies factor into the two pronunciations?

Concerning the origin of the 'ouija', the name given to what is or was also called, variously, the 'planchette' (a forerunner device), the 'talking board' (a forerunner name), and the 'Egyptian Luck Board' (a contemporaneous alternative name), the most credible account is that the name was supplied by Helen Peters, the sister-in-law of the patent applicant, Elijah Bond. Peters, according to the history put together by Ouija historian Robert Murch, spelled out a word engraved on a locket she wore during a session with a talking board.

[Peters received] the O-U-I-J-A name from the board itself, which told her the strange word meant “good luck.”

(In truth, the name “Ouija” was written on the necklace locket that Peters was wearing at the time.)

Murch's conclusions, based on more than twenty years of research, are also cited more comprehensively in an article titled "The Strange and Mysterious History of the Ouija Board" (Smithsonian.com, 27 Oct 2013, by Linda Rodriguez McRobbie):

Contrary to popular belief, “Ouija” is not a combination of the French for “yes,” oui, and the German ja. Murch says, based on his research, it was Bond’s sister-in-law, Helen Peters (who was, Bond said, a “strong medium”), who supplied the now instantly recognizable handle. Sitting around the table, they asked the board what they should call it; the name “Ouija” came through and, when they asked what that meant, the board replied, “Good luck.” Eerie and cryptic—but for the fact that Peters acknowledged that she was wearing a locket bearing the picture of a woman, the name “Ouija” above her head. That’s the story that emerged from the Ouija founders’ letters; it’s very possible that the woman in the locket was famous author and popular women’s rights activist Ouida, whom Peters admired, and that “Ouija” was just a misreading of that.

My own ad hoc research into the origin of the name, carried out over the course of many hours (well, less than two), also suggested that the novelist and feminist Ouida might have been the inspiration for the name. In addition, my research trivially discredited one claim in the Smithsonian.com article, namely that in "February, 1891, the first few advertisements started appearing in papers". Rather, those advertisments first appeared in October of 1890, and proliferated in December of 1890. The later ads stated that the claims about the board had been "tested, and...demonstrated" as required before the patent was granted: 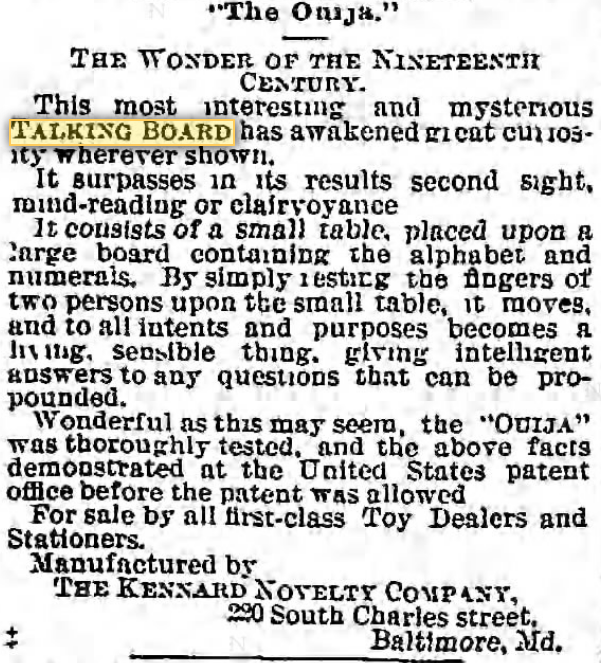 The earlier ad for ouija boards appears on p. 4 of the 24 Oct 1890 Evening Star (Washington, DC), and shows what must be regarded as the original pronunciation, we-ja: 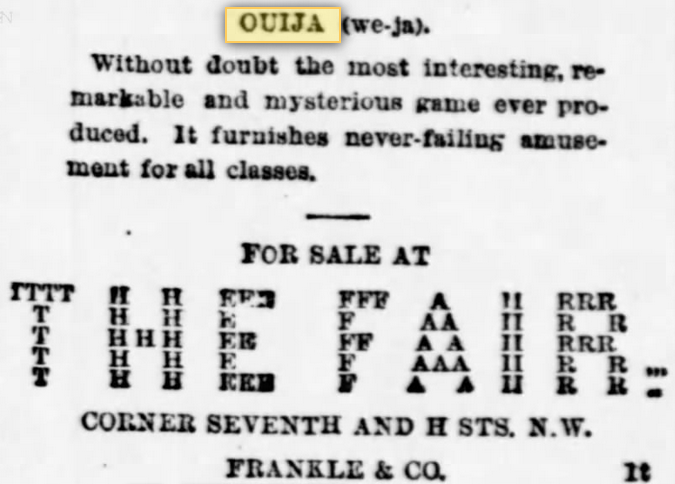 My...extensive...two-hours (or so) of research also suggested another possible source of the word on Peter's locket. In a story about a popular good luck talisman picked up from the American Register of Paris and reprinted on p. 6 of the 24 Nov 1885 issue of the St. Louis Post-Dispatch (St. Louis, MO), the word 'oudja' is reported to signify "luck and happiness". The story was widely reprinted in various forms through at least 1891. I show here a condensed version of the tale from The Times (Shreveport, Louisiana, 7 Oct 1891), reprinted from the Philadelphia Record: 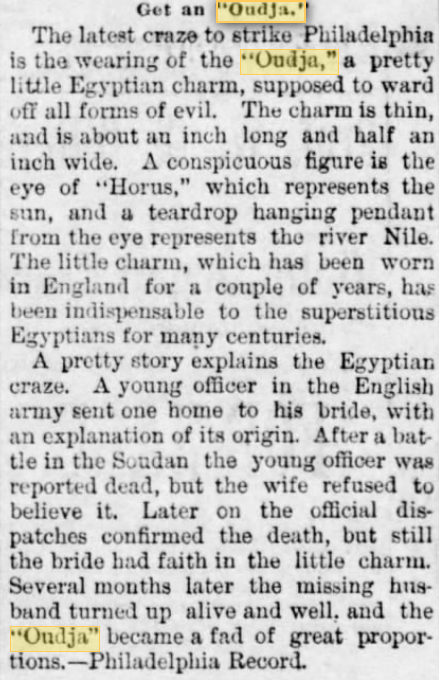 While the Oudja story plays into the alternative name of the ouija board, the 'Egyptian Luck Board', and is contemporaneous with the creation of the name 'Ouija' by Peters, the emblem described is not "the picture of a woman" said to be born by the locket Peters wore.

Origin uncertain. The word has been variously explained as (a) < French oui oui adv. + German ja yes (see yea adv.), (b) < an ancient Egyptian word for ‘good luck’ (although apparently no such word exists), and (c) < the name of Oujda, the name of a city in Morocco.