If “thy” is an informal pronoun, then why does The Lord's Prayer use it to refer to God? [duplicate]

9 After this manner therefore pray ye: Our Father which art in heaven, Hallowed be thy name. 10 Thy kingdom come, Thy will be done in earth, as it is in heaven. 11 Give us this day our daily bread. 12 And forgive us our debts, as we forgive our debtors. 13 And lead us not into temptation, but deliver us from evil: For thine is the kingdom, and the power, and the glory, for ever. Amen.

This answer says that the second person informal is used when speaking to God, but does not give a reason as to why. To me it would make more sense to address the creator of the universe as formally as possible.

There is no indication in the text of any early English translations that the use of thou/thee/thy/thine signifies "informal you". That notion is a theological and interpretative one, and frankly better asked about elsewhere (SE: Christianity or SE: Biblical Hermeneutics).

For instance, Jesus addresses Satan with Thee: are we to take this to mean we (or even he) was using "informal you" rather then simple singular you to address Satan?

Thou/thee/thy/thine were used in these translations to preserve the distinction in number between you-singular and you-plural, which is also found in Latin and Greek (I am not sure about ancient Hebrew), the languages that these translations are based on. Wycliffe had only the Latin at his disposal; the Rheims (the official Roman Catholic translation) was also based on Latin; while others, including the KJV, were based both on the Greek and on earlier English versions (thus, the translators of the KJV consulted not only the Greek but the Rheims, etc).

This distinction in number can be seen in such passages as Luke 21:31-32. For example, the KJV has:

31 And the Lord said, Simon, Simon, beholde, Satan hath desired to haue you, that he may sift you as wheat:

32 But I haue prayed for thee, that thy faith faile not; and when thou art conuerted, strengthen thy brethren.

As another example, note that the use of singular-you is also used in the exchange between Jesus and the Devil in Matthew 4 (the three temptations). See for example Matthew 4:9-10:

9 And [the Deuill] saith vnto him, All these things will I giue thee, if thou wilt fall downe and worship me.

10 Then saith Iesus vnto him, Get thee hence, Satan: for it is written, Thou shalt worship the Lord thy God, and him onely shalt thou serue. 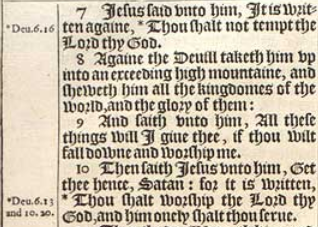 Here is a screen shot of the Our Father from the Douay-Rheims Bible of 1610, which includes the 1582 Rheims NT:

And a screen shot of the Our Father from the King James Version of 1611. 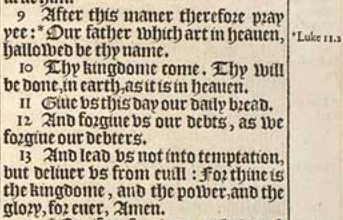 If you want a theologically-based answer (for instance: how should people "address the creator of the universe"?) from a Christian point of view, you should probably post this on SE: Christianity or SE: Biblical Hermeneutics.

Note: I favour the OP's title Why does the Our Father use “thy”? rather than the edited version If “thy” is an informal pronoun, then why does The Lord's Prayer use it to refer to God?

Also, my suggested edit to the OQ, adding the tag grammatical-number remains apropos and should not have been rejected.

As William Tyndale translated the Bible into English in the early 16th century, he preserved the singular and plural distinctions that he found in his Hebrew and Greek originals. He used thou for the singular and ye for the plural regardless of the relative status of the speaker and the addressee. Tyndale's usage was standard for the period and mirrored that found in the earlier Wycliffe's Bible and the later King James Bible. But as the use of thou in non-dialect English began to decline in the 18th century, its meaning nonetheless remained familiar from the widespread use of the latter translation.

The 1662 Book of Common Prayer, which is still the authorized form of worship in the Church of England, also uses the word thou to refer to the singular second person.

https://en.wikipedia.org/wiki/Thou#Religious_uses (emphasis added by me)

Early English translations such as the Wycliffe and the Old English, however, were themselves translations of the Latin Vulgate.

The Latin Vulgate text can be found here: https://en.wikipedia.org/wiki/Lord%27s_Prayer#Original_Greek_and_translated_Latin_versions

Not the answer you're looking for? Browse other questions tagged formality early-modern-english religion thou-thee-thy or ask your own question.

6
Does the phrase “who's in?” or “I'm in!” exist in (informal) English?
0
Informal use of the title 'sir'
5
Why did the KJV use “thou” toward God?
15
Shouldn’t “art” be “is” in “Our Father who art in heaven”?
1
Why did the personal pronoun “you” “survive” and not the others?
2
When writing an informal letter, is it advisable to use the em rule at all?
16
Does the word candidate have to refer to a person?