When and why we use double-genitive with respect to the word 'of'?

I wanted to know why and when to use double-genitive. So for example why can't we use 'I am a fan of YOU' instead of 'I am fan of YOURS'. This is so as using the word 'of' itself meant that the noun mentioned first (before 'of') already belongs to the second noun (after 'of'). For example, in 'I am a fan of YOU' , the word 'of', to me, already suggests that 'I am your fan' without using 'YOURS'. It is like if we use 'fan of YOURS', it meant like 'I am your fan that belongs to you'.

So why is it necessary to use the double-genitive here?

A similar question has been asked: Why use apostrophe-s to denote possession when using 'of'

But one of the answers said that it is optional to put apostrophe for the example given in the question except to clarify the meaning of the sentence. (This is a picture of Bill/Bill's) So, what are some examples that are compulsory to use the double-genitive?

For examples, is it:

There was one of your examples that made the difference clear to me (split by me to better facilitate my explanations below):

In the first case, ‘This is a picture of Bill’, using the single genitive, it is a genitive of quality, ɔ: that which describes what the picture is; in other words, it is a picture showing Bill. This becomes clear when replacing ‘Bill’ with some other noun, such as ‘[a] tree’, ‘[the] colour blue’:

1b. This is a picuture of [the] colour blue. ɔ: The picture is blue.

In the second case, ‘This is a picture of Bill’s’, the final genitive-’s indicates possession; in other words it is a genitive of belonging. That means the sentence says something about who has ownership of the noun. Using examples 1a and b above, this becomes clear by the absurdity of the new sentences:

Therefore, one can conclude that when using a double genitive, it indicates posession, genitivus subiectivus; and when using a single genitive (just ‘of’), it usually indicates

Regarding the 'double genitive', here is what the 'Practical English Usage' by Michael Swan says: 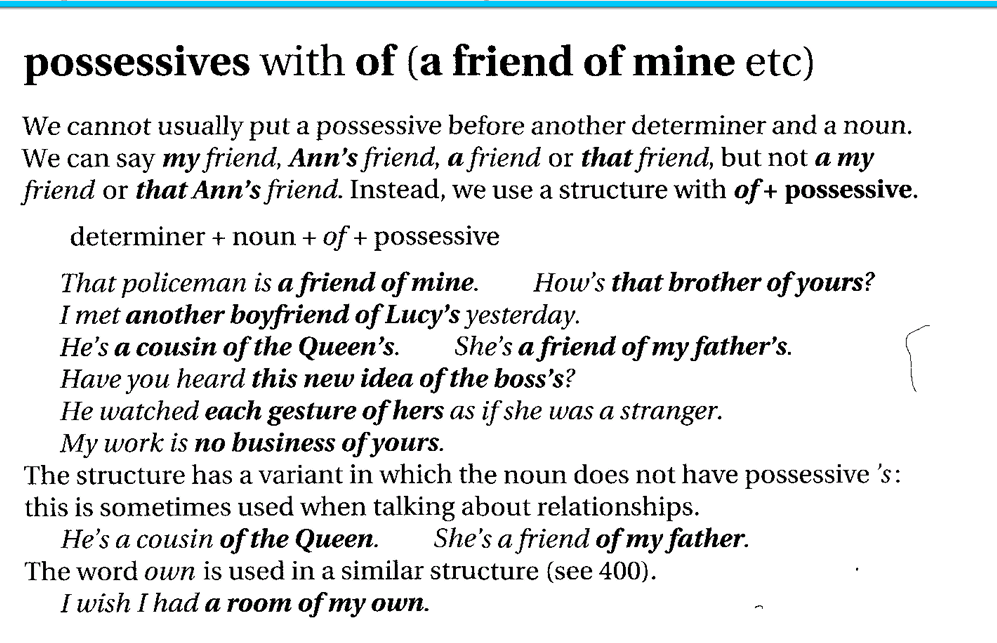 Not the answer you're looking for? Browse other questions tagged double-possessive or ask your own question.

28
Why do you say “friend of mine” instead of “friend of me”?
12
Why use apostrophe-s to denote possession when using 'of'

12
Why use apostrophe-s to denote possession when using 'of'
9
Why do we say “of mine/of his” instead of “of me/of him”?
34
Why is it usually “friend of his”, but no possessive apostrophe with “friend of Peter”?
17
Why 'a friend of mine' is not 'my friend's friend'?
4
Alternative for double genitive in “the author's master's thesis”
3
The use of “that of” and an apostrophe