Is there a word or phrase that is used to describe visual gags where, due the camera perspective, the audience immediately thinks one thing, but as soon as the camera/object/person moves, it reveals a new situation?

I personally think the term "visual gag" could be used to describe any type of visually humorous scene, so I'm looking for something more specific to describe the phenomenon of a temporary illusion that leads to a humorous reveal. Most of the time, the "reveal" requires something to move, but other times it simply requires closer inspection.

Or this image of a woman carrying a beige neck pillow.

Forced perspective is a technique which employs optical illusion to make an object appear farther away, closer, larger or smaller than it actually is. It manipulates human visual perception through the use of scaled objects and the correlation between them and the vantage point of the spectator or camera. It has applications in photography, filmmaking and architecture.

An example used for comic effect can be found in the slapstick comedy Top Secret! in a scene which appears to begin as a close-up of a ringing phone with the characters in the distance. However, when the character walks up to the phone (towards the camera) and picks it up, it becomes apparent that the phone is extremely oversized instead of being close to the camera. Another scene in the same movie begins with a close-up of a wristwatch. The next cut shows that the character actually has a gargantuan wristwatch.

Although forced perspective is often used with differences in scale, it refers to the situation where the viewing angle and viewing position are determined by the artist so that the audience is guided to a particular interpretation of the artwork.

Here is an example where 3D boxes and (2D) paintings (of boxes) are combined to trick the senses into thinking that some unrelated surfaces are part of the same box: 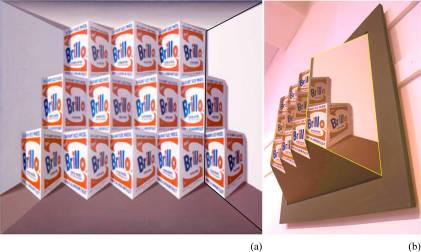 The videos you linked include a scene in which a train looks like it is about to demolish a house that is being transported, but in reality runs on a separate track that completely misses the house. That scene is an example of forced perspective as well.

Anamorphic illusions are another example of forced perspective. A distorted 2D painting (anamorphosis) is first created, based on a 3D scene. The anamorphosis looks distorted from almost all angles, but from one specific vantage point, it looks identical to the scene. If the viewer's perspective is forced to that vantage point, the viewer may be unable to tell the difference - especially if the view is captured and presented as a 2D photograph or video. See this page for an example. I can't embed video in my answer, but here is a picture from the same page: 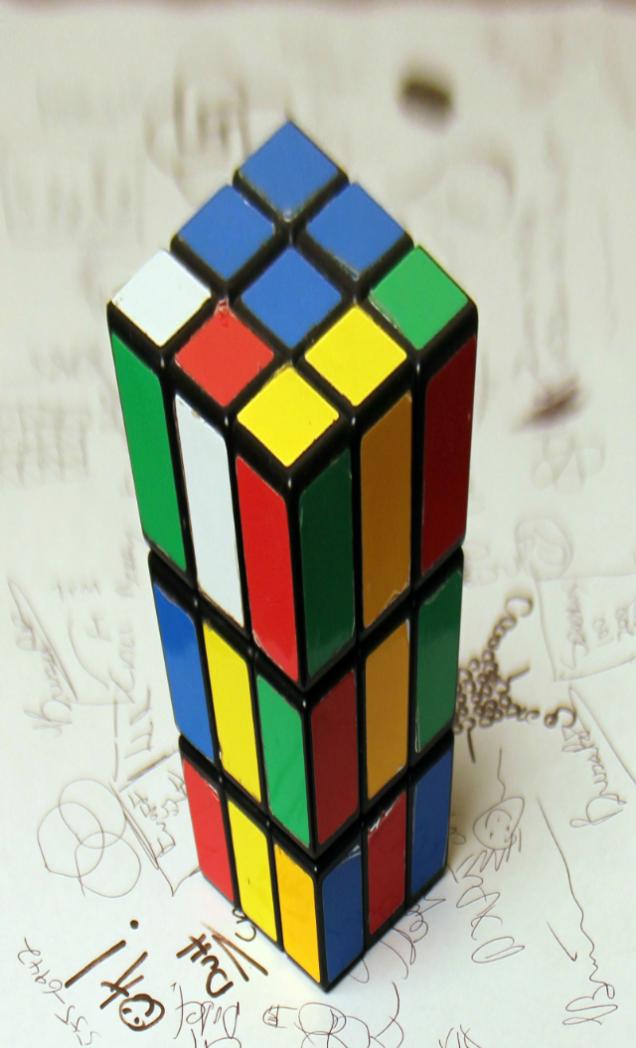 This technique is commonly referred to as pull back and reveal, as the second entry in this article demonstrates.

A term derived from the TV practice of panning out from a close-up to discover a humorous situation. Essentially you are holding back a piece of pertinent information until the end of the story.

May I propose slapstick comedy as one answer and physical comedy as another. They overlap.

Wikipedia informs us that:

Slapstick is a style of humor involving exaggerated physical activity which exceeds the boundaries of normal physical comedy.

Wikipedia further informs us that:

Physical comedy is a form of comedy focused on manipulation of the body for a humorous affect. It can include slapstick (my emphasis), clowning, mime, physical stunts, or making funny faces.

4
Is there a word or concise phrase for this type of question?
12
More concise word or phrase for "people who have been taken advantage of"
5
More concise word of phrase for "to turn into a process"
3
Word for temporary obsession
0
Is there a term that means temporary base camp?
0
One word or short phrase for ease of visual surveillance if required
1
Word for heat haze illusion
11
Word or phrase for a temporary solution that ends up becoming permanent
1
Word request for 'visual style guide' / 'visual nomenclature' / 'visual system'
0
Phrase for a useful or comforting illusion