Where does the term "word salad" originate?

Quite simply, where does the term "word salad" come from? I've found it a very frustrating thing to try to do web searches on, as it typically gets munged into searching about the "word 'salad'".

The oldest reference I've found is in a Google Books hit from 1954 in which they refer to it being a common term of doctors (in psychiatry). My assumption is that this is the origin, but I'd be interested if there are any solid cites that can be found earlier than this one.

The earliest attestation I can find ascribes the origin to Forel's wortsalat, as translated by Kraepelin to 'wordsalad'. This appears in The Medical Standard of 1895, recounting events from the May, 1894 meeting of the Association of German Alienists and Neurologists, where "Kraepelin of Heidelberg described a 'peculiar group of insane patients,' who, among 'other distressing symptoms,' exhibited as 'the most striking phenomenon' a tendency to the coinage of new words": 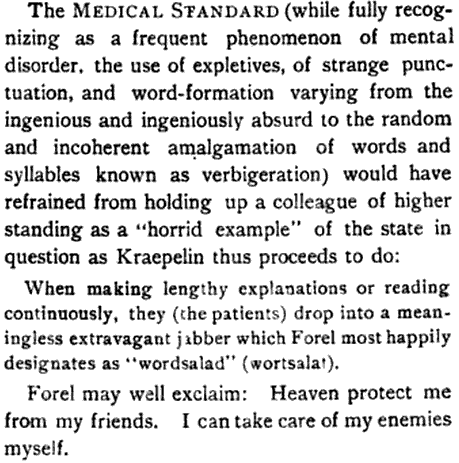 Although the earliest attestation in OED Online is from 1904, they give the origin as "after either German Wortsalat (1894 or earlier) or French salade de mots (1895 or earlier)", which jives with the date of the wortsalat attestation in The Medical Standard.

Not the answer you're looking for? Browse other questions tagged etymology psychology or ask your own question.