"Watch your six" meaning "beware what's behind your back."

and the title of the 1949 movie Twelve o'clock high clearly refer to the system of clock position.

It appears that this way of expressing directions comes from the military world (from the Navy or the Aviation) or from astronomy for instance, and that with time it has gradually entered common usage probably through movies like the one cited above. Or it might have a much older and different origin, after all pocket watches have been used for centuries.

Where and when was this way of expressing directions originally used?

Was it first an AmE or a BrE idiomatic expression or was it imported from a foreign languages.

I do not think that finding the earliest usage of “clock position” on the net will prove origin of the phrase. I have noticed that very often in history certain scientific ideas “spring up” spontaneously, almost simultaneously, in different geographical locations. This has become more common over time with the increase in availability of internationally published scientific works in related studies. However, tracing origins of ideas can also be difficult due to the habit that some scientists in the past had of jealously guarding their discoveries over years and even decades.

It can be inferred (but not documented by resources commonly available) that some early medieval astronomers, like many astronomers of today, relied on clock position to describe the arc of the moon through the night sky: the earliest astronomical clock faces were already in existence in the 14th century.

Chaucer´s Treatise on the Astrolabe (1326) is considered the “oldest work in English written upon an elaborate scientific instrument”, and comes very close, but not exactly to using clock positions. Although he generally used degrees of arc and Zodiac signs, he also mentioned a 24-hour system.

Much later, polymath Robert Hooke (b. 1635) was possibly one of the first to write about clock position using the 12 hour system in English. Hooke trained as a watchmaker, constructed microscopes and telescopes, observed tiny objects and the moon, and invented a semaphore system in 1691. It is entirely possible that he described features on the Moon using clock coordinates. This makes sense as the full moon never changes orientation, and is the same wherever viewed.

Due to his cantankerous temperament, Hooke was not well-liked by his contemporaries: some (such as Newton, with whom he entered into disagreement over gravity and inverse-square law) even went so far as to try and bury his existence after his death. Much of his work was published posthumously. It is speculated that some just disappeared.

All sundials going back to Mesopotamia relied on the Sun being at its highest point at the 6th hour of the the 12 hour day. Romans used a 12 variable-hour day, but marked noon as the VI hour on a sundial that resembled an inverted airport radar .

Notice that equatorial sundials, aligned in parallel with the equator, were the first to translate noon, or the 6th daylight hour, to a more horizontal position.

At some point in time, already familiar with the use of astrolabes and equatorial sundials, astronomers probably influenced clockmakers who started marking the day in 24 hour cycles, with the 12th hour being midday. When mechanical clocks came into existence in Northern Europe and England, this was reflected with the 12th (noon) hour being in the highest position and up on a vertical dial. With gradual acceptance of the 12 hour face (as opposed to the “double 12”) this became the model for most clocks, and 12 was always up, and 6 down.

The invention of the pocket watch led to the concept of clock position and direction relative to the observer. At some point in time some astronomer pointed out that the pocket watch could be used to orient an explorer by aiming the hour hand at the sun and picking South out as being the mid-position between that and the 12. This was a reverse usage to the original theory of the astronomical clock.

It has been commented that flag semaphoring has relied on the positions of the hands of the clock to describe how to form letters and numbers since the 19th century. Military Signal and Boy Scout “field instructions” on flag semaphore bear this out.

But here things remained for a period of time. Ships, and later airliners, navigated using sextant, and magnetic headings based on North and South, and depended on the precision clock for longitude. Map readers on land did pretty much the same.

So when did it become useful to use phrases like “on your six” or “enemy at 12 o clock high”?

Probably not until two things happened at roughly the same time--fast maneuverable war-planes, and the invention of air-to-air radio communications and intercoms. Although ground to air communications came into limited use during WWI, it was not until WWII that radioing between planes became necessary to identify friend from foe and to coordinate attacks between crewmembers over the intercom. The earliest use I could find was from 1943.

"...which was divided into quadrants each designated by an hour of the clock, whether above or below or level with an aircraft...as a quick and handy way of pinpointing an attacker."

1 As was pointed out in a previous post, clock positions can be given in modern Polish, but there is no tradition of this in German or Russian. As Hevelius in Gdansk was also observing the moon at roughly the same time as Hooke, as well as Copernicus, Kepler, this makes sense.

Direction associated with a clock face goes all the way back to Sun Dial time keeping, which for obvious reasons was all about direction. Furthermore, due to the fact that a circle has 360 degrees, you can indeed indicate any direction at all -- it just is not common to do so. Each minute, and each second, would be "pointing" to a specific direction.

When you look at a standard (analog) watch/clock you are looking at a more technically advanced sun dial that indeed indicates the position of the sun and it's location in the sky.

"Clock position", that is, this lexical sense of 'clock',

clock, n.
....
2. In extended use: used following a numeral to indicate direction, bearing, etc., in various contexts, with reference to the position of the numeral 12 on an imaginary clock-face, this being usually thought of as directly above or in front of the observer.

is first attested in OED Online from 1797:

1797 W. G. Maton Observ. Western Counties II. 129 The veins..run in a direction pretty nearly from south-east to north-west, or to use the terms of the miners themselves, lie at nine o'clock.

Observations relative chiefly to the natural history, picturesque scenery, and antiquities, of the western counties of England, made in the years 1794 and 1796. Illustrated by a mineralogical map, and sixteen views in aquatinta by Alken, vol. 2. Maton, William George, 1774-1835.

The same use is found in an earlier work, The Practical Navigator, and Seaman's New Daily Assistant (John Hamilton Moore, 1791) for use of 'clock position' in navigation:

While the use in navigation remains somewhat opaque to me, it is clearly a case of 'clock' used "following a numeral to indicate direction, bearing, etc., ....". Observe that, comparing the miners' use and the navigators',

...a direction pretty nearly from south-east to north-west...lie[s] at nine o'clock....

These uses by miners and navigators place one evidentiary origin of 'clock position' in 1791, and British English.

1888 Pall Mall Gaz. 9 July 8/2 A..stiff breeze..called ‘eleven o'clock wind’..that is to say, supposing the target to be marked like the dial of a clock, the wind would blow..in the direction of the figure 11.

While Pall Mall Gazette was a London publication, other and earlier evidence of 'clock position' use by rifle marksmen, such as the clippings from The Sun (New York, 1876) and the Chicago Daily Tribune (1875), suggests the use was of US origin. Some of that evidence makes explicit what at least one journalist considered the source of the terminology: 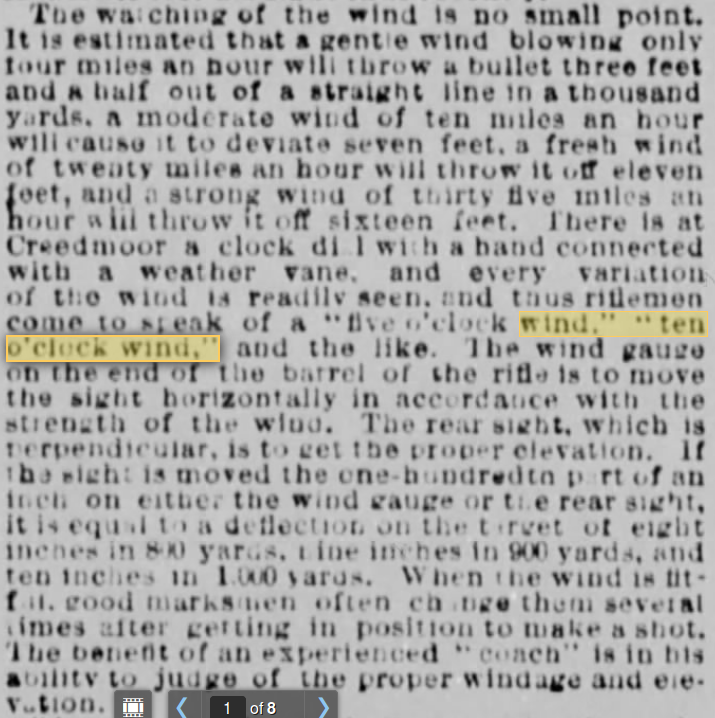 The quality of that clipping is poor, so I've transcribed one relevant portion of it:

There is at Creedmoor [a 19th century US marksmens' rifle range] a clock dial with a hand connected with a weather vane, and every variation of the wind is readily seen, and thus riflemen come to speak of a "five o'clock wind," "ten o'clock wind," and the like.

Another example, from the Chicago Daily Tribune (Chicago, Illinois), 14 Jul 1875:

Although this clipping came from a Chicago paper, the match reported was multinational, and held in Ireland.

The 'clock position' terminology used by rifle marksmen, which reportedly developed from the influence of the Creedmoor clock dial weathervane, is the likely progenitor of 'clock position' use in aviation and etc.

As others have pointed out, perhaps more ably than I shall, the connection between clock movement and relative direction is ancient in English. This is especially evident in, for example, English synonyms of 'clockwise'. One such synonym is

deasil | deiseal, adv. and n.
....
Righthandwise, towards the right; motion with continuous turning to the right, as in going round an object with the right hand towards it, or in the same direction as the hands of a clock, or the apparent course of the sun (a practice held auspicious by the Celts).

From Gaelic roots, 'deasil' (1771) baffled me until I considered that in the northern hemisphere, an observer of the sun's "apparent course" from sunrise to sunset faces south, and turns to the right. Thus 'clockwise' is to the right. On a horizontal plane, then, 3 o'clock is to the left of the meridian, 9 o'clock to the right, 12 o'clock straight ahead, and 6 o'clock behind. The same directions pertain on a vertical plane, with only the difference that 12 and 6 o'clock become up and down, respectively.

'Sungates' (1597), an earlier synonym of 'clockwise', is similarly defined: "In the direction of the apparent daily movement of the sun, that is (in the northern hemisphere), from left to right; ‘with the sun’" (op. cit.).

According to EtymOnline, it started in the late 18th century:

o'clock (adj.) c. 1720, abbreviation of of the clock (1640s), from Middle English of the clokke (late 14c.). Use of clock hand positions to describe vector directions or angles is from late 18c.

5
Reason for the strange meaning of “for any length of time”?
2
“Muso” and “Journo” Usage and Origin
1
On the origin and usage of 'sight unseen'
16
Origin of the slang AmE and BrE usage of “beef”
20
Go “from zero to hero”, usage and origin
3
Meaning and usage of “dead-and-alive”
1
Out of position/place?
0
Should it be “persistent [high] levels of unemployment” or “persistently high levels of unemployment”?