An argument between lovers

Is there an expression to refer to an argument / word fight between lovers (or any two people who are an item, whether married or single)? I'm thinking about those arguments that arise from small things and seem to raise hell for a few hours, or a few days, and end up vanishing into thin air because they were really about something silly or insignificant (or, more likely, because of some insecurity blowing insignificant matters into ungodly proportions).

Something in the sense of: They couldn't live apart for five seconds, constantly declaring their undying love, and yet every other week there they were in the throes of yet another 'lover's argument'.

How about lover's squabble?

From Dictionary.com and Merriam-Webster:

squabble: a noisy altercation or quarrel usually over petty matters

tiff: a slight or petty quarrel

tiff: a small fight or argument about something that is not important

So, according to Dictionary.com and Merriam-Webster, squabble and tiff mean more or less the same thing.

Turning to Oxford Dictionaries, one finds the following:

squabble: a noisy quarrel about something trivial

tiff: a petty quarrel, especially one between friends or lovers

lovers' tiff: a trivial or short-lived dispute between lovers (as noted by @k1earan)

I wonder why the definition of tiff in Oxford Dictionaries references friends/lovers while the definitions in Dictionary.com and Merriam-Webster do not.

EDIT I ran the ngram using options from other answer and comments and as deadrat commented lovers' quarrel is the most used, those of course they don't all mean exactly the same thing.

Also for simplicity, and on principle, I ignored ones with lover's not lovers'. 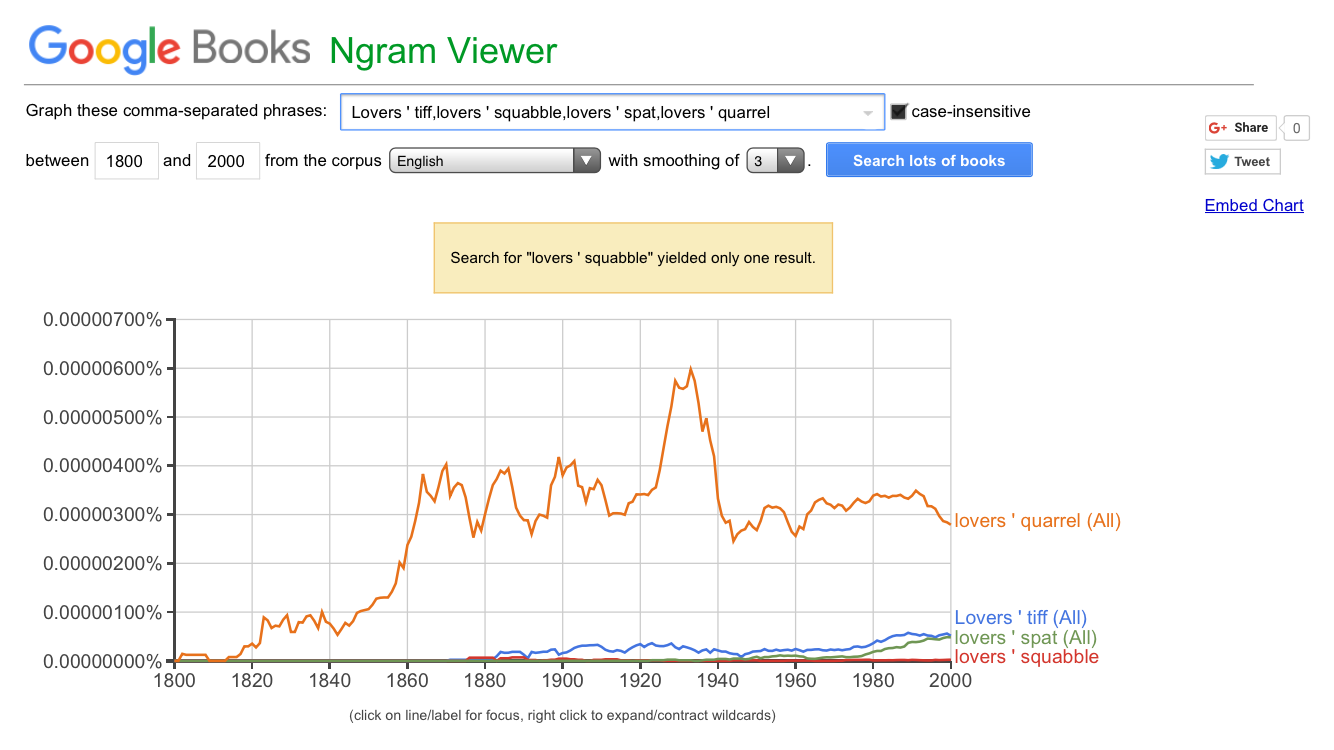 0
How to describe a small meaningless argument / fight?

6
Word meaning “open to being persuaded by a strong argument”?
5
English play on: (Chinese) “enemies and lovers are pre-destined to meet”
18
Is there a name for an argument that is also a counter-argument?
8
A phrase/word for a Logical Jump in argument
0
What do we call yoga lovers? or referring to a healthy lifestyle?
1
Is there an English idiom for “when lovers are fighting, they are just having fun”?
1
A word for an argument which is tentative?
2
Word/phrase meaning fatal blow (in an argument)