Can You Simply Infer Instead Of Inferring That It Was Implied?

My father and I have been caught up in a debate as to the usage of "Infer" and "Imply" for a handful of days now. Finally, disgruntled that we seem unable to reach a consensus, I have turned once more to Stack Exchange for the final say.

It is my father's belief that every time an inference is made it is inferring that something was implied. It is my belief that one can simply infer, without anybody implying and without you inferring that they were implying. Who is right?

When you give your answers, please also give an example too, to make it easier to convey when this discussion inevitable picks up again between my father and myself in a few days time.

It is definitely possible to infer meaning without the meaning being implied. This is often done and can cause arguments and even violence when the inferrer takes offence.

For example a drunk man in a noisy bar could ask the barman for "Another Glenfiddich". The barman, not having heard him properly, might ask "Another Glenfiddich?" and the drunk, thinking that the barman was implying that another whisky was too much, could easily become agressive. In this case there would be no implication but the drunk would be inferring that there was one.

Another example might be that of two teams of mixed age men dressed in sports kit. A member of one team might hear a young member of the other team say "Yes, Father" to an older one and infer that the younger one was the son of the older one, not realising that the other team were a Catholic church side and that the older man was the parish priest. In this case there is no implication and no perception of implication since the remark does not relate to the person making the inference and is not directed to him. However a mistaken inference has still been made.

Of course if the overheard remark was "Yes, Dad", there would still be inference without either implication or the perception of implication but the chance of error would be almost zero.

I suspect, or possibly infer, that your father has been led astray by the oft cited mnemonic phrase 'I infer, you imply' (also seen as 'you imply, I infer') and interpreted it as a structure for the use of infer ie 'I infer that you imply'.
Although the image on that blog shows communication between two people 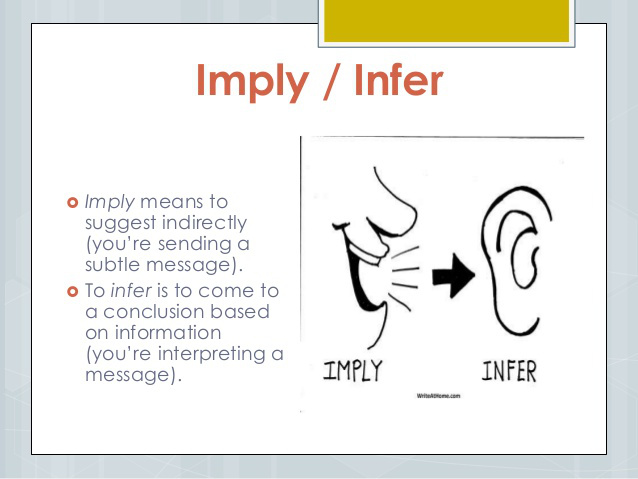 the information that the receiver uses to make an inference need not come from an interlocutor. He could be looking at a forest, see smoke and infer fire.

If it helps to persuade your father, here's is an extract from the Oxford Dictionaries Blog

Remember that imply and infer can be used to describe the same event, but that they present this event from different points of view. Take a look at the following two sentences:

He implied that the General had been a traitor. [presented from the writer’s or speaker’s perspective]

I inferred from his words that the General had been a traitor. [presented from the listener’s perspective]

Not the answer you're looking for? Browse other questions tagged verbs or ask your own question.