According to the Longman Dictionary for Advanced Learners, the verb originate can be used with the prepositions from, with, in, or as. However, it's not clear why I should choose one preposition over the other or even if they are all interchangeable.

1 [intransitive always + adverb/preposition, not in progressive] formal to come from a particular place or start in a particular situation: How did the plan originate?

originate in
Many Christmas traditions originated in Germany.

originate with
The idea originated with the ancient Greek philosophers.

originate as
The town originated as a small fishing port.

So, basically, I'm hoping someone will validate and/or correct my insights.

At and on as well.

Overall your intuition matches what's in the books, i.e. the google corpus. Unfortunately that is often the only way with prepositions to see what they usually collocate with. Well, here we go, let the ngram bombardment begin. Firstly, you rightly picked four out of the top five prepositions used after originate. 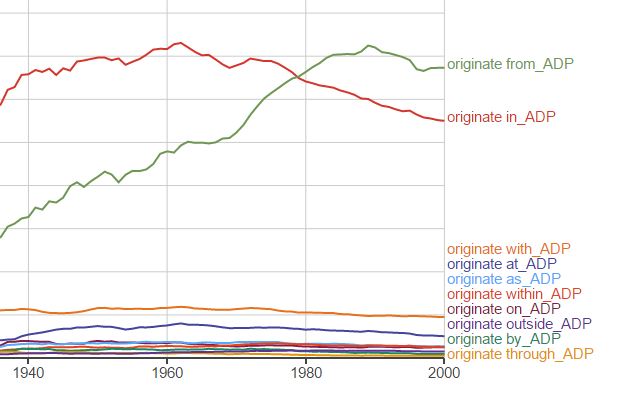 I'll spare us the analysis of what comes after the prepositions, it's the usual determiners, a, the, this, any, etc. Due to the limitations of length in ngrams I had a look at the nouns following our prepositions.

So our top two prepositions match your gut feeling pretty much. From is stronger with physical stuff than in, which actually has two countries and what is likely the start of a few noun phrases (experience, connection, ignorance and causes). Notably God is in both very high and also a toss-up, even including the next preposition.

This is a bit more tangible, the top ten collocations for with are all people or organizations - and of course God.

This one of the top five is not in the question, and it's without many surprises. It goes with places and times. 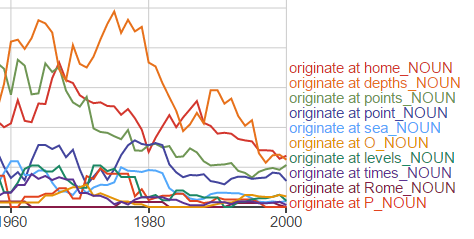 Here we get a bit sciency, the first two are again start of some noun phrases, then the by which google categorizes as noun for reasons unknown followed by a bunch of biology and every science that uses waves.

One thing I want to reiterate, these are the top ten nouns that follow those prepositions in the books google digitized. That does not make any statement about what comes after number ten. That said, for countries in outshines from by one order of magnitude. Thus, for countries in is the better option. When I showed the top collocations for with above it showed people and organizations. However, in is still more popular with Congress. The same is mostly applicable for the rest of the with collocations. The notable exceptions are Moses and Sir. Therefore, for specific people with seems the way to go, although that does not apply to Jesus and God.

9
What is “long” doing in “all (time-period) long”?
1
About the usage of "with" in "There are grey goos everywhere, with many consuming the haemocoels of tardigrades"
4
"To live in" vs. "To live"
3
Part with/from/away
0
Combination 'and' with 'from'
0
Are there any verbs that accept multiple prepositions and as a result differ in meaning?
0
Correct usage of preposition "of" with month and year only