I'm a professional translator looking for an English equivalent of a phrase that literally means 'the phones were hot' (–which doesn't really cut it in English!) I would actually associate a 'hot line' with a direct line between two people, such as the POTUS and Mr Putin. Phrases I have considered include: 'the phones never stopped ringing' (but this doesn't necessarily imply that they were actually constantly in use), and 'the phone system could barely cope' (but that doesn't have much of a ring to it [if you'll pardon the pun]). 'The phone lines were overloaded' is approaching what I'm looking for, but I'd like to find a phrase that is more graphic – more dramatic, in fact. I feel it is on the tip of my tongue, but it escapes me!

Additional info (as requested by a contributor): having thought more about the context, the phrase is used to describe what happened when managers within a huge company all suddenly reacted to a crisis by picking up the phone. Taking all the comments into consideration, the closest I can think of at this point is 'the phone lines were ablaze' (or 'overheating'), while a knowledgeable contributor has explained that 'congestion' is the correct technical term - which opens other avenues.

A standard idiom is that the phones are ringing off the hook.

North American (Of a telephone) be constantly ringing due to a large number of incoming calls:

once the word was out that we had tickets, the phone was ringing off the hook

It certainly isn't restricted to North America; it's used in Britain. It's an idiom because it's technically impossible for it to happen: the cradle is a physical switch which disconnects the bell circuit.

The standard English language phrase would be the switchboard was jammed dating back when all phone calls were routed by an operator. When too many people wanted to place a call they either could not get through or were required to wait longer than normal.

In modern times of IVR and call queues where a busy signal is rare, the lines are jammed still works. http://www.oxforddictionaries.com/definition/english/jam

However if you want to signify heat you could go with the phone lines melted.

Curiously melted does not imply failure or busy signals the way jammed does. Melted means the phones rang red hot.

We actually do have the idiom "burn(ing) up the (phone) lines" with a very similar meaning. I surprisingly can't find a definition, but I think some example usages give the gist pretty clearly:

Tom - You know, I can't get through on the phone at all anymore. Isn't your sister afraid her ear will grow over the receiver?

Daria - Actually, my mother's the one burning up the lines. My idiot cousin is suing her husband for a divorce, and mom got roped into handling it. (Daria transcript, ep. 510)

Secretary of State Hillary Clinton has been “burning up the phone lines” the past five days to try and lay the groundwork for a transition from indirect to direct Israel-Palestinian peace talks, aides say. (Laura Rozen, Politico, 2010)

Paris is burning--up the phone lines

Paris Hilton may be hot, but all of her friends are even hotter. Steamed, that is. Hackers somehow got ahold of the phone numbers stored in her cell phone and posted them online. "I got 100 calls in two hours," Victoria Gotti told New York Daily News. (Chicago Tribune, 2005) 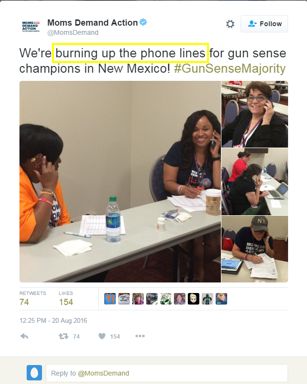 Note that this is something that someone does, so in your example you would need to say something like

The managers responded to the crisis by burning up the phone lines.

The managers were burning up the phone lines.

In my experience, people tend to talk about phone lines rather than the phones themselves to indicate high activity. The phone lines were on fire might do it but I suspect will sound novel to most readers.

It's more commonplace to hear phrases like the phones were lit up, or the phones lit up like a Christmas tree to convey that calls were coming in.

to give someone more of something than they can deal with:

[ often passive ] The company was swamped with calls about its new service.

The White House switchboard was swamped with calls.

Our telephone line was swamped with calls.

The technical term for overloading in a phone system is congestion. The over capacity built into the system to avoid congestion is expressed as the grade of service. So an overloaded system would be highly congested and operating well below its designed grade of service.

I think the 'ringing off the hook' metaphor relates more to a call centre being overloaded - too few agents to handle the incoming call rate. Grade of service relates to the outgoing call rate - is there a free outgoing trunk to give dial tone.

So you need to decide which scenario you are trying to describe.

I believe I may well actually go with: 'the phone lines were jammed'. It is not perfect, in that it still lacks the drammatic element, but it is a close equivalent.

(Additional thoughts would still be welcome.)

Saying the phone lines are "jammed" might be too informal for technical documentation. I think a better phrase would be to say the lines were "constantly busy"

The graphic and dramatic phrase you seek may be:

The phone lines were bursting at the seams.

burst at the seams defined at TFD:

Be filled to or beyond normal capacity.

For example, On her wedding day the church was bursting at the seams, or

That was a wonderful meal, but I'm bursting at the seams.

This expression alludes to rupturing the seams of a garment too tight for the wearer and is generally used hyperbolically.

If the amount of calls received is preventing a party from reaching through, you can also say the "phone lines are all tied up"

Not the answer you're looking for? Browse other questions tagged idioms idiom-requests telephone or ask your own question.

23
Cell phone? Cell? Mobile phone? What's the “correct” term?
7
'Between the lines' or 'read between the lines'
8
Why in a phone call we use “this is” instead of “I am”?
1
“On the other end / side” of the phone line
2
“Who wants to know” on a phone conversation
3
A word or phrase for phone service working only one-way
5
How was “tin can phone”/“string phone” called before telephone invented?
0
To keep between the lines