Question about a sentence from the novel “Possession”

I have a question about a sentence in this extract:

The London Library was Roland's favourite place. It was shabby but civilised, alive with history but inhabited also by living poets and thinkers who could be found squatting on the slotted metal floors of the stacks, or arguing pleasantly at the turning of the stair. Here Carlyle had come, here George Eliot had progressed through the bookshelves. Roland saw her black silk skirts, her velvet trains, sweeping compressed between the Fathers of the Church, and heard her firm foot ring on metal among the German poets.

Possession A Romance by A. S. Byatt.

I am not very clear about the meaning of sweeping compressed.

I am not very clear about the meaning of ring on metal.

The long velvet train of a dress 'sweeps across' the floor, trailing behind the novelist George Eliot, and Roland imagines she is still a visitor and researcher in the Library. Perhaps writing 'Mill on the Floss.'

George Eliot is compressed because she is only glimpsed between the heavy Patristics books on the shelves.

'Ring' as you guess describes the sound of (leather) shoes on the cast-iron galleries and stairs. 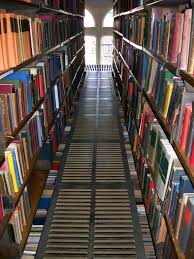 Not the answer you're looking for? Browse other questions tagged meaning-in-context literature complex-sentences or ask your own question.