Consider the sentence "I can run faster than 15 miles per hour." Its meaning is clear and to my eyes obviously grammatically correct. Now let me present some variations that have given me trouble for a long time.

So which of these constructions is correct and which is incorrect? Is there a general rule that I can follow?

The scholarly article Syntactic isomorphism and non-isomorphism under ellipsis may be of great interest to some readers!

Once we accept that the elided constituent and its antecedent can differ in form, it becomes reasonable to ask how large this difference can be. The answer in Rooth (1992), Fiengo and May (1994), Chung et al. (1995) and subsequent work is that the wiggle room is actually quite small: the elided constituent and its antecedent are allowed to differ only in the realization of inﬂectional morphology. Other than that, both constituents have to be syntactically and lexically isomorphic.

You find both accusative pronouns (me/him/her/them) and nominative pronouns (I/he/she/they) in this syntactic position in standard English. The forms with the nominal genitive pronouns (mine/yours/hers etc.) are a red herring because they stand for something possessed rather than the person themself.

The traditional rule for comparison with a person is that you must use nominative. However, according to my research, accusative is more common.

I searched the Corpus of Contemporary American English for this syntactic structure, followed by a comma or a period to ensure we are not looking for cases like faster than he is, with a verb following the pronoun, in which case nominative is obligatory. 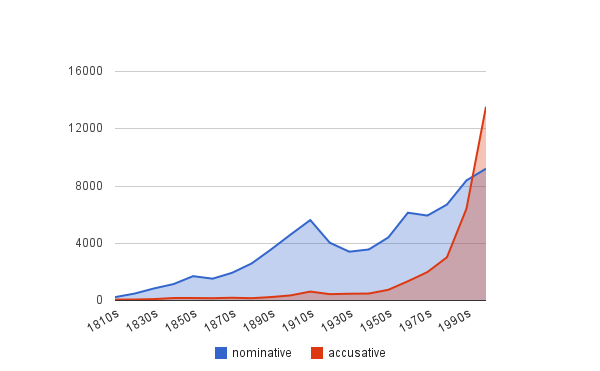 As you can see, until the late 1980s, the formal usage was more common than the informal usage. Since then, however, accusative has very rapidly eclipsed nominative, even in this corpus, which represents professionally published works.

Ah, you've stumbled onto a controversy even the experts haven't completely settled. It all depends on whether you think than is a conjunction or a preposition.

If than is a conjunction, then it's joining two complete sentences, and the "am" that you mention is the implied predicate of that sentence. In that case, "I" is the correct subject. (Except where's the comma you normally would use before an and that joins two sentences?)

Consensus seems to be on the side of the "conjunctionists" -- even if common usage isn't. I always use than like a conjunction in writing, but in speaking, I usually find myself using it as a preposition because it feels more natural somehow. So I guess I have a foot in both camps. ;)

There's an excellent discussion of this at Grammar Girl's blog.

The prescriptivist answer is that ‘He is taller than I’ is correct. The justification often given is that the sentence is an ellipsis of ‘He is taller than I am’, but this appears to be an ex post facto justification of a somewhat arbitrary preference: modern linguistic analysis shows this kind of verbal ellipsis is impossible in other similar contexts and is therefore unlikely to be occurring here. To quote Alan Munn, a linguist who does research in syntax, ‘There's no syntactic evidence that the position after “than” here is a subject, so the accusative is the only linguistically sane form’. If I remember correctly, data on real spoken English show that me is considerably more common than I in this kind of construction.

In formal writing and speaking it is probably safest to use the prescriptively correct ‘than I’; in any other context ‘than me’ is not just acceptable, but normal usage for a majority of speakers. Indeed, in many contexts the use of ‘than I’ will strike a great many people as unduly formal, the sign of someone who ‘talks like a book’.

"I can run faster than he." is technically correct, because it is short for "I can run faster than he can run." In fact, you are comparing your speed to his speed, not to him personally. This shortening of the sentence is called an elliptical construction, because the remainder of the "he" clause is understood. The tendency is to treat "than" as a preposition. (See also Safire on this point.)

Both are possible English sentences. In the first, than is a preposition, and pronouns that follow prepositions are normally in the objective case. In the second, than is a conjunction and joins the clause He is wiser to the clause I (am).

The first construction is less formal than the second, and is probably used by native speakers more often. The second might be used by speakers afraid that if they used me they would be making a mistake, but, in almost all contexts, they would not be.

To me, using "I" always gives an impression that more words are following.

She is older than I am.

She is older than I thought.

While using "me" will just finish the sentence.

She is older than me.

The grade school grammar argument is problematic. Words can take different types of complement. There's little reason to suppose that just because "as" can take clause as its complement, every complement must then be a clause.

Really this is a case for just saying what comes naturally to you and devoting your brain (and education budget) to other things...

By parallelism, there's an implied verb at the end of the sentence: "She is older than I am." So "She's older than I" is the generally accepted version (and the version that sounds correct to me.)

But you could make an almost-as-convincing argument that "me" is the object of the prepositional phrase "than me"... so this one could go either way.

I personally find myself "natural" to use any of them maybe because that was what I learnt in my English class. But for long sentences with similar comparisons (I can not think up an example right now), a solution like the first sentence always eases my mind when I read it (although it is grammatically incorrect). Perhaps because it is shorter while I can still understand what the writer wants to say.

Consider the sentence "I can run faster than 15 miles per hour." Its meaning is clear and to my eyes obviously grammatically correct.

Sorry, but that is, as you say, "obviously" only common. Whether it is not only common but also gramamatically correct is for discussion.

II Even more, not only does there exist no such thing as a fast speed (there's high speed), but you're making a comparison between running and being. Look at the extended sentence above. In it, you RUN (fast), but the referenced speed IS (fast). You compare the manner (A) of action (B) with the quality (C) of object (D). A=fast, B=run, C=fast, D=speed. You may think A and C are one and the same word, but you'd be wrong. You were forced to compare an adverb (fast) with an adjective (fast), which here didn't seem all that problematic, but that's only because the particular adverb fast and the adjective fast accidentally happen to be morphologically identical in English. In English, the adverb is not "fastly"; it remains without the suffix "-ly" (the English rule of adverb creation took the back seat here to the historical convention). Nonetheless, A is an adverb. You would easily see that A and C are, actually, two different words if you were a bad runner: "I run more slowly than the 15 MPH is slow". See? Slow-ly and slow. Two different things. One for an action, one for an object. Apples and oranges. DO something more slow-ly than SOMETHING is slow? Say what now? Those are two sets of incomparable things [(action, adverb), (object, adjective)], just as there are two incomparable sets of things in "do something faster than something is fast". Or more specifically, in "run faster than the speed of 15 miles per hour is fast". Or to be totally specific, in "I can run faster than 15 miles per hour."

Therefore, your first sentence is not "obviosly" grammatically correct.

But I do accept that it may be agreed by the English linguists that such a sentence be grammatically acceptable. Many incongruent things are acceptable in all natural languages, as is the case with the adverb "fast" lacking the suffix "-ly". A group of authoritative people gets together, compares their notes on the usage of English in the real world and decides: "It's OK, never mind that it breaks some rules or even logic. Let it be." I don't have a problem with that. However, in your discussion, you've tried to use the questionably acceptable exception to rules and logic, as a reference point for your further reasoning. To that, I do object.

This is an incomplete comparison. You are shorting

Thus, the correct word to use is "I."

Not the answer you're looking for? Browse other questions tagged word-choice grammaticality pronouns comparisons grammatical-case or ask your own question.