What caused bell peppers to be called capsicums in some countries?

I have read this answer on the question "Why is the word “pepper” used for both capsicum (e.g. bell pepper) and piper (e.g. black pepper)?", and it contains some useful etymological information. 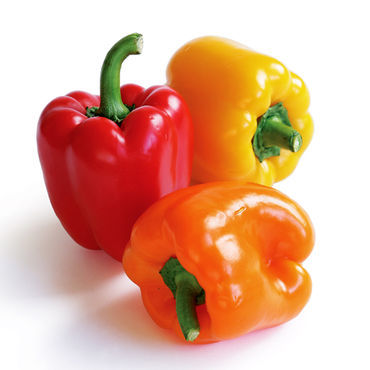 I've noticed that what name we call Capsicum annuum by seems to depend on which country we are speaking English in. For example, Australia, India, Pakistan, Bangladesh, Singapore and New Zealand use Capsicum.

A person working in an Indian supermarket was shocked when I told her it's called Bell Pepper in the US, UK, Canada and Ireland. I had to pull out Wikipedia to convince her it was true. (Probably because she associated pepper with the spice.)

What is the historical/etymological explanation for this divergence in names between countries? How did former British colonies end up using a different name from what the UK uses today?

Specifically, these plants are native to the Americas, where they were in cultivation long before Columbus arrived. They thus would have been first encountered by English-speakers in the Americas as a "going concern". The various fruits would likely have been a welcome and even necessary part of European Americans' (in the continental sense) culinary repertoire.

Names for such common plants and foods would have been practical, and might have arisen from indigenous terminology (chili); analogy with known, old world ingredients (pepper); or descriptive terms (a "pepper" that is bell-shaped = bell-pepper).

In other parts of the world, on the other hand, the plants would have first been known as exotic cultivars, and might have made their way into ordinary cultivation and kitchens by way of botanists, who would naturally be more concerned with precise terminology. Places introduced to the plants after this naming was established would be more likely to use it.

The OED's evidence supports the hypothesis that pepper is the older English term for the fruits of genus Capsicum. The OED attests this usage to 1578:

Thus I think the sequence of events might have been:

If this is correct, I would expect the term Capsicum to be least familiar in the Americas, most familiar in non-American colonies and non-colonial parts of the world, with perhaps some non-scientific usage in Europe. (I can confirm that it's very unfamiliar in the US, but not the rest.)

"Christopher Columbus encountered chilies on his first voyage to the Caribbean in 1492 and though he did not bring any back on that voyage [they were taken to Spain on his second voyage in 1495], he does write of “a ‘pepper’ that the natives called ‘Aji’ which was better is taste and nature than ordinary peppers”. [‘Aji’ is a caribbean word for chilis] Wanting to prove that he had opened a new easterly route to the Indes, Columbus was keen to associate Aji with Asian “pepper”." https://www.iosrjournals.org/iosr-jhss/papers/Vol.%2022%20Issue7/Version-9/D2207093236.pdf

Apparently, it was similar to how he called the people who lived there "Indians"...

Also - long pepper which was used in india at the time prolifically, looks a lot more like chilli then single peppercorns do. https://en.wikipedia.org/wiki/Long_pepper

Not the answer you're looking for? Browse other questions tagged etymology history dialects variants biology or ask your own question.

7
Why is the word "pepper" used for both capsicum (e.g. bell pepper) and piper (e.g. black pepper)?

11
What is the origin of "rings a bell"?
30
Why are knobs called "pots" by some sound designers?
9
why do some people call green peppers mangoes?
1
Is the acronym "PET" only used in some countries?
10
What were Red Admiral and White Admiral butterflies called before 1627?
0
What is it called when some pronounces their “t” sharply
2
What caused the spike in usage of Shone just before 1600?
22
Countries ending with -Y vs. -IA: What is the pattern?