How can the Chinglish expression “you can you up” be translated?

The Chinese phrase 你行你上 (literally "you good you up", usually expressed in Chinglish as "you can you up") is used against people who criticize the incompetence of others, yet are not competent themselves. The meaning is basically, "if you know how to do it so well, then you do it!"

Is there an idiomatic phrase in English that conveys the same idea?

Consider If you talk the talk, then walk the walk. It means, essentially, if you brag that you can do something, then do it.

It is a variant of the more general scheme talk the talk... walk the walk, defined by Cambridge as:

(informal) If you say that someone talks the talk but does not walk the walk, you mean that they do not act in a way that agrees with the things they say.

An alternative is put up or shut up, defined as follow:

(informal) If you say someone should put up or shut up, you mean they should either take action in order to do what they have been talking about or stop talking about it.

If someone claims that they can do something better than someone else, the second person could respond: "Put up or shut up."

This expression might more accurately reflect the tone of the Chinese expression, since it carries (or can carry) a slight hostility.

The following phrases and their variants are very similar to your translation of "if you know how to do it so well, then you do it!", but are fairly common in situations like the one described, maybe so common as to be considered partially idiomatic:

Let's see you do better*

is apparently common enough that it's the name of a TV Trope and a(n alleged) logical fallacy. 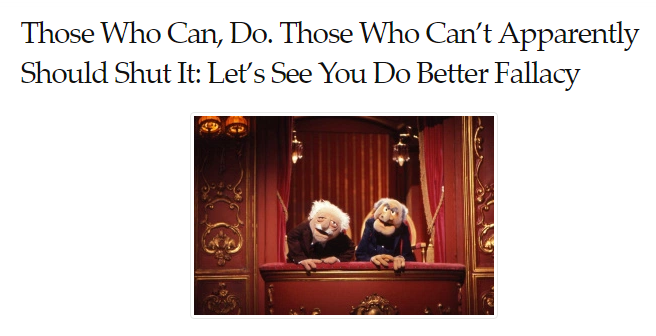 Note, though, that it strongly rubs some folks the wrong way, as suggested in the links above and the many other similar complaints.

It can be used when someone is directly criticizing you, but also when someone is criticizing a third party. In fact, most of the instances where it is described as a fallacy refer to people criticizing a professional (filmmakers, game designers, etc.) in an area where they themselves have no expertise. But as, for example, a response to one's spouse's complaint about how the laundry is folded, I think it's perfectly logical (if still perhaps impolitic).

*Also phrased as I'd like to see you do better.

If "You Good, You Up" refers originally specifically to a combat sport or violent situation then yes "Put up or shut up" would match tone, otherwise walkthe walk might be a better fit

The origin of "Put up or shut up" is an invitation for someone to put up their fists, in preparation for a fight.

1858 Marysville (Ohio) Tribune (Electronic text) 21 July, Now, if he means business, let him put up, or shut up, for this is the last communication that will come from me in regard to this fellow.

Another newspaper quote with more context 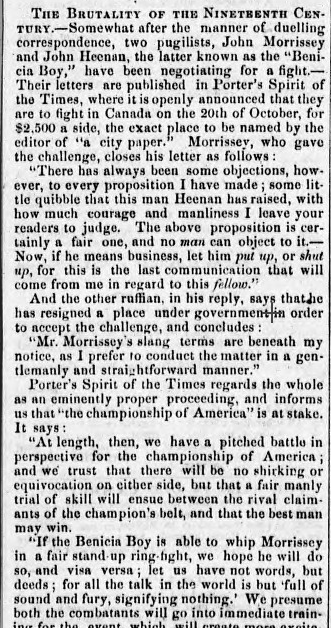 If they weren't prepared to do that then they should shut up as their comments were causing offence. This derived directly from the phrase "Put up your Dukes" which was used as early as 1859 as claimed in Dalzell's The Routledge Dictionary of Modern American Slang, and also heard countless times from John Wayne in various westerns whilst I was growing up

As a British English speaker, my only interaction with the phrase "Put up your dukes" was through American spaghetti westerns, and the phrase "Put up or shut up" was never in common parlance in my youth so I'm certain derives from this situation of agitating for a fight

There are some English sayings that may convey what you're looking for.

"The best place for criticism is in front of your mirror."

"Don't talk the talk if you can't walk the walk."

I, for myself, would probably say: "If you don't like it, do it yourself", which would be readily understood by any amoeba.

The main one that’s similar to the pot/kettle/black one is people who live in glass houses shouldn’t throw stones, which is explained by the Cambridge English Dictionary:

This means that you should not criticize other people for bad qualities in their character that you have yourself.

A similar phrase from the Bible is

Why do you look at the speck of sawdust in your brother’s eye and pay no attention to the plank [or log or beam] in your own eye?
[source]

And why beholdest thou the mote that is in thy brother’s eye, but considerest not the beam that is in thine own eye?
[source]

which appears to mean that you should not criticize other people for bad qualities in their character that you have yourself to a much larger degree.

A little bit less literal and more generic expression that can be used would be "The pot calling the kettle black", which means generic "a person is guilty of the very thing of which they accuse another"

(as opposed to specific "a person is guilty of not knowing how to do something but criticizes others for it" as in the original idiom).

There is no idiom that I can think of for criticizing someone in a situation where the critic also sucks at the task.

Sometimes other idioms are referenced to make the critical person realize that they're doing that. Common examples are:

These aren't idioms in themselves—they only reference common ones. The idioms they reference are not really about being critical while not having skills to do the task yourself. But they are close enough.

Where I'm from, a common response when someone suggests that something needs to be done better is "Well volunteered!"

(Though it can also be used in other circumstances, such as when someone points out that something isn't being done at all and needs to be done.)

The classic story of this attitude is Aesop's fable of The Young Crab and His Mother. The version of this story told in Aesop for Children runs as follows:

"Why in the world do you walk sideways like that?" said a Mother Crab to her son. "You should always walk straight forward with your toes turned out."

"Show me how to walk, mother dear," answered the little Crab obediently, "I want to learn."

So the old Crab tried and tried to walk straight forward. But she could walk sideways only, like her son. And when she wanted to turn her toes out she tripped and fell on her nose.

[Moral:] Do not tell others how to act unless you can set a good example.

This is a fairly well-known idiom. Usually it's used to mean that a teacher doesn't really know what they're talking about (i.e. that their teaching is at least somewhat bogus).

Using it to call someone out on their ability to do the thing in question is closer to the literal meaning. It's only consistent with the idiomatic meaning if you think they're actually wrong, not just annoying.

Still, if they're taking the time to "teach" you something, you could use it anyway. It's a well known phrase, and they will know exactly what you're trying to call them out on.

Something similar is expressed in

i reckon a better fit is to tell the speaker “you are all talk and no trousers”. this is a variant on “all talk and no action” but to my mind speaks also to inability as well as inaction.

5
How can I translate “Jeitinho Brasileiro” into English?
10
Word or phrase for literally and figuratively?
5
Is there a name for letting something get worse until it is so bad it has to be addressed properly?
10
English equivalent of two popular Chinese slang terms: 学霸 (academic overlord) and 学婊 (academic bitch)
2
Describing a group consisting of groups of people
8
Is there any English equivalent to the Portuguese proverb “days of plenty, nothing’s eve?”
0
One or two words for a person with blind spots?
20
Describe that someone’s explanation matches your knowledge level
0
How would you say “it is not an uncommon belief that X's solution ends the search for a solution of problem Y”?
13
Is there an English equivalent of the proverb 水清ければ魚棲まず (if the water is clear, fish won't live there)?