What is the origin of “cold weapon” in the sense of non-firearm?

I came across the term while looking around for an answer to this question about a term form non-firearms. Cold weapon does not appear with this sense in any established dictionary I could find, but you can find it in Wikitionary and a number of books. See some examples in my answer to the question and also the images Google returns for cold weapon.

Now my question here is: when and where from did the term originate?

Etymoline doesn’t have it, and Goole Books Ngram doesn’t help much because most instances of cold weapon refer to a firearm that is cold after a period of inactivity or to any weapon that feels cold. Pretty much every instance of cold weapon as a non-firearm I’ve come across has to do with China or Russia. So I wonder whether the term is a direct translation from Russian or Chinese.

It seems you're quite right about the translation origin, from Russian. It's a rare term, but which get regularly used by people familiar with Chinese or Russian Military History.

This is a journal partially authored and fully edited by the famous victorian writer.

In a section called "How to make soldiers"

...to accustom him to see clearly through a mass of crossed swords and bayonets and to remain cool while swords flash under shocks unexpected blows and rapid orders. A fencing room in which twenty or thirty couples of men are practising is a fair illustration of a melee with cold weapons

First use I found which also explain the origin of the term in pseudo phonetic transposition: 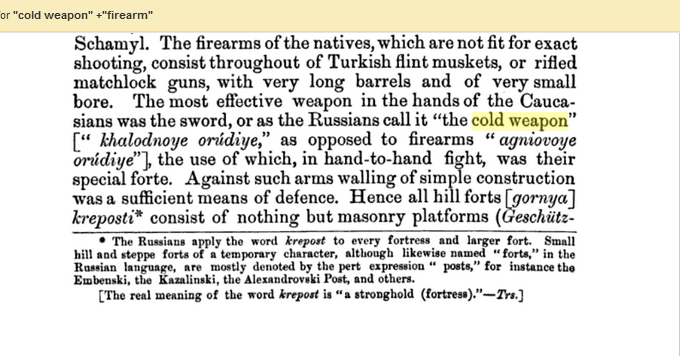 It seems to be the earliest reference in English. Anything before that relates to the actual coldness of steel.

Some other references of usage of the term across the last 150 years, still influenced by the Russian origin though.

Gustavus Adolphus: A History of the Art of War from Its Revival ..., Volume 2 Par Theodore Ayrault Dodge, page 571

"penetrated and animated by this truth, that in fire the bullet should be cold— and the cold weapon, warm; more clearly stated, that we must fire with calmness and deliver the assault with fury. To sum up, both Russians and Japanese appear ..." 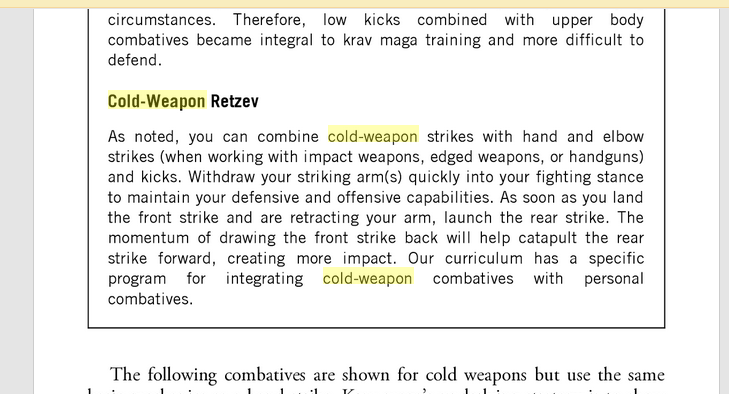 I came across this term searching for a halberd indexed in a Russian Medieval and Renaissance Warfare Encyclopedia. "холодное оружие II", literally "cold weapons 2" was a list of historical halberds. "Cold weapons 1" was an index of war hammers. One translation called it "steel weapons" while the couple others were "cold weapons".

2
What is a term that talks about non-firearm weapons?