Does the term "Asian" have different meanings among various English-speaking countries?

I have always had the view that the term "Asian", when pertaining to cultures, primarily refers to the cultures of the Far East. Recently I have been told that it also includes Indian and other cultures located on/around the Indian subcontinent.

For reference, I am a native speaker of American English. Would anyone be able to shed some light on whether there is a generally accepted usage in the various English-speaking countries?

For example, it seems unnatural to me to refer to a person from India as "Asian", even though I am aware India is geographically located within the continent of Asia.

Like all questions dealing with complex issues, the answer is very simple; it depends.

Geographically, any resident of the Asian continent, which is historically bordered by the Ural Mountains and Red Sea on its west side and by oceans to the north, east and south, is an "Asian"; they are a person of Asia.

However, in more common parlance the term tends to exclude Russia, what we currently call the "Middle East" including Pakistan, and the countries in the "Indian sub-continent" including India proper and other nations to the southwest of or in the Himalayan range such as Nepal, Bhutan, etc. This leaves primarily Mongolia, China, Southeast Asia, Japan, the Indonesian archipelago and most other Western Pacific Islands besides the Australasian islands.

This was not always so, especially in terms of India; during British colonial days, the Indian people and those in neighboring territories were termed "Asians". The two terms were at one point roughly synonymous, as the entire region from the Horn of Africa to Southeast Asia was once known as the "East Indies".

Asia is everywhere from the Caucus mountains to Australia - including the middle east, India, China and Siberia.

There is a difference in common usage, in AE it seems to imply China/south-east Asia more than India. While in BE 'asian' would be more likely to refer to someone Indian/Pakistani.

I'm guessing it's mostly just the relative populations of each group in Britain and America.

Here in Britain, in my experience Asian commonly refers to people from the Indian subcontinent, more so than people from the far-east. I'm sorry I don't have any citations to back this up though. If anyone has any, I'd be happy to add them here.

Strictly speaking Asian means anything related to Asia. A good reference for these boundaries is Wikipedia: 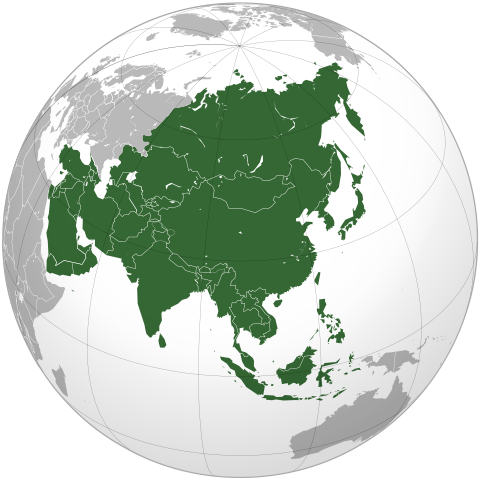 Other terms related to the area include Oriental, Far East and so on. These tend to refer more directly to the associated cultures of Asia, however, and typically do not extend very far north. For instance, Russia and the surrounding area is not considered Oriental. But these terms are also somewhat varied and I again recommend Wikipedia to help clarify any questions.

It's not only different between American English and Commonwealth English, but also between countries within the Commonwealth.

I've learnt from The Bill that for the UK, "Asian" includes people from India, whereas in Australia, I suspect we'd say that they're from the sub-continent. Maybe this is because Australia has more people from what Australia would call Asia (China, Vietnam, etc.) compared to the UK.

As an Asian from an English-speaking country, I'd advise using this word to refer to all, and only, people who are ethnically from Asia. (You wouldn't call Richard Dawkins an African scientist or Doris Lessing an Iranian writer, would you?) English has enough words/phrases to make finer distinctions when needed Middle East, Far East, Central, South East and South Asians. These phrases are neither unusually long, nor too rare to be commonly understood. In fact, these words, conveniently refer to well-defined economic zones too, and are the preferred terms in commerce.

Excluding any Asian from what you mean when you say "Asian" would just confuse many Asians, and maybe even non-Asians not from your part of the world.

"Asian," has, at times, been defined by its "proximity" (lack thereof, actually), to Europe. In this regard, "East Asia" (Japan, Korea, China, etc.) is the most "Asian part of the world. This is followed closely by "Southeast Asia," basically the lands on the "Indochina" peninsula and the Indonesian and Philippine Islands, collectively known as the "ASEAN" nations.

India and surrounding countries form the Indian subcontinent, and is called South Asia. It is less remote than East Asia, and its people are more "Caucasian" than the inhabitants of East Asia.

North of India is "Central Asia," the "Stan" countries like Turkestan and Uzbekistan,etc., as well as "North" Asia (Mongolia and Siberia), that are technically part of Asia, but whose people have migrated back and forth between East Asia and Europe, mixing with both, and are therefore less "Asian" than East Asia.

West Asia consists of the "Middle East" and the Saudi Arabian peninsula, which border on Europe and Africa, and is therefore considered less "Asian" than East and Southeast Asia. As in the case of India and central Asia, the people are also more "Caucasian."

As an inhabitant of India by birth, I would like to share my viewpoint with the community. Actually, IMHO, the problem arises because Asia is a vast continent (the biggest AFAIK) and therefore a different number of cultures, casts and creeds from different religions reside here. It's literally so vast and full of diversity that even from a North Indian you can easily differentiate a North-East Indian who is significantly different from a proper East Indian who in turn differs from a west Indian in terms different human traits. This is just an example of only the country India. So now consider how big, vast and diverse the whole Asia would be. So I definitely in accordance with Prash that using different terms would be more efficient to clearly make out about which part of Asia you are talking, like, Middle East, Far East, Central, South East and South Asians etc.

So technically speaking you are right in calling a Japanese or an Indian or a Saudi Arabic an Asian, but it would be not fruitful at all. Just so that you feel it, consider a French, a Spaniard and a Scott come here and we call all of them European. It would be too general to say, categorization would be more efficient here.

Now calling somebody Asian would readily mean different to an American from a British. For historical reasons (explained nicely in other answers), a British would expect an Asian to be from Indian Subcontinent (a census result is given by somebody from Britain in some comment to another answer proving a lot of people from Indian subcontinent living there) whereas an American would expect a Chinese most likely. In fact AFAIK, some Indian languages dominate parts of Britain as too many people from Indian sub-continent live there!

Also, as a side note, "Middle East" does not necessarily mean countries who have more Muslims in their population. See this:

62% of the world's Muslims live in Asia, with Indonesia, Pakistan, India and Bangladesh having the four largest Muslim populations in the world (Wikipedia)

Middle east is those countries which literally are situated in middle East.

Not the answer you're looking for? Browse other questions tagged meaning word-usage ethnonyms or ask your own question.

13
Why did the descriptive "Orientals" shift into a pejorative?
14
Proper term for people from eastern Asia
11
Why don't Americans refer to Indians (and others from the subcontinent) as Asians?
2
What is an appropriate replacement for the term "oriental" when used as an ethnicity?
2
Is there a more-accepted synonym to the term "Commonwealth English"?

3
Does the word “umpty” have two different meanings?
1
Does this sentence have two different possible meanings?
1
Usage of "tum" in English speaking countries, other than the UK
2
Does "qualitative" have two meanings?
1
How did the various meanings of "fare" come about?
3
Why does "eastwardly" have two opposite meanings?
0
How many meanings does the term "Brand new" have?
10
When did Asian come to mean only certain parts of Asia such as the East?