Are “to medal” and “to podium” verbs? [duplicate]

I have heard the word medal used as a verb recently by members of the (BBC) Rio 2016 commentary team and on occasion to podium even slipped in - is this a common phenomenon? 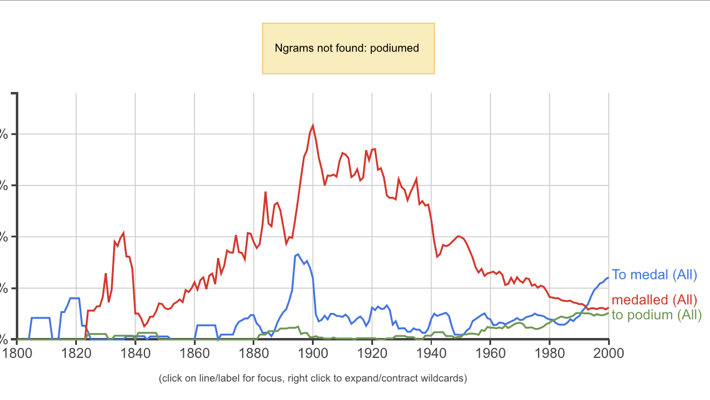 (N.B.: Ngrams only looks at written language so it's apparent decline recently is probably not representative of its overall usage)

the OED lists examples of using "medal" as a verb as long ago as Byron, in 1822: "He was medalled." [The modern usage is] dated by the OED from 1966: "to win a medal (i.e. to come first, second, or third in a sporting event or competition)". (The Guardian - style guide)

Podium as a verb has no such illustrious history with a more minor usage in mainly athlete circles. My Ngrams search (see above) finds to podium has a small, recent use but podiumed is not found (and is highlighted as a spelling error). It is listed in the OED but as mainly in AmE.

(Of a competitor in a sporting event) finish first, second, or third, so as to appear on a podium to receive an award:

Are these words mainstream verbs or are they merely seasonal, and don't see use outside of commentary and competitor circles?**

The following extract from Oxford.blog examines the two terms and their usage as verbs. It appears that their verbal use is often related to sports events like the Olympic Games during which you can notice a spike in usage:

From an etymological point of view, to medal as a verb dates back:

I tried the Oxford English Dictionary. Some interesting results...

1865, T. Lyman in G. R. Agassiz Meade's Headquarters The medal was of gold, three pounds in weight... ‘I believe, sir, you are the first man who medalled with his battalion.’

1948, Portland (Maine) Press Herald I podiumed as I had never podiumed before, because Eleanor was on the dais next to me.

Not the answer you're looking for? Browse other questions tagged word-usage verbs verbing or ask your own question.

6
Is verbing in “I medalled in volleyball” etc correct?

2
Verbs for “and” and “or”?
13
Which nouns can be used as verbs?
2
Linguistic name for “general action verbs” and “specific action verbs”
2
What are the rules for combining verbs with and?
4
Are modal verbs and auxiliary verbs actually verbs?
7
Are 'glimpse' and 'glance' interchangeable as verbs?
1
Verbs that describe user Do's and Don'ts