Quite often - particularly in the media - I see British examples of things being referred to "A Very British... " whatever it is

e.g. a documentary about the British building their first nuclear bomb was called "A Very British Bomb" - but, OK it was British in that it was made in Britain, but I couldn't see what was "very" about it... (It didn't spray tea and crumpets everywhere or anything)

A quick google search for "A Very British" shows up loads of examples, but noticeably a book from 1982 called "A Very British Coup" - are they all spawning from that or is it just another example?

To clarify, I'm not just talking about the words "very British" but more the commonality of the use of "A Very British" (I'm not sure of how I'd explain - perhaps that needs another question!) almost as a title or a self-contained grouping of words.

For example: If I asked you where does the common usage of the words "Big Brother" come from, you might say George Orwell's 1984 (if not the TV show! But even there it originates with 1984) - it has a specific use outside just a brother who's big. You probably wouldn't tell me there's nothing special about "big brother" just because a google ngram shows that "little brother" is used more than "big brother"

I think that they are, intentionally or unintentionally, referencing that book, which was also made into a 1988 BBC Channel 4 TV series.

When the coup is described as "very British", I believe that they mean "non violent and polite", compared to, for example, military coups in South America which are often very violent and disruptive. In contrast, the "coup" of the title merely involves political machinations involving the civil service and newspapers, via a publishing magnate.

So, to describe something else as "A very British X" carries the implication that it is non-violent and relatively "gentlemanly" compared to what one might normally expect.

In the case of "A very British bomb", I agree that apart from being made in Britain, I don't think there's anything stereotypically British about it, and I don't think it really deserves the implications I refer to above: I don't see how a British nuclear bomb could be more "polite" than an American one for example. I think it's just a bit of lazy titling.

Alternately, the phrase may actually just be taken to mean "Something happening in Britain which you wouldn't normally associate with Britain."

As an aside, the plot of the novel actually seems very similar to what is happening with Jeremy Corbyn, the head of the Labour Party, at the moment, and if Rupert Murdoch started colluding with the civil service to bring him down then it would actually mirror the plot perfectly. We'll have to wait and see...

This is a snowclone title format, likely inspired by the book/documentary that you and Max Williams have identified.

From the Wikipedia article linked above:

In other words, someone coins a catchy phrase, and other folks latch onto it as a MadLib for their own purposes.

I note that this snowclone is catchy enough that it was co-opted for the brand-specific "A Very Brady X": A Very Brady Christmas actually aired in December 1988, the same year as the A Very British Coup television series, and has since spawned A Very Brady Movie, A Very Brady Sequel, etc.

For those who are not sure that this is "a thing": Ngram is case sensitive, so for a title snowclone it's important to use title case. 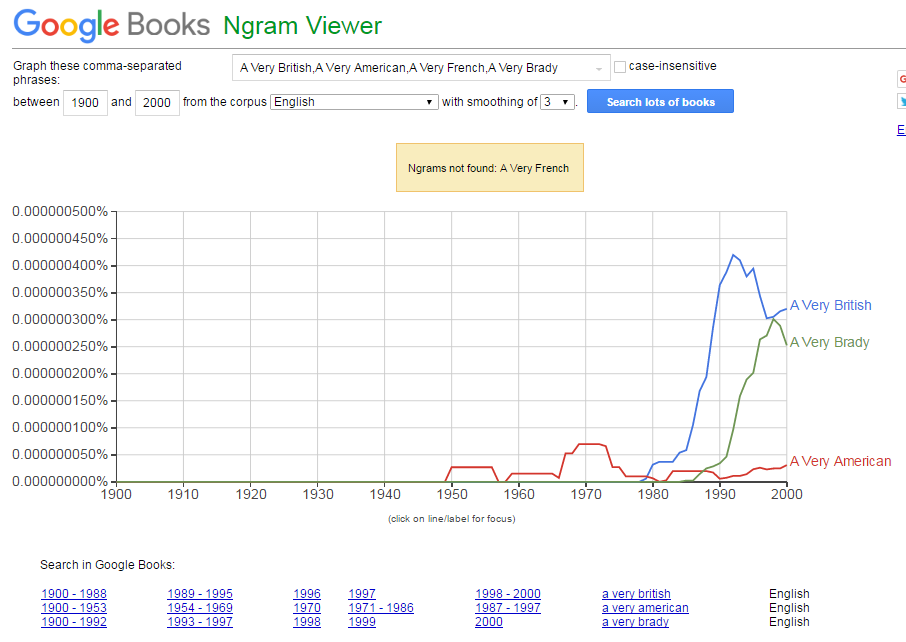 I'm not sure why this particular template has caught on; possibly the order of words sounds in some way British. For comparison, the phrase "A very good day to you, sir!" sounds vaguely British to my (American) ear. It's also possible that the Brady version has reinforced the original, as familiarity helps the phrase just sound right.

I also note that this kind of superlative for nationalities isn't unique to this phrase; a similar, more pervasive snowclone is "All American X":

In fact there appears to be nothing exceptional about the phrase a very British. Here's from Google Books Ngram:

Apologies for such a simple observation, but this seems to clinch it in favour of your theory:

Use of the phrase "A Very British" (with capitalisation) commences with use of that title (although slightly before the book's publication for some reason), and does not diversify until around the time of the TV series. So, while not all users necessarily are referencing A Very British Coup intentionally, so far as Google's corpus is concerned that's where it started. Before A Very British Coup people didn't appear to use A Very British at all.

To my untrained eye, the rate of climb of "a very British" seems also to increase following the TV series, but it's less blatant:

I disagree substantially with Max Williams. As jacinto points out, the phrase is used long before the 1988 show he refers to, and doesn't even show a noticeable spike after it. It's hard to understand why the title of the show would have been chosen if the phrase wasn't understandable to viewers.

Calling something 'British' can mean a number of things. A British car can be built in Britain or designed in Britain. A British athlete is a British citizen. But one of the meanings is "British in style" or "embodying qualities thought of as British". It's that meaning that is usually carried by "very British".

An athlete born in Britain is British, but if they are also load, brash and aggressive they would not be considered "very British" (since those are not qualities typically associated with Britishness). One who was understated and restrained might be.

The show "A Very British Coup" certainly reflects that. The coup in question is not only British in that it takes place in Britain, but also displays the stereotypical characteristics of Britishness. But I don't believe it is the origination of the phrase.

Not the answer you're looking for? Browse other questions tagged etymology phrase-usage or ask your own question.