It isn’t the mountains ahead to climb that wear you out; it’s the pebble in your shoe.
-- Muhammad Ali

I'm very fascinated by this quote, so I'm looking for expressions/idioms that are roughly equivalent to it. The one I'm looking for would be shorter and can be easily used in conversation.

I believe this quote1 can be paraphrased as

It's the little things that wear you down.

Somewhat to my surprise, this phrase (and the similar It's the little things that trip you up) doesn't appear in common lists of idioms, but the set phrase is fairly common, and I find it in Google Books back to 1971.

A typical usage would be

It needn’t be a catastrophe that knocks you off your feet while you’re chasing your expat dream – often it’s the little things that wear you down gradually. (Expat Focus online article)

Or this blog post, titled "It's the Little Things that Wear You Down", about the large impact of getting rid of small household irritants.

This phrase is sometimes associated directly with the quote you reference (and Ali): 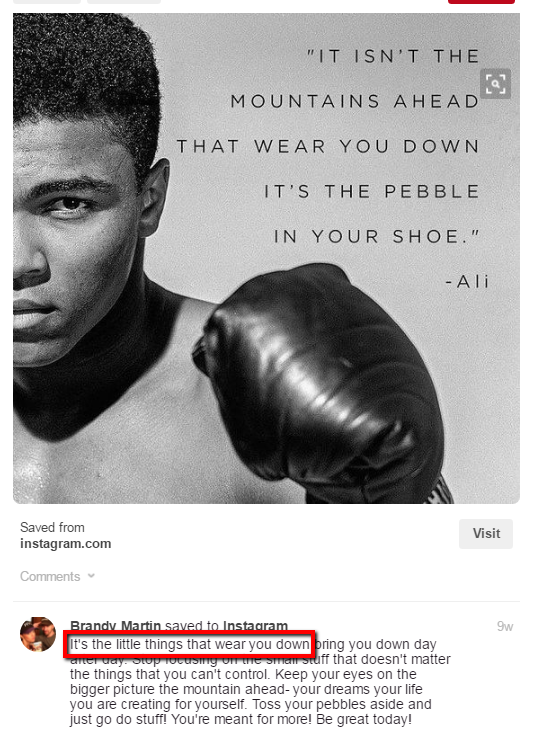 1It's probably worth noting that Muhammad Ali did not actually coin the original line; it has been around for at least a hundred years, although the original irritant in the shoe was a grain of sand. See Quote Investigator for more on the quote's origins.

This has a somewhat overlapping meaning:

He who has a why to live can bear almost any how.

I've seen it rendered in more everyday language like this:

Give a man a why, and he can bear almost any how.

Interpretations of this above have focussed on "small" versus "big", eg that "It's the little things that get you down".

It could alternatively be read as "future" vs "present", ie "Don't worry about the future, deal with the things around you in the present". The mountains are ahead, ie in the future, and have no immediate effect on us. However, the pebble does effect us. It could be a call to action to remove the pebble.

Not the answer you're looking for? Browse other questions tagged expressions idioms phrase-requests or ask your own question.

0
Common expression for “frame conditions” for a working concept/process
4
Are there figurative or idiomatic English expressions to mean hindering a person in achieving work / attempt?
4
What's a less profane alternative to “as f**k”?
1
An idiom for “seen clearly” or “plainly”
7
Word meaning “open to being persuaded by a strong argument”?
4
English equivalent of Polish saying “The truth is like an ass, each person has its own”
0
Equivalent expressions for 'I will reply in the near future' or 'before too long'
38
What is the equivalent of Persian idiom “When the reed blooms”?
4
The pain of the chopping board