We changed our privacy policy. Read more.
This site is currently in read-only mode; we'll return with full functionality soon. Follow @StackStatus or visit our status blog for more info.

There are two places you're most likely to find intersections: in math class(Discrete Math Concept) and in traffic. In math, an intersection is the spot where two lines cross. Those lines share this common point. The center of the letter X is an intersection. The same is true for streets.

What are the near antonyms of intersection for a math and traffic concepts?

I think the antonym will describe something "out of intersection" or those not intersect with the referenced "thing".

Is there a word suitable as an antonym to intersection ?

The closest word I found was "disjoint", "disjointed".

"Antonyms are only significant when it is a binary word. Antonym is a binary concept. And two non-intersecting lines are parallel only in Euclidean plane geometry; not in solid geometry, and not in non-Euclidean geometry. There is no simple antonym without an equally simple context, which must be presupposed."

Yes, it seems even something dummy(to not say stupid) try to get a word(or words) with the opposite meaning of a non-binary word, who would want to set a non-apple?

The objective of my question is to find some word to clear (self explanatory) give a name for a program method to get an object that doesn't intersect this thing.

This is not a single word, but in mathematics, conceptually you are after the symmetric difference:

In mathematics, the symmetric difference, also known as the disjunctive union, of two sets is the set of elements which are in either of the sets and not in their intersection.
Wikipedia 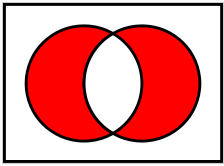 For traffic or roads, I thought about roundabout, which is a way to get to a cross street without a direct intersection, or a track, which is a closed circuit used for racing, thus theoretically lacks an intersection.

This site is temporarily in read only mode and not accepting new answers.

Not the answer you're looking for? Browse other questions tagged single-word-requests antonyms .

3
Is there a word to describe something that's perceived to be funny or clever only because it makes a reference that appeals to a certain group?
15
Does English have half-graded antonyms?
1
Antonym of all: none, not all, both?
32
What is the antonym of 'virtual machine'?
28
An antonym for "shortcut"
0
Word to describe something which exists both in the mortal world and the afterlife?
5
What is the word for the corner where ceiling and wall meet in a house?
3
Are there any pairs of English words that are cognate to each other yet have opposite meanings?
1
Antonym of operational in the sense of larger scope, and non-recurrence but not military