What are the origins and proper uses of “s***gibbon”?

This derogatory term recently exploded on the U.S. scene with its application to U.S. presidential candidate Donald Trump. Its arrival is so recent the Urban Dictionary has only a recent definition and one that seems to me not to connote the true depths of the intended insult:

Google Books Ngram Viewer gives zero hits. Perhaps some folks from Scotland and the rest of the U.K. could fill us in? It is such an inspired term that it seems to beg for a rich and diverse history and usage.

My Scottish perspective on Shitgibbon

There are a couple of threads to this particular insult.
In Scotland, and I am sure in other places, we love a good, complex, overblown insult. A proper insult should be entertaining for listeners as well as offensive to the target. This is apparently the tail end of the noble Scottish tradition of Flyting, which was similar in form and function to modern Rap Battles.
While this example can be seen as one-sided in that Trump is merely the object of the insult rather than a participant in an exchange, he is seen as a fair target due to:

The other thread is the insult itself. ‘Shitgibbon’ references the storied practice of chimps of throwing their faeces around. The phrase is deployed in allusion to the perceived quality of Trump’s debating skills and political grace, though the reality of the ape-practice apparently undermines the image by being a sign of intelligence - opinions differ on whether Trump is a smart guy playing dumb or not. This blog perfectly captures the idea, while sadly being unaware of the term. https://musteryou.wordpress.com/2010/09/14/just-the-usual-apes-throwing-shit/

UPDATE: Well it turns out that the guy who wrote the tweet is not Scottish and perhaps had little of that in mind when he wrote it. I'm leaving it here though, because I think it still represents how it was understood by the Scottish-Indy-minded section of Twitter, of which I am a habitue, where it was widely circulated prior to going viral/global. I suspect that the retweet that set things off may have been someone like Wings Over Scotland

"Shitgibbon" appears to be an insult recently invented and posted in a twitter message:

The reference to a common insult "shit" and a "monkey" probably creates the desired effect. (The idea is that the person to which the insult is directed is supposed to look like a gibbon probably for the color of the hair) 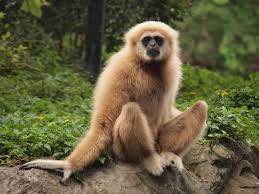 Searching Usenet, I found several examples from 2000 and 2001 from the British bootlegging scene, where people would record the audio (and sometimes video) of a gig, and then arrange trades of tapes with other bootleggers and fans.

A shitgibbon was someone who trades copies and doesn't appreciate the effort it takes to record a concert. Two of these three examples are from the same person (and possibly the third too).

It's clear that some of you expect others to do the hard work for you (ie filming)then belly-ache nauseatingly when you're asked to cough-up for it! .As for taping,I totally endorse taping trees and suchlike but franky audio-ing is a piece of piss compared to filming and 99% of filmers will only trade with other filmers.Why should lazy so-and-sos like you get copies of our tapes for free? But if you really baulk at buying videos,I'll tell you what,I will film the London show but because I don't want to be accused of bering mercenary,i'll keep the tape to myself-no sales,no trades.Good luck and goodbye to the most sick-making,hypocritical bunch of shitgibbons i've yet encountered on the Web!

get the f*ck off this newsgroup,shitgibbon!!

>But his prices are a bit high.

So they should be,when he's the feller "what" films them.If you want cheap then feel free to buy from any one of 10,000 shitgibbons out there "who film from their computer keyboards" (as it were) thereby saving so much $$,that they can cut you a GREAT deal for a 4th gen mastepiece!

The word in question is a "portmanteau".

2: a word or morpheme whose form and meaning are derived from a blending of two or more distinct forms (as smog from smoke and fog) - merriam-webster

(linguistics) A word which combines the meaning of two words (or, rarely, more than two words), formed by combining the words, usually, but not always, by adjoining the first part of one word and the last part of the other, the adjoining parts often having a common vowel.

In recent years, it's been quite common usage in the North of England and Scotland to create bespoke portmanteau 'swears', especially where Mr Trump is concerned.

Invented insults have a reasonable history in English, but we currently seem to be on an uptick. "Shitgibbon" is one such; you may also have seen "cockwomble" recently.

They're interesting in that they don't particularly relate to any characteristic of the person. Similar insults such as "fuckwit" or "dickhead" are clearly insulting the person's intelligence, or "cuntface" insulting their looks. If you just want good unbridled vulgarity though, there's no need to base your insults on anything!

Coined by @metalollie on Twitter, this gentleman is avowedly English, not Scottish. Scotland voted to stay & plan on a second referendum, you tiny fingered, Cheeto-faced, ferret wearing shitgibbon. https://t.co/iKyEIxf8ej (https://twitter.com/MetalOllie/status/746296745081061376?s=03)

Not the answer you're looking for? Browse other questions tagged etymology word-usage pejorative-language or ask your own question.