I'm currently working on translation of George Meredith's Diana of the Crossways (published in 1885). Here's one passage that I find especially challenging. I would be very grateful if someone could explain me the meaning of the expression "give them just the start over the frozen minute for conversation", most importantly "frozen minute" (I might be able to understand the rest of the expression if I understand these two words). Does the word frozen refer to some awkwardness two strangers might be experiencing?

At a Ball in Dublin, two men want to dance with Diana; both are unsuccessful, and she is led out by Mr. Redworth, an acquaintance of her friend Emma (who actually arranges it). One of the disapponted gentlemen tells Emma:

"'Favour can't help coming by rotation, except in very extraordinary circumstances, and he was ahead of me with you, and takes my due, and 'twould be hard on me if I weren't thoroughly indemnified.' Mr. Sullivan Smith bowed. 'You gave them just the start over the frozen minute for conversation; they were total strangers, and he doesn't appear a bad sort of fellow for a temporary mate, though he's not perfectly sure of his legs."

Thank you in advance!

You seem to have come upon some 19th century slang that hasn't survived. There are a few instances of the phrase that I was able to find and it's used in a variety of ways, not just one set meaning: 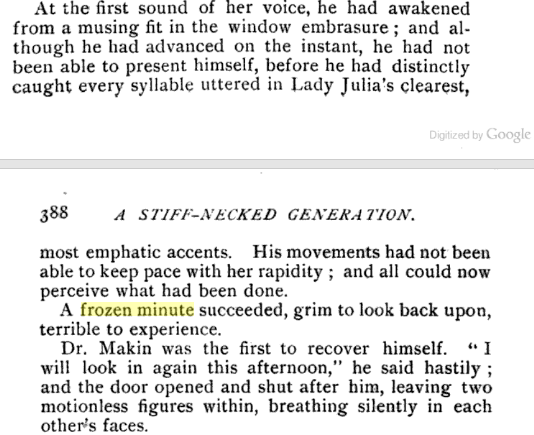 Seed of the Sun By Wallace Irwin 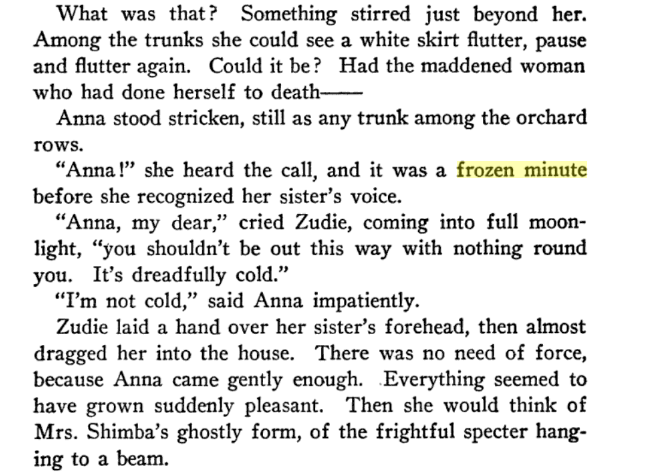 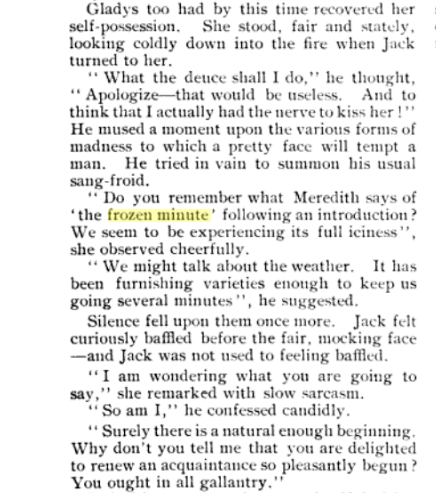 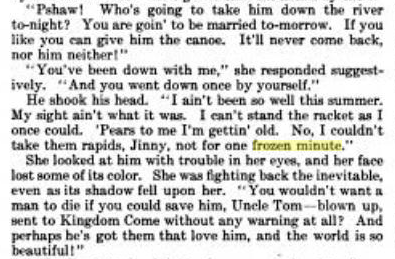 Most generally it seems to describe the feeling you get when time stands still because of nervousness or fear during an unsettling situation.

When time stands still, everything around you seems to stop:

I saw the car coming straight towards me, and for a moment time stood still.

In one of the other sources above, "frozen minute" seems to also describe the awkwardness of conversations where you don't know what to say, and it seems to last forever.

In the second to last source, "frozen minute" describes the time of suprise or petrification after a crash, allowing the criminals to capitalize on the victims' vulnerability.

In the last source, "frozen minute" is used in a completely different sense, to explain that just a minute on the dangerous rapids would be intolerable, because it would feel a lot longer due to the coldness of the water.

However, in the source in your description, "frozen minute" is used in the sense of "awkward conversation" that's found in the third source above: "...the frozen minute following an introduction? We seem to be experiencing its full iciness."

“frozen minute” here to my mind means the minute when the two just individuals just froze, as if they were 2 ice-blocks-the time when they stood shocked, bewildered, hammered. People take years to come to truly accept that their beloved person is no more. There is a Hindi poem which means in English " I really do not know why that crucial moment of my life did not move ahead, why did it just stand (dumbfounded) all night." ( Poet Gulzar)

3
Is the word "minute" drifting?
2
What does this mean: "I'll be with you in a minute"?
0
at the proverbial last minute
2
What does 'accent of', 'thousand minute particulars' and more in this paragraph?
1
by-and-by: meaning in context