Why is the unit of measure placed before the value for currencies? Are there other measures where the unit precedes value?

$1,000 is pronounced as "one thousand dollars". Reading from left to right, it seems like it would make more sense to write the value as: 1,000$. This way the pronunciation of the value follows the way it's written. Every other numerical value I can think of places the unit after the value:

I'm not sure if this question fits in with the rest of the questions on this site. But I'd like to know why currencies are so different from other quantities. Not to mention the need to separate groups of three digits with commas.

I think that the reason comes from paper days. Normally you would write

in the ledger, because it makes it harder to modify the entry.

The same reason justifies the thousand separator (as it splits the groups of digits in three so even changes from $1,252,001.- to $1,2152,001.- are easily detectable), but here readability also plays an important role.

Not every currency or culture places their currency sign before their amount. However, most do. From Wikipedia:

When writing currency amounts the location of the sign varies by currency. Many currencies, especially in Latin America and the English-speaking world, place it before the amount (e.g., R$50.00); many others place it after the amount (e.g., 50.00 S₣); and the Cape Verdean escudo, like the former Portuguese escudo and French franc, placed its sign in the decimal position (i.e., 20$00).

I found a discussion on this exact topic; I'm not saying any of it constitutes good research, cause there aren't a lot of good answers and no references, but the answers that make the most sense come from the general reasoning of "the currency symbol, placed first, lets you know that the number is a currency amount, which would be spoken differently than an ordinary number, even a measurement". This does make sense on certain levels; given the amount 2.53$, you might sightread it and say "two point five three dol - oops, two dollars fifty-three cents". By contrast, you could say "two point five three" followed by pretty much any other unit of measure; "two point five three kilometers".

Many currencies, particularly ones subsumed by the Euro, placed the currency sign in place of a decimal point. 20F35 is "vingt francs trente-cinq centimes"; the amount can be sightread left-to-right and sound natural. A few currencies still do this. The Yuan, Yen, and Euro signs have been seen preceeding OR following the amount, depending on who's writing it. For the Yen, it makes a lot of sense, as 1Y is equivalent in culture (but not necessarily monetary exchange rates) to one U.S. cent; there are no "half-yen" coins much like there are no half-penny pieces in U.S. currency (there used to be one in English currency), so you never have to deal with a decimal point unless using a thousand/million/billion/trillion abbreviation (where "two point five million yen" is still perfectly fine).

Note that this answer contains a fair amount of conjecture.

I think that the custom to have the currency sign precede the amount may have something to do with the pre-decimal monetary system in the UK. Before 1971, prices were expressed in pounds, shillings, and pence - or the £sd system. (the d stands for denarius, a small Roman coin). There were 20 shillings in a pound, and 12 pence in a shilling.

The Academic Writing in English wiki of the University of Hull notes that: "When actual sums of money were being written, by the twentieth century it was usual to write the three units separated only by slashes (called solidus by old printers for this reason) after the £ sign: £20/10/6 meant 'twenty pounds, ten shillings and six pence';"

I would postulate that in this system having the £ sign precede the values was the most intuitive method of notation. At least to me, the alternative of 20£/10/6 is far less appealing and even confusing to look at. Placing the £ at the end would not make sense as it would imply that the £ referred to the number of pence. Placement of the £ sign before the numbers clearly signalled that the following three numbers referred to monetary values.

Of course the $ sign was already in use by the end of the 18th century and I'm unsure how monetary amounts were written down at that time in the UK. However, it suspect it must have been similar to the above-mentioned notation as it had already become customary to have the £ sign precede the monetary value in 18th century England. In fact, Florian Cajori, in his book A History of Mathematical Notations (page 26), writes that: "It is interesting to observe that Spanish-Americans placed the ps after the numerals, thus 65ps, while the English colonists, being accustomed to write £ before the number of pounds, usually wrote the $ to the left of the numerals, thus $65." (The use of ps here refers to pesos; and the imposition of the "s" over the "p" is believed to have led to the creation of the $ sign.) 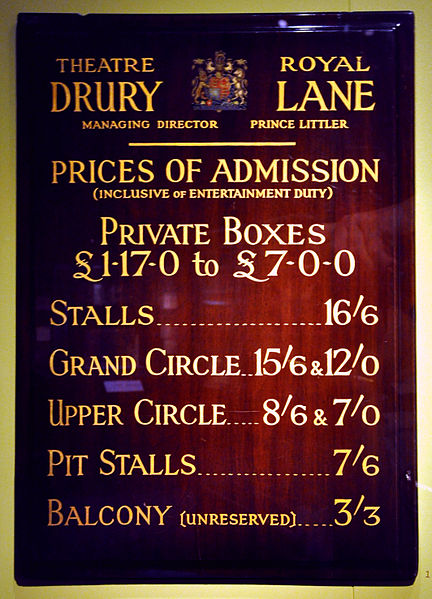 Notice board displaying the entry prices for the Theatre Royal, Drury Lane, London, around 1946 (source: Wikipedia).

Several rules that apply to other things in the English language don't apply to money, probably because, historically, people who have dealt in financial matters as their way of life have developed their own way of talking about the target of their vocation -- i.e. it's jargon which has become part of the main idiom.

I think it is because, unlike words that are formed from left to right, numbers actually build up from right to left. Then it is only natural that the symbol appear and the logical end of the figure formed by building up the digits right to left.

9
Usage of "and" and comma when writing numbers UK style
5
When Things Used To be "Worth 'X' Millions"
0
Formatting numbers in a book about mathematics
1
Why are decimals read as fractions by some cultures?
1
Correct way of linking arabic numerals and their written-out variants (in official documents)*
1
Term for a “unit-ed” (versus “unitless”) quantity
0
What is the word to describe a variable whose value does not relate to any absolute unit of measure?