I'm trying to find a word like 'predatory' that refers to prey instead.

Looking through some physical books gave some information about the root word 'praedor', for which I found this Wikitionary page. A quick search on Merriam-Webster only returned some near-antonyms for 'predatory':

None of these words really capture what I'm after. I'm trying to catch more of the behavioural side of prey, but I want to use this word almost like a quality for a human.

Example sentences of how I would like this word used;

That is preyed upon; subject to predation; exploited or persecuted. 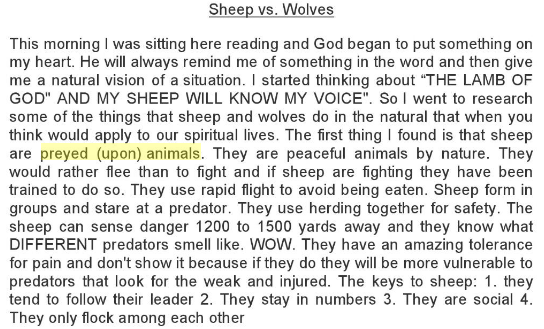 Dillie the Deer: A True Story of Love, Healing, and Family

Theories of Human Learning: What the Professor Said

Made for Life (PLE: Emotion): Coping, Competence and Cognition

The Ancient Origins of Consciousness: How the Brain Created Experience

Extinct Madagascar: Picturing the Island's Past 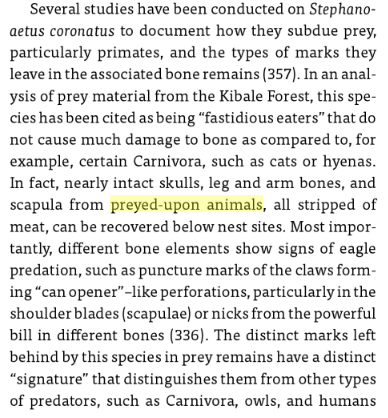 A Season of Fire and Ice

Sword of the Highlands

The Illustrated Library of the Natural Sciences, Volume 3 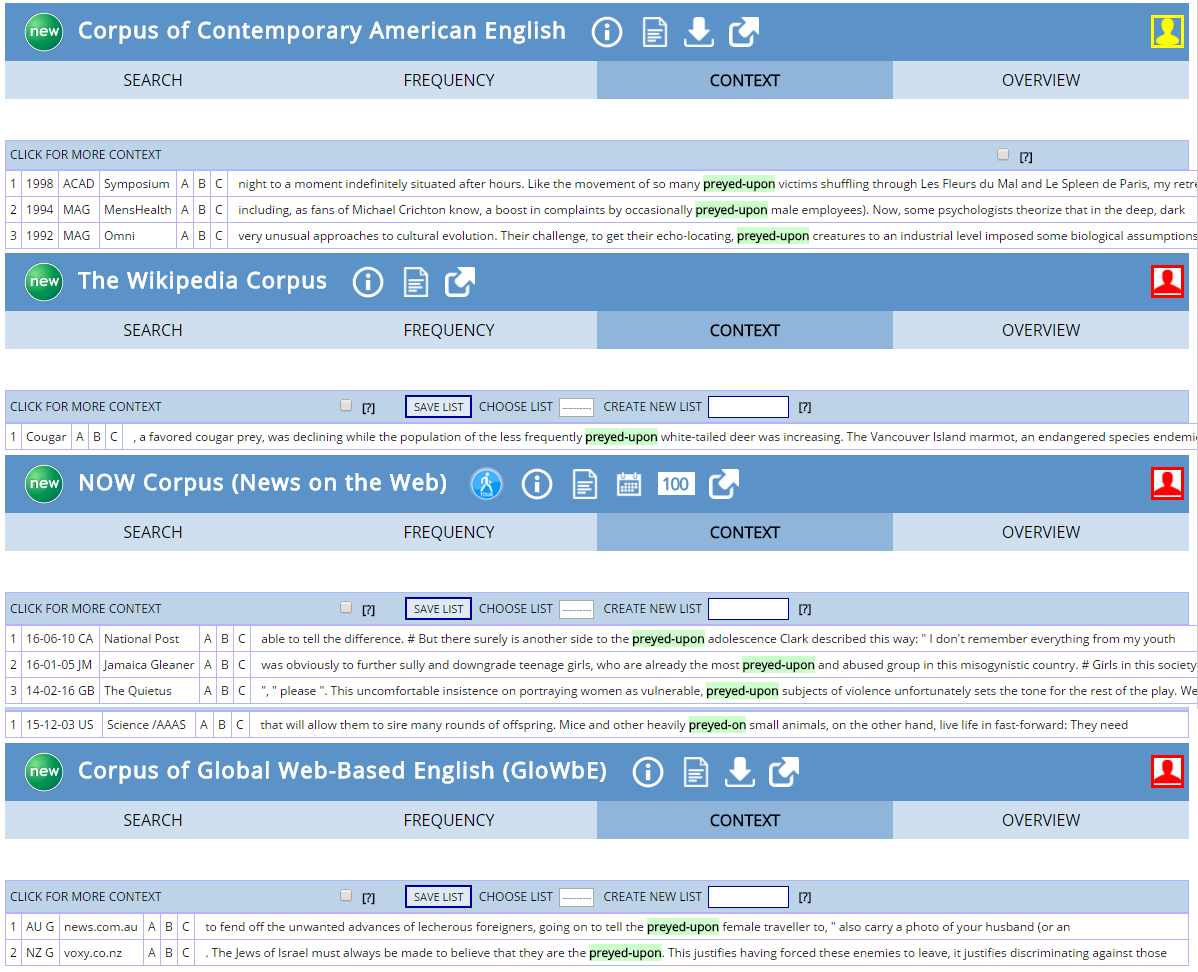 Predator is to predatory as prey is to preyed upon. This is a passive, "receiving" construction. Rabbits have a nature to be preyed upon.

In the case of a person, Jack was noted for his tendency to be bullied. That's another "receiving" construction in the passive voice.

Therefore English antonym to predatory should be predaticious/predatitious (Latin meaning “taken as booty or plunder” per Lewis & Short).

Suffix -itious/-icious means “having the nature of”. From this, we can confirm the meaning of predaticious/predatitious as “having the character of the predated (preyed upon)”.

However, the only two authors to ever use this word in English (bishop John Gauden and gardener John Evelyn) have used it incorrectly as a synonym (rather than antonym) of the word predatory. You have an opportunity to fix their historical mistake.

There is also an English word predacious/predaceous. Again, it is used as a synonym (rather than antonym) of the word predatory. Again, the correctness of this usage can be questioned: Latin word prædātiōsus/prædāciōsus is not attested. If it existed, it would mean something to the effect of “plundersome” – hard to say whether a synonym or antonym. Whereas Latin word prædātius/prædācius means “more predated” (comparative degree of praedātus).

For a more common word, I would settle for submissive or gullible. How about furtive? A prey aware of being a target may behave furtively. Furtive behaviour defines a prey.

Not predaticious to any, but propitious to all true Saints.

It is not good to water new-ſown Seeds immediately, (...) be ſure to purge them of predaticious Weeds betimes. 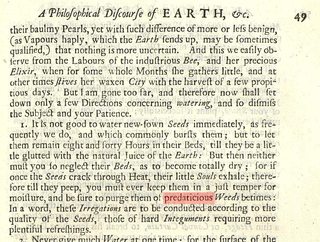 Provided no rank Weeds, or predatitious Plants (conſummating their Seeds) be ſuffered to grow and exhauſt it.

But the ſhade of the Aſh is not to be endur’d, becauſe it produces a noxious Inſect; and for diſplaying themſelves ſo very late, and falling very early, not to be planted for Umbrage or Ornament; eſpecially near the Garden, ſince (beſides their predatitious Roots) the deciduous leaves dropping with ſo long a Stalk, are drawn by cluſters into the Worm holes, which foul the Allies with their falling Keys, and ſuddenly infect the ground.

with corresponding passage in John Mortimer’s anthology “The Whole Art of Husbandry” (1721):

But the ſhade of the Aſh is not to be endured, becauſe it produces a noxious Inſect; and becauſe of the late Budding, and early falling of the Leaves, and therefore ’tis not to be planted for Walks or Ornaments, eſpecially near Gardens, because of their ſpreading Roots and falling Leaves, both which are prejudicial to them.

This change clearly shows the intended meaning of “predatitious” as “predatory” (expansive, “spreading”) and possibly acknowledges it as an error.

And yet I remember Columella (...) is not for a total extermination even of those laizy & predatitious Bees, (...) least the labourious Bees should grow idle. 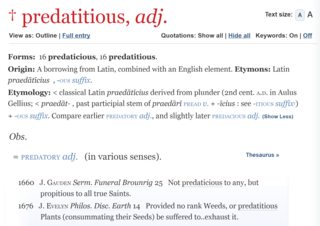 Therefore this inscription which you see: ‘From the spoils,’ does not demonstrate the things and the matter of the prey (loot) itself. For none of these were taken from the enemy by Trajan. It only declares that they were made and bought ‘from the spoils,’ i.e. from predaticious money.

If you're looking for an alternative to "preyed-upon," the verb depredate can mean the same. Depredated in the noun form could express the meaning of something that is preyed-upon. Another more technical term in regards to predator-prey relationships is consumed, in case that's helpful.

There is no parallel word to predatory for prey because prey doesn't do anything specific to become prey. It doesn't require any special skills or predisposition. By contrast, the word "predatory" is specific: it refers to the ruthless, single-minded focus of the predator on the object of its hunt.

Falling prey is the result of a failure on any one of a number of fronts, or possibly several fronts at once. These are all connected to different attributes.

Some prey might be described as passive or unaware. It has the wherewithal to get away but is taken by surprise.

Prey which is active and aware of the danger might nevertheless become prey because it is scared, and paralyzed by fear. Or else it fails to escape because it is weak, slow or fumbling. Or simply due to poor intelligence (stupid) or information (ignorant). For instance, the prey knows how to swim, but doesn't realize that the predator fears the water, and doesn't take advantage of a nearby body of water to get away.

No one issue stands out which causes a creature to become prey, only that it is inferior in some way to its predator in size, strength and speed, or else has some flaw which causes it to lose.

We could invent an adjective which is a combination of all of these, but it would lack expressive power by encompassing too many unrelated attributes. Words are useful insofar as they have the precision to discern subtleties in meaning.

Being predatory doesn't preclude being preyed-upon since smaller predators are attacked and devoured by larger predators. Prey is not necessarily a shy, meek, herbivorous animal, so an adjective which implies these qualities misses the mark.

The word predal, "of or pertaining to plunder/prey", is now obsolete (so says the Oxford English Dictionary), but it has been used, so it could work in a literary context. Latin praeda means "plunder" but also "prey", which is why words like predator have been derived from it. So predal or praedal can mean "predatory", for predators pertain to prey, but also "having to do with prey", for that is what the suffix -al(is) normally means in English (Latin).

predatory is an active stance, prey is an inactive stance, bait would be one of the few instances you would actively seek to be prey, but bait is the victim of one predator, to make prey of another predator. So again you seem to want to find a word to describe someone who actively seeks to become prey. That does not happen that I am aware of except as a secondary effect of other actions intentional or otherwise, such as complacency, over aggression, etc.

I'm trying to catch more of the behavioural side of prey, but I want to use this word almost like a quality for a human.

Example sentences of how I would like this word used;

I can't think of a word that perfectly matches your analogy, and taking the other answers into account I begin to think that it does not exist. But I can think of a word I would use in those sentences if I had to write them in my mother tongue (German).

Maybe the suggested translations contain a word you find fitting. To me 'meek' and 'docil' both seem to fit.

Predated, as the past participle of predate (ODO), might work:

[with object] (Of an animal) act as a predator of; catch and eat (prey).

In the passive, then, "The chicks were predated by eagles." Of course, this usage is much rarer than predate meaning to pre-date.

1
adjective for “wanting/in the mood to watch a movie”

24
Translation of a German word: “Gutmensch”
12
What's a word for someone who wants to voice opinions but not have them challenged?
24
A word for when somebody deflects from a conversation?
0
Extreme antonym for “standoffish”?
1
Word for whether something is local or remote
1
What does a predator feel when spotting its prey?
4
Adverb Meaning so as not to damage something delicate or fragile
0
What is the word for a person who twists your words around into something negative…?
1
Are there good words for “non-religious” that are broader than “secular”?