Was analysis spelt as anlysis in the past?

I found a lot of uses of the term anlysis, mostly in older texts and archived articles (from the 1970s). Was the word spelt as anlysis before the current use of analysis?

Update: It seems like people think these are mostly spelling errors, so here are a couple of queries that yield results that use anlysis instead of analysis - some of the 120000 google results are obviously misspellings, some are intended abbreviation in the context, but some seem like the word was used intentionally. The 33 archive.org results also seem to be a mixed bag, but some of the results are from fairly recent works.

google search for anlysis not analysis

books and papers on archive.org that have anlysis in them

Update 2: Based on all the errors, seems most likely that the ones that are not misspellings are early OCR errors. Thanks, all!

There are certainly occurrences of "anlysis" much earlier than the 1970s, but these look to me like either typos or a degree of illiteracy. For example, this 1914 agriculture bulletin:

The selection of samples for chemical anlysis is more important in obtaining true results than is the chemical anlysis itself. Portions of the Feed to be analyzed should be taken from as many sacks as convenient and thoroughly mixed and ...

Note that in the above extract, "analyzed" retains the correct spelling.

Further evidence to suggest that the spelling is an error or aberration can be found using Google Ngrams, which shows that this "anlysis" spelling has never represented more than about one ten-thousandth of the usage:

The etymology of the word doesn't seem to have a "missing-a" branch. ODO gives this origin of the word:

1580s, "resolution of anything complex into simple elements" (opposite of synthesis), from Medieval Latin analysis (15c.), from Greek analysis "a breaking up, a loosening, releasing," noun of action from analyein "unloose, release, set free; to loose a ship from its moorings," in Aristotle, "to analyze," from ana "up, throughout" (see ana-) + lysis "a loosening," from lyein "to unfasten" (see lose). Psychological sense is from 1890. Phrase in the final (or last) analysis (1844), translates French en dernière analyse.

It should also be noted that if you're reading an electronic version of any document from the 1970s or earlier, there's a risk that the OCR software that turned it from a printed image into text may have misread the word, and it hasn't been corrected.

anlysis does not appear in the Oxford English Dictionary, at all.

Sometimes a given word won't appear as an entry (head word), but will appear in a phrase, definition, etymology, quotation, or 'full text', but as you can see, anlysis appears in zero of these:

I go with my gut feeling and say that it is a "spellng" error.

Many (if not all) of your Google results are, as the other answers say, errors of some sort.  You can get results from Google for all sorts of non-words, including “boilogy,” “chemcal,” “millenium,” and “spellng” including this one:

which, as far as I can tell, is an honest mistake, and not a joke.  To be fair, some of those search results (particularly those for “chemcal”) are names, and some of them may be non-English words.

Several of the results from the “archive.org” search appear to be transcription and/or OCR errors.  The first one on the list, Spectral Anlysis on Explosive Percolation, links to a full text document: 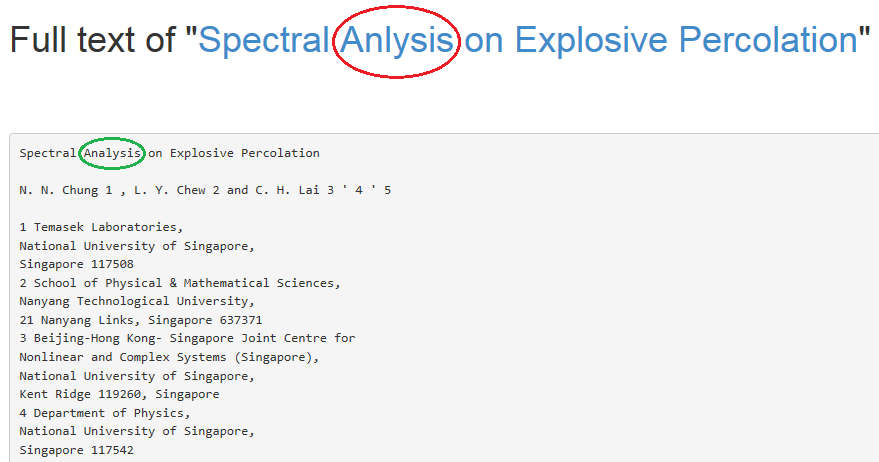 in which we can see that “Analysis” is spelled correctly in the text; “Anlysis” appears only in the title under which archive.org indexed it.  (Although we might wonder whether the fact that the authors are from Singapore played a role.)  An even more egregious example is An analysis anlysis of the factors affecting centralized versus decentralized management of supply items, in which the correct spelling is immediately followed by the incorrect one.  Again, the full text contains the correct spelling, “An Analysis of the Factors …”.  We can also see the garbletext “CFNTRAI.IZED”, which is a classic OCR error.

Not the answer you're looking for? Browse other questions tagged orthography or ask your own question.

7
Why are the past and present tenses of "read" spelt the same?
16
Descriptivism and widespread misspelling
1
Terms for game mode depending on number of players
5
Notepad++ insists "dependancy" is the correct spelling, while Google Chrome insists it's "dependency". Who's right?
9
What is the history of the spelling "imflammable" (with M instead of N)?
17
Why was 'Jesus' spelt 'Jhesus' in Wycliffe's Bible?