Is there any equivalent for this Persian expression "____ is like an unopened watermelon"?

The Persian expression/ simile "____ is like an unopened (=uncut) watermelon" implies that you never know what the given (risky) issue/ choice will turn out to be until you proceed to experience or try it.

We use it specially for speaking about cases in which we have made a (risky) choice, picked up someone or something but we are not still sure if it has been a right choice; or just for speaking generally about making such choices with unknown consequences.

Is there any idiom, expression or even a simile as the equivalent for this Persian expression in English (i.e. you won't know what will happen until you (proceed to) experience or try the given (risky) issue or choice)?

Unfortunately I couldn't find anything in my searches. 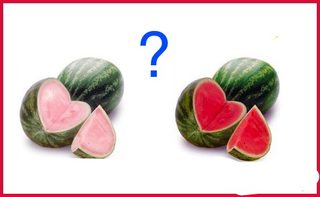 A crapshoot is a way of saying that a particular chance being taken will have an arbitrary result, and is slightly opinionated in that it suggests a "good" result is (somewhat) less likely, or at least is chancy (like anything random). Marriage is a crapshoot. You have to roll the dice. Note that the reference 'crapshoot' is to 'shooting craps', a dice game. (Thanks to @Sabre for underscoring this.)

The proof is in the pudding is an opinionated way of suggesting that only by sampling a thing will you know if it is good. (The expressed opinion is that it is, indeed, quality.) Is this the right marriage for me? The proof will be in the pudding. The older, more long-form way of saying this is 'The proof of the pudding is in the eating.', but you will often hear it shortened. (Thanks to Paul du Bois for pointing this out.)

Anyone's guess is a more neutral way of saying the result of a choice is uncertain. Whether the marriage will work out is anyone's guess.

"Life is like a box of chocolates. You never know what you're gonna get."

A rather old-fashioned way of expressing this with a strong negative connotation is that the subject is a pig in a poke. A "poke" here means a sack, and if you bought a pig in a sack, the merchant could really have sold you something worthless - you don't know, because it's hidden inside the sack.

If, instead of a valuable pig/happy marriage, you instead received a worthless kitten/marriage full of strife and in-laws, then cat is out of the bag. (Whether this is the true etymology of this phrase is disputed, but it's a nice symmetry if it is. Snopes suggests that is unlikely the case as mistaking a cat for a pig would itself be unlikely. It's worth noting though that many other languages have the phrase "to buy a cat in a sack" with the same meaning as the English pig-phrase.)

I don't suggest you see this about anyone's marriage with their fianc(é)e in earshot, unless you know their sense of humour!

You can’t judge a book by its cover.

This seems to be roughly parallel to your watermelon maxim, lacking implication of imminent action, use, or experience. (Cf. thefreedictionary.com.)

An expression often used to suggest that you cannot know what the future may being is "you never can tell":

You pays yer money and you takes yer choice. Reference, a column in the New York Times by William Safire. The first use in print, according to Safire, is an 1846 Punch cartoon, in which the phrase meant simply: take your pick. But Safire notes the meaning has changed:

''The phrase is used today,'' writes Edward C. Stephens, dean of Syracuse University's Newhouse School of Public Communications, ''not so much as an invitation to choice as it is a rejoinder to complaint. It seems to be similar in intent to 'You made your bed, now lie in it.'

Your situation is like Schrödinger's Cat, you don't know whether it is alive or dead until you open the box. Marriage and Brexit are both good examples of the Cat, we won't know for sure until more observation and experience has taken place.

The saying comes from a physics thought experiment by Erwin Schrödinger, intended to help explain a possible interpretation of quantum mechanics. (I won't go into any details here, you can read it in the link, but suffice it to say you should never let a quantum physicist take care of your cat while you go on vacation.) The poor cat is in a box with some contraption that will kill it if certain conditions are fulfilled. Only when the box is opened and someone observes and experiences the condition of the cat, is the Universe forced to choose whether or not those conditions exist. Until then, the cat is both alive and dead inside the box.

As a caveat, not all English speakers will necessarily understand. The idea is well-known amongst people with at least a passing interest in science. However, I am not sure whether it is gaining acceptance in the general populace. The internet may be helping with that.

"Unopened letter" For example, "love's like a promise in an unopened letter---where nights full of pleasure seldom see the light of day....when life gets in the way" [quote from the 1991 Kathy Mattea recording of "Time Passes By," written by Jon Vezner and Susan Longacre]. In this specific example I guess the watermelon has been cut as it were, but its promise never fully appreciated, i.e., known.

Another option is the expression "it's a lucky dip", which is a reference to a game where players pull packages from a large box or container with no idea what's in each package. You might get something really good, or not.

The saying "The proof of the pudding is in the eating" seems to fit best though as it's about quality. A pudding might look and smell really nice, but until you eat it, you don't really know if it's any good.

Big unknown is used colloquially in the US.

Merriam Webster defines it as

"The important thing that everyone would like to know <The big unknown is how investors will react.>

You never know till you try.

You never know (what you can do) till you try.

"You won't know what will happen until you (proceed to) experience or try the given issue or choice."

The Australians have "suck it and see."

Is it a sweet orange or a sour lemon? Suck it and see. You won't know for sure until you try.

As an oft-married man, I am inclined to say "a can of worms", using the original intent; however "a Pandora's box" might be more charitable, given that HOPE was the last to come out.

Another related idiom that is used in certain circumstances (and there are many possible variations on it) is behind the (closed) door. For example:

The prospect of marriage is a closed door, and you won't know what's behind it until you open it.

Brexit voters chose to see what was behind door number 2.

This is usually used as a reference to game shows where a contestant is presented with two or more doors with possible prizes or bogus prizes behind each (most notably the 1960's game show, "Let's Make a Deal"). The second example is a pretty clear example of this metaphor; the contestant (Brexit voters) know what's behind one door (staying in the EU) but decided to take a chance, giving up their current prize for the potential of receiving an even greater prize, but at the risk of suffering a significant loss.

At other times it might be a reference to the Frank Richard Stockton short story "The Lady, or the Tiger?" (or similar works) wherein an accused criminal must open one of two doors to decide his fate, a lovely young lady to be his bride, or being killed by a ravenous tiger. You may see the phrase a lady or a tiger used as an idiom by itself, usually somewhat poetically:

Standing at the altar, he suddenly realized he wasn't sure if he was about to marry a lady or a tiger.

The long-term consequences of the Brexit vote have not yet been revealed—we don't know whether there is a lady or a tiger behind that door.

I more violent idiom, but still commonly used is to refer to something as a "mine field". As in, you don't know if the ground will blow up until you step on it.

This emphasizes not just that something is unknown, but that a risk is being taken by finding out.

I don't think I like this Brexit idea, feels like a bit of a mine field to me.

Such an unopened item can be called a Pandora's box.

It's a container that contains both good and evil things (but with the evil closer to the "exits.")

A not so common expression that I like is:

Referring to those little bags of candy you get from corner stores. They contain a random assortment of sweets, so you don't know if it will contain the good ones, or the ones you hate.

I don't think this expression is common, but I think it should be :)