What does “a slightly overblown cartoon figure” mean?

“Harry! Good-o!” said Bagman happily, looking around at him. “Come in, come in, make yourself at home!”

Bagman looked somehow like a slightly overblown cartoon figure, standing amid all the pale-faced champions. He was wearing his old Wasp robes again.

According to a dictionary at hand, ‘overblown’ means ‘exaggerated’. I’m thinking ‘overblown’ in the above quotation is used to contrast against ‘pale-faced’ champions. However, I can’t get what is exaggerated for sure; The color of robes? His happy face? Therefore, I can’t imagine such cartoon figure at all.

What does “a slightly overblown cartoon figure” mean? What kind of picture would you get from it?

overblown also has the meaning

of unusually large size or proportions: a majestic, overblown figure.

By itself, an "overblown cartoon figure" to me would be someone huge in size, typically like Obelix

In the context of Ludo Bagman being a former Quidditch player with a broken nose, I would say you are right in contrasting this against the other "pale-faced" champions.

.. whose good looks have gone a bit to seed; his nose is squashed in (apparently having been broken by a stray bludger) and he is quite a bit thicker around the middle than he was in his Quidditch days ..

So it all fits in with a bit absurd and comical looking image which is what the author is trying to conjure up.

I think it's his clothes, the "old Wasp robes". It's making him look ridiculous, and cartoonish, and so the author writes "a slightly overblown(exaggerated) cartoon figure".

A cartoon figure is always a caricature of the real thing; It's a humorous sketch or drawing depicting something. 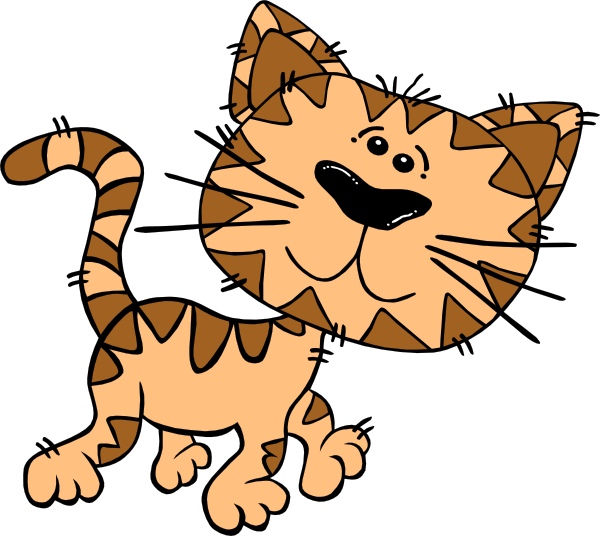 This cartoon of a cat doesn't look like a real cat, it's humorous, out of proportion, slightly ridiculous, but we know it's a cat.

In the context of Harry, Bagman's clothes is making him look like a "slightly exaggerated cartoon figure".

It is Bagman's whole personality that is overblown, larger than life, exaggerated to the point where it seems artificial. Even in the short extract you quote we see him speaking enthusiastically, in a style which Rowling's British readership will immediately identify as English Public Schoolboy. Bagman is written to fit better into the early twentieth century upper classes as portrayed by P.G. Wodehouse, or Harry Enfield's character Tim Nice-But-Dim, rather than the early twenty-first century that he is supposed to live in.

In other words, Bagman is being portrayed as someone who doesn't quite fit into the same reality as the rest of us. He acts like a caricature, a cartoon character, rather than a real person.

7
What does "ad-hoc" mean?
22
What does "canonical" mean?
0
What’s the meaning of ‘we will emerge’?
10
What does "ingenuous" mean?
3
Does a "blue mouth" mean something as a figure of speech?
2
What does the word "phink" in the pink panther cartoon mean?
0
Does inscrutable mean "hard to figure out"?
1
Is it possible to combine "super" and "slightly" to mean something smaller than slightly?