"Magna magna" is a typical Italian slang expression commonly used by people to give vent to their frustrations and disappointment with politicians when cases of corruption and personal interest in public affairs are brought to light.

Literally the meaning is "eat eat", where the verb "eat" in this case is synonymous with "steal". The common saying is "e' tutto un magna magna" that is "it is all just a magna magna".

I can't find a reference on this subject.

What are the equivalent BrE and AmE (possibly slang) expressions?

have/get one's nose/snout in the trough

'He's got his nose in the trough' could be applied to any person over-eagerly procuring money, but is almost always used for illegal or at least dodgy practices.

Oink oink might be closest in form in American English. This is the English word for the sound a pig makes, and can be used to mean "greedy" (similarly to the trough idiom, I think). "Oink out", for example, equates to "pig out", meaning overeat or binge (see, for example, The Free Dictionary), and I might say "oink oink" as a humorous admonition to my child if I saw him reaching for yet another donut.

Helpfully for this situation, in the US "oink" also evokes political "pork"1. "Pork barrel" is an idiom for a particular kind of political corruption:

This usage of "oink" is not as widespread as the Italian saying you describe, but I think would be pretty instantly understood in context. Some examples from around the web: 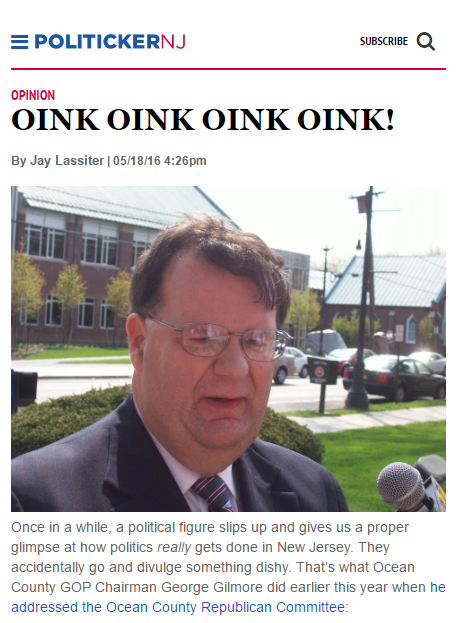 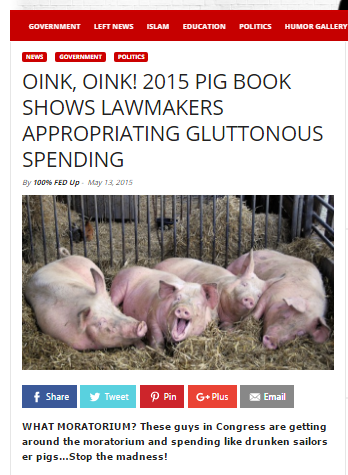 If, for example, the highest executives of the nation or of the state are called, not President X or Governor Y but pig X or pig Y, and if what they say in campaign speeches is rendered as "oink, oink," this offensive designation is used to deprive them of the aura of public servants or leaders who have only the common interest in mind. They are "redefined" as that which they really are in the minds of the radicals. (Political Humor: From Aristophanes to Sam Ervin By Charles E. Schutz, 1977)

1Note that "pig" is also a derogatory term for police, and "oink" can be used to reference police (especially those who abuse their powers), so be sure of your contextual cues when/if using.

The idiom to feather one's (own) nest fits the bill which means:

(figuratively) to use power and prestige to provide for oneself selfishly. (Said especially of politicians who use their offices to make money for themselves.): 'The mayor seemed to be helping people, but she was really feathering her own nest.' 'The building contractor used a lot of public money to feather his nest."

How about "money grab"? As in "That bridge-to-nowhere was a big money grab". It's not exactly the same meaning, but it's close.

In American English, that would probably be "Lining his own pockets" if you mean he's making sure he gets some kind of money at the end. To be more like just stealing from the position, you could say he "has his hand in the till [cash register]".

I would suggest dog eat dog. From the Cambridge Idioms dictionary:

if a situation is dog eat dog, people will do anything to be successful, even if what they do harms other people

It is commonly used in the expression: "it's a dog-eat-dog world." I like this one as an equivalent because it expresses the disgust that I believe is implicit in the original and also happens to use the eating metaphor.

I should point out, however, that this expression also implies that the people involved are behaving destructively toward each other which I am not sure applies in the original.

On the lines of a food or eating analogy:

To have your cake and eat it too

It doesn't make much literal sense but it's generally used to imply greed, since one can't eat a cake and still have it later. It's not necessarily used for politics or corruption in my experience of New Zealand English (where hasn't been a huge issue). I don't think this expression is specific to English (although it's been used as far back as Early Modern English). Equivalent expressions exist in many European languages and British or Commonwealth countries associate it with the French or upper class Aristocrasy.

It may bear more resemblance to the Italian:

To have the barrel full and the wife drunk

This is probably used more broadly than politics but may apply here. I don't think the expression "mangia mangia" has a direct equivalent in English, if my Italian friends are to be trusted, Italy has far more colourful and profane expressions when it come to political slang than we do, particularly when it comes to negative (pre-Brexit) views of the European Union.

I think the saying you are looking for is

which translates literally to "dammit Jesus! "dammit! dammit!" being a polite swear if you like: it is predominantly used as an interjection, not so common other than the south of Italy or with non southern-families. It has been in dictionaries since late 1800s I think(I have read books from that era that have it) and I am sure it's originally a corruption of "abbia il malanno"(to have misfortune) and "malann'aggia" or "malannaggia" "may calamity entertain you" , (most of us of Sicilian and Neapolitan stock know it) which in a variety of Italian dialects can sound close to "Mangia Mangia"

Which rather than an imprecation and sign of venting anger is simply what it seems like: "eat eat"; often said to guests to show hospitality (and recalcitrant children to make them eat up!)

It can also be used when you realise you are in the wrong to admit defeat in anger at yourself, and to angrily agree to disagree on a matter and drop it.

In Scottish the closest equivalent is "Damn it to hell!!" of "Ah, F*ck it!" depending on company, probably the same in most English speaking countries.

After speaking to the rest of my family (ages 8 to 112) none of us has ever heard the "Magna magna" variant.