When one looks at any garden, every plant has an official Latin binomial taxonomical name:

E.g. A favourite of mine, Allium hollandicum - Persian Onion

Now most of those with whom I speak call this particular plant an Allium, this is all well and good until one comes to pluralising the word at which point we divide into those who support traditional Latin pluralisation

A check of Ngrams shows a once used 'Rhododendra' (The Greek pluralisation would lead you to believe that this is an historically correct plural) while its more standard plural is far more commonly used throughout the last century and a half. On the other hand, 'Allia' was more frequently used than 'Alliums' until only the 1980s while now-a-days it has fallen at the comparative wayside. 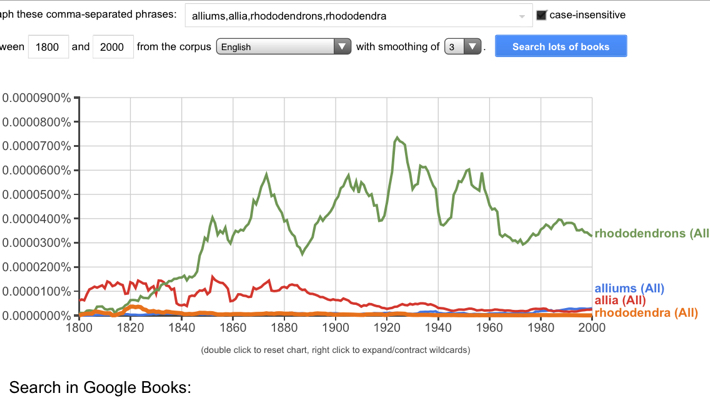 Is there a definitive correct and incorrect pluralisation?

If - as I suspect is the case - it is all rather subjective, are they both acceptable in modern language?

Does this follow through to other species names, e.g. should Homo sapiens be pluralised to Homines sapientes as Latin might suggest?

I think it is safe to concede there is no definitive answer. Per Wikipedia, the trend is toward the informal:

The general trend with loanwords is toward what is called Anglicization or naturalization, that is, the re-formation of the word and its inflections as normal English words. Many nouns (particularly ones from Latin) have retained their original plurals for some time after they are introduced. Other nouns have become Anglicized, taking on the normal "s" ending. In some cases, both forms are still competing.

To make oneself understood, one will adapt to the usage of the community, chatting fondly to neighbours about their alliums and chrysanthemums (while allowing for little jokes in the appropriate strata). There is probably not a uniform answer (i.e., level of anglicization) for all plants and other botanical terms; people still speak and write about arboreta, for example. And, even though mushrooms are not plants, boleti get discussed occasionally (in writing, I presume).

According to the ODO:

As shown in the following extract from the ODO there is no fixed rule to form the plurals of Latin words in English. The more common trend is to use both original (Latin) and English pluralisation rules, but there are exceptions according to usage, meaning and phonetics. Alliums appears to be the more common form used in English ( note that Allia is also a proper name for Ngram purposes)

designated by a Latin or latinized capitalized singular noun.

The first part of the name, which identifies the genus, must be a word which can be treated as a Latin singular noun in the nominative case.

Every species (the species name being the second part of the binomial) is by definition unique. There is only one, although the species name may itself be a Latin or latinized plural. The uniqueness characteristic of species also characterizes subspecies, if and when such exist.

If more than one species of a genus is discussed without the individual species being named, formally (that is, scientifically), the plural is phrasal: 'species of Allium' or 'Allium species', often abbreviated 'Allium spp.'.

Informally, that is, in common or non-scientific use, a number of plurals for a word (which may also be the name of a genus in scientific use) may be current. The choice among them will depend upon the context: the expectations of an audience, an applicable style guide, etc., may dictate which of several plurals will be most likely to be acceptable.

For example, the plurals of octopus (the common name, not Octopus, the genus name), as listed in OED Online, include

The OED entry goes some way toward demystifying this multiplicity:

The plural form octopodes reflects the Greek plural; compare OCTOPOD n. The more frequent plural form octopi arises from apprehension of the final -us of the word as the grammatical ending of Latin second declension nouns....

In sum and for example, there is only one Homo sapiens, although there are multiple Homo spp. However, a homo sapiens (the colloquial, non-scientific noun) or sometimes, also colloquially, a homo sap, may just be and often just is the dude down the street.

Not the answer you're looking for? Browse other questions tagged nouns grammatical-number latin taxonomy or ask your own question.

12
Why is stigmata a plural of stigma?
0
Why does binomial nomenclature seem to break case rules?