The phrase to flay a fox occurs many times in English translations of Rabelais. According to many sources, it means to vomit.

A Classical Dictionary of the Vulgar Tongue by Francis Grose (1796)

A Dictionary of Slang and Unconventional English by Eric Partridge (1937)

These and other sources also mention the variant to flea a fox.

Further, Partridge mentions whip the cat as an alternative (although I'm dubious given that whip the cat seems to have a completely independent meaning).

Here are some examples of flay the fox in Rabelais:

At the time of the paroxysm he used to flay a fox by way of antidote.

The definition meaning "to vomit" is corroborated by the above passage, as well as by the following passage, where a link is presumably drawn between flaying foxes and vomiting:

And all those fine folk were soon puking in front of everyone else as though they had been flaying foxes.

This passage suggests that the origin of the phrase comes from the actual practice of flaying (that is, peeling the skin off of) foxes, a presumably vomit-inducing activity. I've noticed that some translators of Rabelais actually use "skin the fox" over "flay the fox," suggesting removal of skin as the practice which originated the phrase.

But I am perplexed by the following passage, where it is not immediately obvious that flay the fox means "vomit":

With this he took him by the throat, saying to him, Thou flayest the Latin; by St. John, I will make thee flay the fox, for I will now flay thee alive.

Further, Partridge's listing of whip the cat as an alternative suggests that flay should be understood as "whip", rather than "peeling the skin off of", contradicting the above folk etymology. Further, we have many animal-beating idioms which, on analogy, suggests the "whip" etymology over the "peeling the skin off of" etymology. For example flogging the monkey and beating a dead horse.

By googling I have also found a rather intriguing definition which reads:

flay (or flay the fox), verb, phr. (old). To vomit: "from the subject to the effect," says Cotgrave; "for the flaying of so stinking a beast is like enough to make them spue that feel."

Slang and Its Analogues Past and Present, Anonymous

This suggests that to flay, more generally, can mean to vomit. It also corroborates the "removal of skin" folk etymology that I gave. Presumably "Cotgrave" refers to this Dictionarie of the French and English Tongues (1611). But I found no entry for flay. It should be here, but isn't.

My questions are the following:

Q1. Where did the meaning of to flay the fox as "to vomit" come from? It likely has to do with peeling the fur off of foxes, but is this really gruesome enough to warrant an idiom about vomiting?

Q2. What justifies the variant flea the fox? Is flea perhaps derived from a pronunciation of flay?

Q3. How does one reconcile the surely correct "vomit" interpretation with the final perplexing quote from Rabelais (the full context of which can be found here)? [Feel free to ignore.]

Given the mystery surrounding there's more than one way to skin a cat, I'm pessimistic there will be a definite answer to the etymology question, but I'm interested to hear people's thoughts.

This isn't really an answer either—just another piece of information that is too long to fit in a comment. One of the earliest English slang dictionaries I'm aware of is A New Canting Dictionary: Comprehending All the Terms, Antient and Modern Used in the Several Tribes of Gypies, Beggars, Shoplifters, Highwaymen, Foot-Pads, and all other Clans of Cheats and Villains (1725). It has these entries for fox and fox'd:

FOX, a sharp cunning Fellow. Also Drunk ; as, He has caught a Fox, he is very Drunk.

If a person who has "caught a fox" (in the English slang of 1725) is very drunk, might it not follow that a person who is vomiting the residue of his drink is "flaying" that same fox?

Several searches of Google Books for various forms of "flay a fox" turned up nothing beyond the Rabelais translation that Silenus mentions and a handful of dictionaries that cite the phrase in connection with its slang meaning.

As long as I'm here, I might as well add that I don't find very believable the theory that "to flay a fox" means "to vomit" simply because flaying a fox is such a revolting operation. We are, after all, talking about an era when people set dogs on chained-up bears or bulls for entertainment. The Wikipedia article on bear baiting cites an instance in which "a pony with an ape tied to its back was baited." According to a spectator at that event "with the screaming of the ape, beholding the curs hanging from the ears and neck of the pony, is very laughable." I can't imagine that flaying a dead fox would be more nauseating than attending one of these popular amusements that involved tormenting live animals until they died.

Apparently, in the so-called "dark ages", women vomited foxes. Well... it looks like a fox to me, or a rabbit. 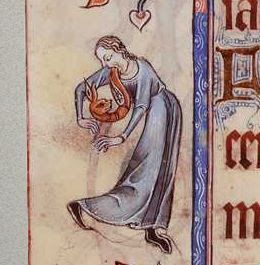 Unfortunately, I couldn't find the source of this particular image, which is an example of medieval marginalia.

Generally speaking, marginalia simply means anything written or drawn into the margins of a book. In the medieval context, marginalia is understood to mean images that exist outside or on the edge of a page’s main program. Collectors Weekly

Unlike the fox I lack his cunning, and I was curious to understand why the cant term, fox, should mean “to be drunk”; Charles Richardson in his A New English Dictionary of the English Language (1836) shed some much needed light.

FOX, v. To deceive, to entrap, to ensnare; and thus, to intoxicate, to make drunk

Clow. So so: as long as we kept the Mop-headed butter-boxes sober; marry when they were drunk, then they grew buzards : You should have them reel their heads together, and deliberate; Your Dutchman, indeed when he's foxt, is like a Fox, For when he's sunk in drink, quite earth to a Man's thinking, 'Tis full Exchange time with him, then he's sublest; but your Switzer, 'twas nothing to cheat him.

The Fair Maid of the Inn

Pantagruael, the protagonist, meets a young scholar and casually enquires where he is from. The reply spewed by the scholar is nonsensical and infuriates Pantagruel who cries, “What devilish language is this? By the Lord, I think thou art some kind of heretick”. As the conversation progresses, it becomes clear among those who assist the encounter, that the young scholar is feigning to be a Parisian, he is only a Limousin “... because he disdaineth the common manner of speaking.”

Thus when Pantagruel cries: “Thou flayest the Latin” he means the pretentious youth with his highfalutin speech is slaughtering the Latin language, (maybe the upper class in Paris spoke in Latin) “... by St. John I will make thee flay the fox” he swears he will make him spit out (spew = vomit) the truth, “for I will now flay thee alive” because he will beat him alive.

Not the answer you're looking for? Browse other questions tagged etymology phrase-meaning or ask your own question.

13
Synonyms for Vomit?
36
Origin of the phrase, “There's more than one way to skin a cat.”

1
“Glen” and “Gael” people
16
Etymology of “bridge” (the card game)
2
(to place) intent and end
5
Etymology and meaning of “to throw a bean ball at someone”
11
Why are dogs “neutered”, horses “gelded”, and people “castrated”?
0
“Fi on You” phrase meaning, etymology, and spelling