What is the origin of the phrase "stand on your head and spit wooden nickels?"

Where does this phrase come from? Was there a time in which it was in popular use? Is it an American English phrase?

Don't take any wooden nickels is a warning to be careful in your dealings and dates from the 1900s.

Stand on your head and spit wooden nickels

As we once said in a prior column, if a duly effective tariff should require the shipper's traffic manager to stand on his head and spit wooden nickels before a particular rate may be applied.

And I wouldn't start a kid on piano lessons at all until he wanted it so much that he was willing to stand on his head and spit wooden nickels." “We encourage creativity first and then add discipline," says Erika Thimey, founder of the Dance Theatre of Washington.

They may have been able to make an IBM 1401 stand on its head and spit wooden nickels, but they may not have been familiar with (or even aware of) today's important concepts of top-down design, modular design, structured programming, and so forth.

Stand on your head and spit nickels

NEWSDAY "There are some actors I would enjoy watching even if they stood on their heads and spit nickels. Laurence Olivier is one. George C. Scott is another. I prefer plot and character to gymnastics. But I'll tolerate just about any vehicle that offers one

Do something and/or spit nickels

"Doctor, if I have one more teacher look at me and smile that smile and ask, 'Are you Dorothy's sister?' as if I was suddenly expected to sprout wings or spit nickels, I'm going to run away from home."

Many a night Ubangi has told the world that he'd walk swamp bottoms for this woman, that he'd drink muddy water and spit nickels for her tender touch.

We have a rolling scenic unit that does everything but spit nickels. It's used as an integral part of the setting for four shows. The unit had to have lights in it.

"Max is very sophisticated," Cameo said. "I suspect Max doesn't listen to you," said Michael. "I heard," Max said. "What should I do, spit nickels?" "Oh, Max," said Cameo.

The following quote was printed in at least six different sources up to 1950, but the earliest I found is a full-view (i.e. verifiable, non-snippet) December 8, 1941 from Life magazine in a profile of General Douglas "MacArthur of the Far East":

MacArthur's record might be summarized by the remark of an A. E. F. private made in 1918: "He's a hell-to- breakfast baby, long and lean, who can spit nickels and chase Germans as well as any doughboy in the Rainbow."

A wooden nickel, in the United States, is a wood token coin, usually issued by a merchant or bank as a promotion, sometimes redeemable for a specific item such as a drink. 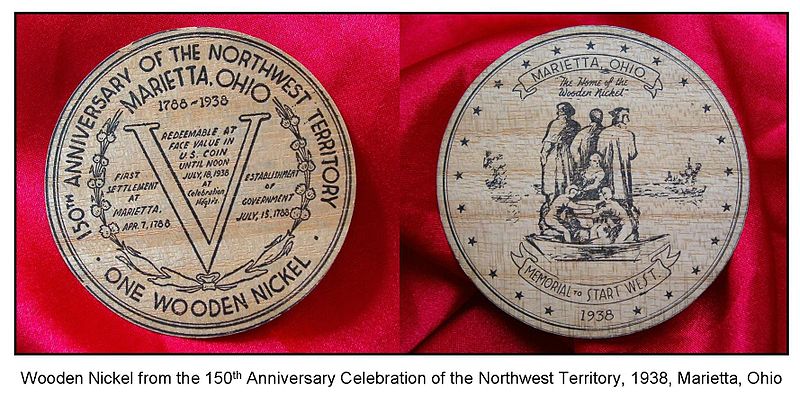 Just when the adage "Don't take any Wooden Nickels!" was added to the American language is unclear, but the reasons are easy to understand. First of all, each wood had an expiration date and generally even a specific final redemption time. If you were in a possession of a handful of wooden nickels that expired at noon today and your best customer came through the door at five minutes to noon, it would be difficult to get to centennial headquarters to cash them in. Many Wooden Nickels also said they had to be unbroken, and the rectangular "Flats" were pretty fragile.

don’t take any wooden nickels! is described by W & F as ‘a c. 1920 fad phrase’ and glossed as Take care of yourself protect yourself (a wooden nickel having, of course, no legal value): but this US c.p. lasted right up to WW2 and dates, suspect, since c. 1900. It was adopted by Canadians; Leechman, 1959, remarking in a letter to me, ‘A c.p. of the last fifty years, and still heard occasionally’. And note that in Ring W.Lardner’s The Real Dope, 1919, it occurs in Jack Keefe’s letter of 16 May 1918, thus: ‘In the mean wile’—until we meet again—‘don’t take no wood nickles and don’t get impatient and be a good girlie and save up your loving for me.’ Cf don’t let anyone sell you a wooden nutmeg!

A letter received in Salt Lake yesterday from Jack Herwig, the old outfielder of the Ogden team, who is now signed up with Butte, saying that he met with an accident in one of the game last week and is now in bed. Jack sends his regards to the bunch and hopes they will not take any wooden nickels.

A Dictionary of Catch Phrases says:

don’t let anyone sell you a wooden nutmeg!, later shortened to don’t take any wooden nutmegs!, ‘stems from Colonial days when sharpers or itinerant peddlers in Connecticut sold imitation nutmegs carved out of wood [and] was a common admonition to the unwary’ (W.J.B., 1975; he adds that ‘Connecticut is sometimes called “The Nutmeg State”’). T.C.Haliburton, in The Clockmaker; or, The Sayings and Doings of Sam Slick, of Slicksville, 1837, mentions ‘the facture of wooden nutmegs,…a real Yankee patent invention’ (Oliver Stonor, 1977). See also don’t take any wooden nickels!

nobody is going to sell me wooden nutmegs. This is a N. Country, esp. Yorkshire, boast of one’s own alertness and freedom from gullibility: since c. 1830. Joan Fleming, Screams from a Penny Dreadful, 1971, has this passage: ‘Better, I thought, take him home and introduce him first to Nanny whose boast always was that “Nobody is going to sell me wooden nutmegs”.’ For both the sentiment and the form, cf the US c.p., don’t let anyone sell you a wooden nickel (or don’t take any wooden nickels), perhaps prompted by the Brit. c.p.

This seems to be a conflation of the idioms "standing on ones head and spitting nickels" and "don't take any wooden nickels". The first use I could find of the first one was 1977. The meaning seems to be either doing something really strange or going to a lot of trouble.

I don't know if this helps, but I found it:

In Ireland a while back was a guy named Pat McGinty who wasn't much to look at but had an oddly compelling personality -- he could convince people to do things they wouldn't ordinarily do. His goal in life was to wake every morning at sunrise, invent a new thing to do, and get someone to try it before sundown. Standing on one's head and spitting wooden nickels is one of his most famous concepts. Others were being a monkey's uncle and taking a flying leap at a rolling doughnut. Lesser known are the following, some of which Pat never got anyone to do:

I was a radioman in the Navy and we used the term spitting nickles as slang for the Q-code 5x5 meaning very good strength and clarity.

"Do you read me?" "You are spitting nickles."

Its an old horseman's term. 'Turns on a dime and gives back change.' Refers to a really well balanced, athletic horse that is quick on his feet, and changes direction easily and nimbly. Change from a dime would be nickels. So 'spitting nickels' is a horse so quick and nimble, nickels are kicked out instead of dirt pieces, when the horse spins and takes off running/galloping in a new direction, as cattle or rodeo horses do.

Not the answer you're looking for? Browse other questions tagged phrases colloquialisms or ask your own question.

2
"The author is by Katherine Patterson" — what is the term for the error in this sentence?