Is there an idiom or typical expression for an unfunny joke? [closed]

Ask Question
Asked 6 years ago
Modified 5 years, 11 months ago
Viewed 40k times
67
Closed. This question needs to be more focused. It is not currently accepting answers.

Could you tell me some suitable idioms to express this situation:

A guy told you a joke, but it's not funny at all.

In Japanese, we say "He slipped" or "His joke was so cold that the air got frozen," for that situation.

Are there any similar phrases in English?

The phrase lame joke is broadly used to describe

(idiomatic) An attempt at humor which is perceived to have been used previously to the point of being cliche, or was never funny to begin with.

A common expression for this is to fall flat (from the "idioms" section of thefreedictionary.com):

The first meaning is the one you're after, so you could say:

I told a joke but it fell flat.

In American English, we would usually say "his joke flopped," or that "his joke was a flop." The noun "flop" is sometimes used informally to mean "a complete failure."

A phrase similar to your Japanese idiom about the air freezing would be "(his joke was so bad), you could hear the crickets chirping." This is referring to the silence that follows a bad joke, as opposed to the loud laughter that would follow a successful one.

So funny I forgot to laugh

In this instance you could say that the joke "went down like a lead balloon" or "missed the mark" (although the latter could imply that it was in poor taste as well as not being funny).

It's worth noting that neither idiom is specific to jokes.

A commonly used term is a groaner, from the reaction of people to the joke.

groaner: a stale or corny joke, observation, or story.
http://www.merriam-webster.com/dictionary/groaner

About as funny as cancer

Obviously offensive, but it makes a joke out of the bad situation. I personally would be careful using this phrase around people that I'm not very friendly with.

You can say it was a corny joke.

Corny usually means "showing no new ideas or too often repeated", but I heard this phrase also referring to a joke simply not funny.

(i.e. to have an opposite and undesirable effect to what was intended).

You could say the joke "bombed" or "fell flat" (which has already been added as an answer). However, this is more in relation to how the joke is received, since the joke could indeed be funny on its own, but it "bombed" with the crowd it was delivered to. Or even the delivery itself of the joke "bombed". Another provided answer that falls into this category is: "flopped". From an article which uses a few of those terms: "Bombing (in Comedy)".

Definition: To bomb as a comedian means that your jokes don't go over with the crowd -- i.e., they get no laughs.

Other forms of expressing this usually refer to death in one way or another, for example I have heard some use the expression: "the joke died on the operating room table".

If what you are trying to communicate is that the joke was truly unfunny, and not just its delivery or reception, then you can say (as mentioned in other answers) that the joke was "lame" (where "lame" literally means "cannot walk properly", or in reference to a limb being disabled), or any other such qualifier (eg: "bad", "dumb", etc).

Yet a third approach, sometimes when a joke is just terrible, some people (for example I have a friend who does this all the time) just respond by saying "womp womp" which is meant to reflect the following sound made by a trumpet, tuba, trombone or other such brass instrument:

Which is often a shortened version of this:

You could refer to a bad joke as a tumbleweed. This works better visually, where the joke would be told and then there would be a period of silence with a tumbleweed blowing past in the background.

The dad joke is a delicate thing. Part knowing humour, part lack of humour, it's only requirement is that it ellicits not a laugh from its audience but the annoyed response: "Daaaaaaaaad".

10 'dad jokes' that will make you question the humour of all men, Daily Telegraph

The article's examples of "Dad jokes" include the following: 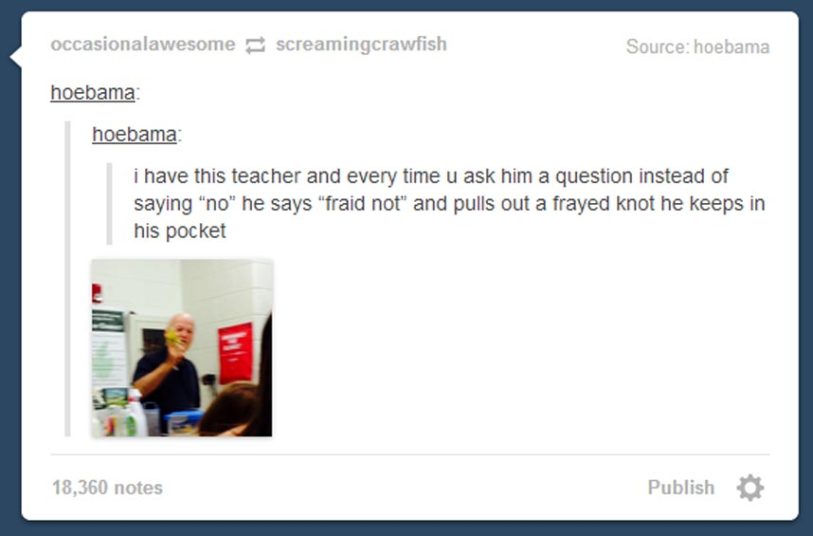 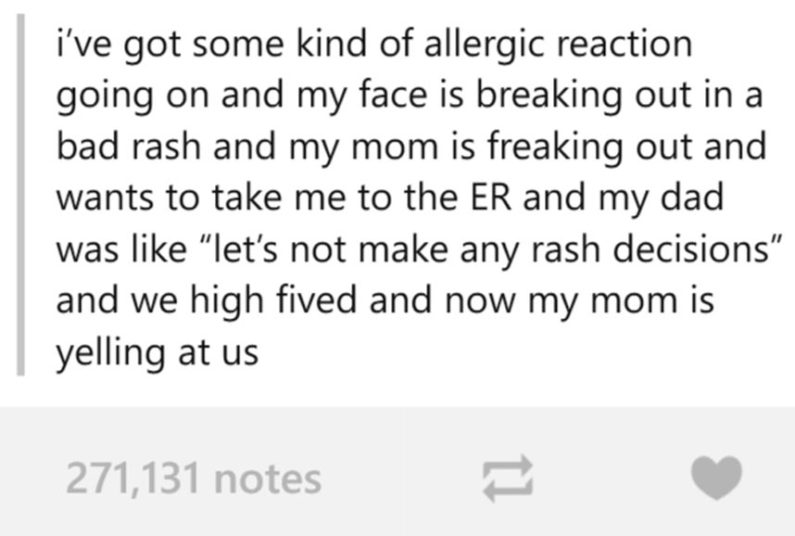 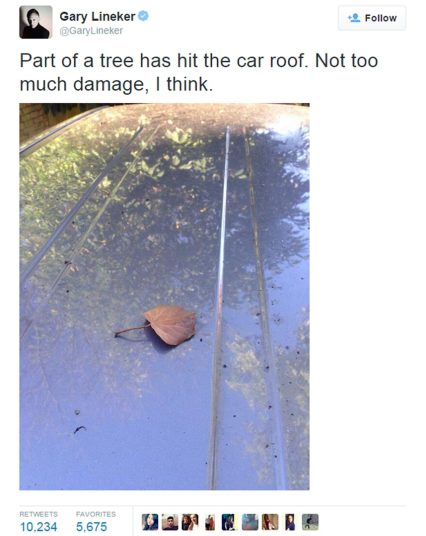 Heavily laboured puns are a common form of "Dad joke"; see "He who would make a pun would pick a pocket".

Usually signified by one of the silent audience making a hand-over-hand rolling motion, suggestive of the way tumbleweed rolls across a movie shot, with only the murmur of the wind on the soundtrack. See wikipedia

Sometimes we say we "heard crickets chirping" after a poor joke. This is also present in cartoons as a sound effect when a poor joke is told.

I have heard the term too hip for the room as in "the joke was hilarious, but it was too hip for the room." It means that someone (usually the teller) thinks the joke is funny but the people who heard it where not "hip" (i.e. knowledgeable about the latest fashions or music, current events,celebrity news, etc.) enough to understand it.

A lot of the answers here interpret the question as, "What do you call a joke that isn't taken as funny by the audience?" But to me the question seems to ask, "What do you call a joke that just isn't funny?" The former is an objective observation about audience reaction; the latter is a subjective observation about the joke itself. Which interpretation is actually intended here?

Of course, "not funny" is a subjective statement, but it is a statement about the joke itself. So what do we call a joke that is "not funny" as opposed to fails with an audience?

He got to the punchline but it was a clanger, and no-one laughed.

This term is actually used quite frequently, with the word "not" being emphasized.

For example, for this YouTube: Clip from the Star Trek: Generations movie, notice how the author emphasized "NOT" in capital letters (for the clip's title). (Somebody uses that exact phrase towards the end of the clip. Actually, having seen this in a theater, there was plenty of laughter... it was quite hilarious, particularly for viewers who are familiar with the characters, but this one character didn't overhear all of the other conversation and so he wasn't familiar with the whole story, which is why he said his incorrect statement.)

Somehow, I've often heard this phrase used when trying to teach people certain values, hoping that people will then choose to not repeat some phrase or action.

If the joke is being told to multiple people, a response, especially from the joke teller, might be "tough crowd". This can be used itself in a humorous way: an unfunny joke is "blamed" on the audience being unreceptive, rather than in the joke teller or the joke itself.

A common reaction is to make the following 3 noises in succession: "ba dum tish" - a reference to the sound of banging a drum twice and a cymbal once, a common sequence used by drummers to punctuate jokes when there is some sort of comedy stage play or acting going on.

Essentially similar to the tumbleweed and cricket comments, when used after a bad joke it's a sort of "that joke was so bad, I don't think anyone will realise it has ended/the punchline had been told, unless I make these noises"

Occasionally the sequence is expressed as a joke itself: "Two elephants and a cymbal are thrown off a cliff..." - a reference to the resulting noise that will occur when these three objects hit the bottom

If you're okay with a more vulgar, colorful idiom, you could say that it went over like a fart in church. I can't find a non-Urban Dictionary reference, but this Google N-gram should confirm that it dates back to approximately the late 1950s.

Would be the real expression for an unfunny joke

Not the answer you're looking for? Browse other questions tagged single-word-requests phrase-requests slang idiom-requests or ask your own question.

-1
Is there a word in English for a joke that isn't funny?
52
Meaning of the phrase "womp womp" in American English?
3
What's a word that means the same as "tumbleweed in a desert" symbolizes?

41
A word for a joke so poorly told and so unfunny that one cannot help but laugh
2
What is a popular idiom for making a mistake that results in utter failure?
1
Is "Donald Trump finally dropped the ball" the right expression?
11
Term or idiom to describe a best friend since your childhood
1
Nuance of accordingly and request for its equivalent phrase
5
Is there an expression or idiom to express in an informal/funny way that it is a person's fault when something is not working?
0
What is the opposite of "to go" like in "a hot dog to go"?
1
Idiom for botching a lucky opportunity
7
Are there any phrases or idioms to describe someone rejected the chance to do something at first, but liked it the moment they tried it?
2
Idioms for keeping the big picture in mind while picking out the details