What are the pronunciation and etymology of the dog's name "Tige"?

"Tige" was apparently a popular name for American pet dogs even before Buster Brown (1902). I just ran across the same name in chapter 32 of Huckleberry Finn (1884):

All other dog-names I can think of have relatively transparent meanings: "Fido" for "loyal", "Rex" for "king", "Spot" for... well, "spotted". But I have no idea what "Tige" means, or even how to pronounce it! Can someone point to an authoritative source on the subject?

I know that tige is a French word meaning "stem" (cognate with Latin tibia); it's pronounced /tiʒ/ "teezh". But I can't imagine how the dog-name would be related to the French word.

I also know that many people on the Internet assume that it's some colloquial shortening of "Tiger", so they would presumably pronounce it /ˈtīɡə/ or maybe /ˈtīɡ/. But are there any examples of dogs actually being named "Tiger", let alone a shortened version of "Tiger"?

I found a TV commercial for Buster Brown Shoes whose jingle pronounces it /ˈtīɡ/; that's pretty authoritative on the pronunciation (at least if the pronunciation didn't change between 1884 and 1950-something), but it doesn't say anything on the etymology.

And speaking of dates: Given that Buster Brown didn't originate the name "Tige", how far back does the name go? Any examples from the first half of the 19th century? from the 18th century? from countries other than the United States?

I believe "Tige" is indeed a shortening of Tiger, and would be pronounced like tide with a hard g in place of the d.

From a story in the Atlantic Monthly published in 1860, apparently by Oliver Wendell Holmes, Sr (father of the famous American jurist by the same name):

Tiger, or more briefly, Tige, the property of Abner Briggs, Junior, belonged to a species not distinctly named in scientific books, but well known to our country-folks under the name "Yallah dog." They do not use this expression as they would say black dog or white dog, but with almost as definite a meaning as when they speak of a terrier or a spaniel. A "yallah dog" is a large canine brute, of a dingy old-flannel color, of no particular breed except his own, who hangs round a tavern or a butcher's shop, or trots alongside of a team, looking as if he were disgusted with the world, and the world with him. Our inland population, while they tolerate him speak of him with contempt. . . . Tige was an ill-conditioned brute by nature, and art had not improved him by cropping his ears and tail and investing him with a spiked collar.

Apparently, a yellow/yaller dog was a term for the breed now known as a Carolina dog (see Wiktionary and also this well-documented discussion).

However, I suspect that Tiger nn Tige was probably a name given to any yellowish or orange-y or otherwise tiger-like dogs (for example, if they were particularly large or ferocious). Buster Brown's Tige was an orange-brown; he is apparently commonly believed to have been a pit-bull, and was portrayed that way in film shorts (you can see the shorts in this blog post). 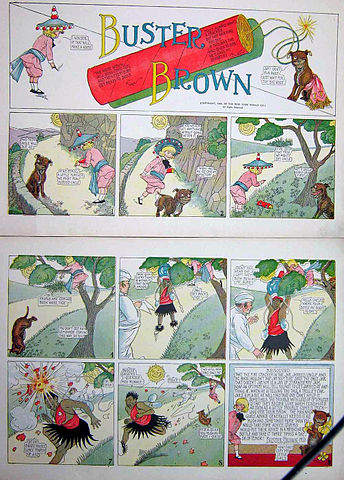 Looking at Ngram, Tiger/Tige seems to have come into vogue as a dog name sometime around the time that Holmes wrote his story, but I don't believe he originated it. 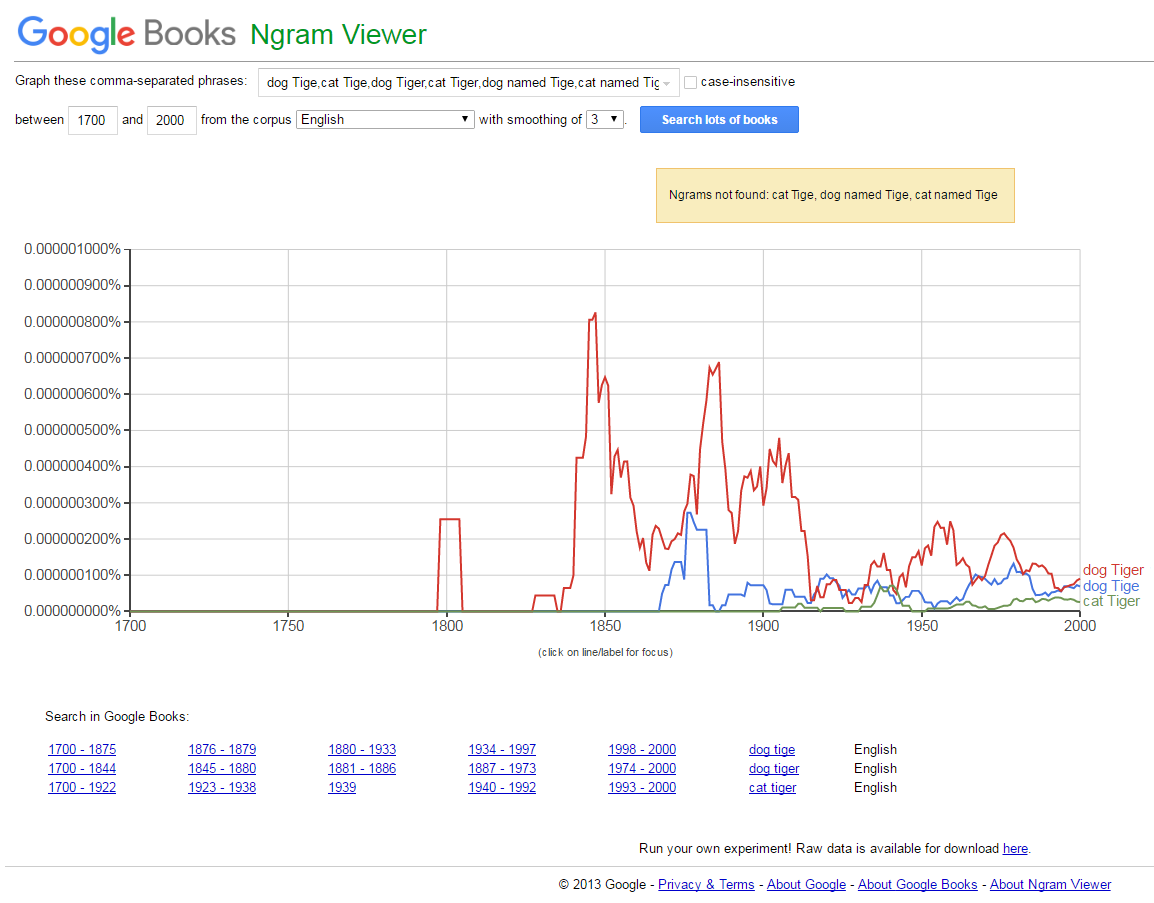 There is an 1837 story by Edgar Allen Poe with a dog named Tiger (in that case a Newfoundland, which are large but not yellow), an 1847 story that mentions a "little yellow dog, Tiger," and the earliest example I can actually see any part of is from 1791 (combining snippets):

...Mr. Stinton's great dog Tiger made his unexpected appearance upon the stage, and joined in the fighting scene betwixt Posthumus and Jachimo. —E. Cave, from The Gentleman's Magazine, here and here

which suggests the ferociousness aspect.

Interestingly, an 1857 novel by Francis Butler entitled The Life and Adventures of the Celebrated Dog Tiger features a bull-dog/fox terrier mix (who himself narrates the book) who is apparently known for NOT being yellow, deplores the quarrelsome reputation of bull-dogs, and leaves it to the reader to determine "[h]ow far [he] may have merited this ferocious title".

Some of these sources might have been influential, but they look as if they are following a pet-naming trend, rather than setting one (particularly those that appear to be relating stories from real life), so it's hard to say whether there was a particular "source" for this name or whether it spontaneously occurred to various individuals as a good dog name.

For a more recent example of a dog named Tiger, see the Brady Bunch dog, who was tawny and largish.

**Edited to clarify the first sentence. **Edited again to add, as requested:

As suggested by @niallhaslam, Tige used for contemporary dogs may be an Anglicization for the Gaelic given name Tadhg. This was the name of a medieval Irish king. See Behind the Name for more details. Its diminutive form, Anglicized as Teagan, might be more familiar to (American) English speakers.

However, it is unlikely that this derivation accounts for the bulk of nineteenth- and early twentieth-century pets called Tige, because giving animals "people" names is a relatively new innovation. This article by Stanley Brandes offers fairly compelling evidence for this anecdotally-observed phenomenon (since pet names aren't centrally registered the way human names are).

On further investigation, one possibility that would make the Tadhg theory somewhat more likely, at least for some dogs Tige: the Anglicization "Taig" has apparently been used as both a term of ethnic pride by Irish Catholics and a racial slur by British Protestants referring to those same Irish Catholics (see Wikipedia's entry on Tadhg).

Dogs who are looked down upon (e.g. "cur dogs"—thanks for the phrase, @Sven Yargs) are often evoked in slurs (in fact, the poem cited in the Wikipedia article on Tadgh explicitly contrasts "Cromwellian dog" with the "Popish rogue" who eventually identifies himself as "Taig"), so it would make sense that naming of those dogs could flow the other way. Thus this connotation of the sound "tige" (hard g) might have influenced some instances of dog naming. In that case, I would expect Tige to be most popular as a dog name in areas with a significant anti-Irish Catholic sentiment/population, and significantly less common as a name for dogs owned by Irish Catholics in that era. Unfortunately, the data available to me is not detailed enough to properly draw or refute this hypothesis.

Related question: When did we start naming our dogs Rover, and Why? (which handily also addresses "Fido").

1. Are there any examples of dogs actually being named "Tiger", let alone a shortened version of "Tiger"?

The earliest example I could find of a dog named Tiger is from "Select Poetry, Ancient and Modern, for April, 1791," in The Gentleman's Magazine (1791):

The inclosed Occasional Epilogue ["Occasional Epilogue, For Mr. Stanton's Great Dog Tiger"] was written and given, March 11, to Mr. Stanton, the Master of a respectable Company of Players, who visit Uttoxeter and the other principle towns in Staffordshire and the neighbouring counties periodically. The occasion of its being written was an adventure which happened at Mr. Stanton's new theatre at Newcastle, in Staffordshire, while the Company were playing Cymbeline ; when Mr. Stanton's great dog Tiger made his unexpected appearance upon the stage, and joined in the fighting-scene betwixt Posthumus and Jachimo.

Several other instances occur in the mid-1800s. From "Sagacity of the Dog," in Dwight's American Magazine, and Family Newspaper (January 30, 1847):

Near to my father's house there lived a retired sea-captain, in all the comfort which well earned wealth could afford. He was a good old man, and had ever a kind word and pleasant smile for me, however often I might meet him. As I think of him now, I cannot very well separate his image in my mind from his little yellow dog, Tiger, who was always at his heels, excepting on the Sabbath. I am sorry to say that my old friend was no meeting-goer, but then Tiger was. With the females of the family he was always at church on Sunday.

From The History of Sandford and Merton (1853):

One morning his father got up early to go to the ale-house, where he intended to stay till night, as it was a holiday ; but before he went out, he gave his son some bread and cold meat, and sixpence, and told him that he might go and divert himself as he would, the whole day. The little boy was very much pleased with this liberty; and as it was a very fine morning, he called his dog Tiger to follow him, and began his walk.

And from Francis Butler, Dogo-graphy: The Life and Adventures of the Celebrated Dog Tiger (1856):

My young master was the first to arrive, when he exclaimed, "Seize him, Tiger! shake him, Tiger! good dog, Tiger!" upon which I redoubled my efforts, wofully lacerating the bleeding seat and understandings of the invader, who, on hearing my master's voice, pleaded so hard for mercy that I was called off; upon which he was dragged out and safely conveyed to the kitchen.

2. How far back does the name Tige go?

In Google Books search results, the earliest instance of Tige as a name explicitly identified as a short form of Tiger is from Oliver Wendell Holmes, "The Professor's Story," in The Atlantic Monthly (February 1860), later published as Elsie Venner: A Romance of Destiny (1861):

Tiger, or, more briefly, Tige, the property of Abner Briggs, Junior, belonged to a species not distinctly named in scientific books, but well known to our country-folks under the name "Yallah dog." They do not use this expression as they would say black dog or white dog, but with almost as definite a meaning as when they speak of a terrier or a spaniel. A "yallah dog" is a large canine brute, of a dingy old-flannel color, of no particular breed except his own, who hangs round a tavern or a butcher's shop, or trots alongside of a team, looking as if he were disgusted with the world, and the world with him.

And likewise, from Virginius Derby, Gold That Did Not Glitter: A Novel (1889):

But I spoke too fast when I said that Bessie alone was awake. Tiger was not asleep. Tiger (Tige, for short) was Uncle Reuben's 'coon dog. A large brindled cur, good at his trade, and very fierce withal.

"Yes, sir, Tige he part bull ; but de reason he so oncommon ambitious, I sprinkle gunpowder on he victuals when he was a puppy.".

A play by Witter Bynner, Tiger (1913) features a woman known as Tiger, whom another character repeatedly addresses as Tige:

BARON. Lord, Tiger, give her something!

TIGER. This is my business now. You've done your part. Get out of here!

TIGER. Come back on Tuesday. These little cooings will be over then.

BARON. They're over now. I love you, Tige, you devil! {He kisses her passionately}

Tiger has been used as the pet name for a dog since at least 1791, and Tige as a short form of Tiger is attested at least as far back as 1860.

The name is an anglicisation of the Irish name Tadhg, meaning poet or philosopher. Other common spellings are Tighe, Teague.

Not the answer you're looking for? Browse other questions tagged etymology history names or ask your own question.

8
When did we start naming our dogs Rover, and why?