From the Spanish “xaquima” to the AmE “hackamore” 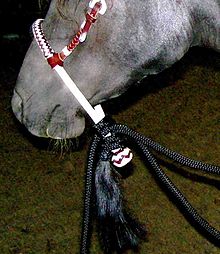 The Spanish origin of the term appears to be confirmed also by Etymonline:

In the Word Origins...And How We Know Them: Etymology for Everyone Anatoly Liberman explores the possible origin from a nursery rhyme starting with "Hick-a-more, Hack-a-more", but it does not appear to be related to the meaning of "halter".

The earliest occurrence in print of hackamore I have found, in this cowboy story from 1850 (very likely the source alluded to by Wikipedia and Etymonline), explicitly associates it with the Spanish term. ('Pete' is 'Dutch' or German, the 'old man' is apparently Mexican.)

“When a broncho is lassed, he is fust choked down, then a hackamore is put on him. Know what a hackamore is, Pete?”
”No, I tidn’t.”
”Wall, a hackamore is a Spanish halter, that is made so as to slip when a rider pulls on it, and draws a hoss’ nostrils together and shets his wind off.”
”It’s a jáquima,” said the old man; “an invention of the Moorish Arabs.”

Hackamore = /hækəmor/ is a quite natural and until you get to the very end almost inevitable Americanization:

56
What happened to the “ch” in moschito?

5
English pronunciation by Spanish speakers
3
AmE Phonetics: T-voicing after <l>
6
What line do they refer to in the idiomatic expression “on the line”?
6
How did Spanish “Sevilla” become English “Seville”?
6
What is the difference between 'man' and 'human'?
7
From the horse jockey to the disc jockey
8
How did an egg and cheese dish come to be known as “Woodchuck(s)”?
6
Is there an alternate meaning of hoosegow?
56
What happened to the “ch” in moschito?
3
What's an equivalent way of saying *friolenta* (from Spanish)?