Does the word butterfly derive from transposition of word order, i.e., "flutter by"? Several dictionaries that I looked this up in so long ago that I've forgotten which ones, said either "origin unknown" or referred to butter, or German or Dutch words for butter, which doesn't seem to make sense, in that butterflies seek to ingest flower nectar, not butter.

Concerning the etymology of 'butterfly', several theories have been proposed. Ernest Adams in Notes and Queries, 1876, first observes that the second element of the word poses no particular etymological difficulties, then ably summarizes the theories:

The following theories have been advanced. Skinner writes, "nobis sic dictus ob levitatem fere butyraceam alarum hujus animalculi," because its wings are as smooth as butter. An earlier authority, Kilian (Etym. Teut. Ling., 1605), imagines that it was so called from the fact that its excrement resembled butter; basing his theory doubtless upon one of the Dutch names mentioned above. And this theory has been sanctioned by one of our ablest philologists, Mr. Wedgwood. Grimm suggests that the name was given, "weil man glaubte dass Schmetterline, oder Hexen in deren Gestalt, Milch und Butter stälen," because "they, or witches in their shape, stole milk and butter." Another theorist would explain the name by the fact (?) that butterflies are of the colour of butter, and yet another because the insects appear at the time when butter is made.

Adams (an amateur lepidopterist), then continues:

All these theories are felt both by the philologist and the lepidopterist to be eminently unsatisfactory. ... As one who loves these insects, I may perhaps be pardoned if I venture to add one more speculation to the unsatisfactory roll.

I find Adams' "speculation" more consistent and plausible than any of the other theories proposed. It is as shown in the following clip: 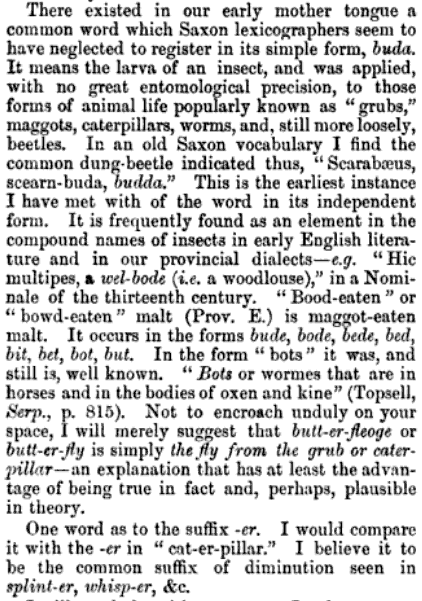 Not the answer you're looking for? Browse other questions tagged etymology word-formation or ask your own question.

12
Etymology of 'doylum'
3
Etymology/word formation of “program” (as in computer program)
2
Etymology: bedraggled
0
Etymology: Camelot
14
What is the origin of “rat”?
0
Etymology: 'to commit'
1
Phew! Etymology
2
Etymology and usage of “enfetter”