A word to describe a couple conjoined at the earbud

Considering how common it is, I would think that we need to create a word for a couple that is conjoined at the earbuds, as in 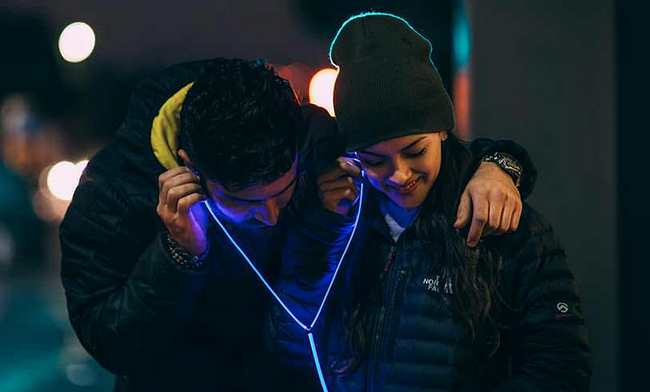 I couldn't find an appropriate word in the Urban Dictionary.

Urban Dictionary actually suggests several terms for this phenomenon. Among them:

dipoding [December 4, 2005] A word meaning "dual ipoding". I came up with this word to describe the often-seen act of two people sharing an ipod (one person has an earbud in one ear, one in the other). This can be done with a CD player as well, but it seems to look cooler with an ipod for some reason. It also may be more common with ipods because fewer people have one.

ipod sex [January 11, 2006] The simultaneous use of an ipod by two people, whereby one of the participants uses the designated right earbud and the other participant the left.

bipodding/BiPodding [February 21, 2007 & February 25, 2007] The act of sharing an Ipod's headphones so that two people can listen at the same time, each using one headphone. [or] Sharing a single set of headphones attached to one iPod. One person holds the iPod and takes the left earbud, the other takes the right earbud. Can be performed while moving.

ear cuddling [November 29, 2007 & September 25, 2013] The act of two people sharing a single set of headphones attatched to one MP3/music player. [or] When Two People Share Ear Buds Together.

YPodding [June 30, 2007] The act of sharing one of your earbuds of your iPod with a friend, creating a Y-shape with the cables.

One problem with product-specific slang is that it can quickly become obsolete if the product it's tied to loses cachet (or vanishes altogether). When the iPod lost most of its market share to the iPhone (and to competing music-capable smartphones), the appeal of most of the terms suggested above vanished. It's regrettable in this case because "YPodding," especially, seems nicely descriptive of the photograph in the OP's question. On the other hand, ear buddying and ear cuddling may survive because they aren't tethered to a particular product or product category.

One Urban Dictionary concept that I think might have some staying power is earphone distance (or more accurately, earbud distance): "[January 14, 2008] The distance two people have to be from each other in order to share the earp[ie]ces of a single set of earphones."

Not the answer you're looking for? Browse other questions tagged neologisms or ask your own question.

4
Are the words 'innuendo' and 'insinuation' different in meaning?
4
What could be a word for this concept?
4
A word to describe "political buyer's remorse"
1
Has the word "manal" (instead of "manual") ever actually been used? If so, how?
0
Is there a word for pleasing numbers?