The word krapfens means "donuts": in Italy it is quite common to see it in German as well as in English; I guess that's because Italian borrows many original expressions from foreign languages.

It seems to me that in in England, in America and in other countries where English is the official language, the situation is different: people don't borrow many original words and expressions from other languages and consequently they like words which are easy-to-spell, therefore non-English words may be less popular.

Given that, I guess donuts is more popular than krapfens to point out the same object. Am I wrong? 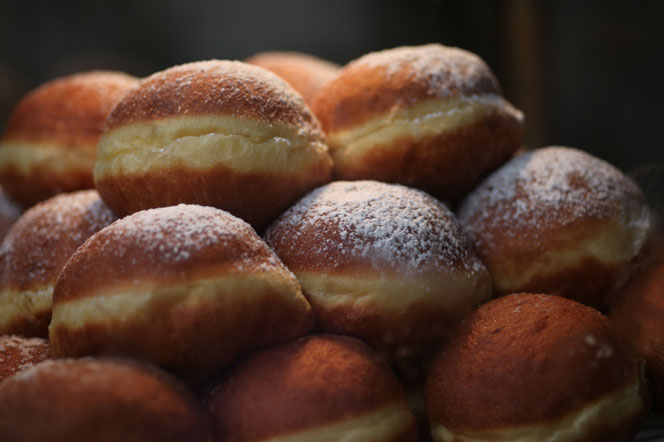 On the contrary, English has an extremely rich vocabulary because is has adopted so many foreign words.

It is natural that the German term is commonly known in Italy, since northern Italy has a sizeable native population of German-speakers (62.3 percent of the population of Trentino Alto Adige / South Tyrol). England obviously does not, but the large number of German-speaking migrants to North America have gifted the English language with many, many loan words, particularly for food.

As to the question of why krapfen is not a commonly known term in English, when a perfectly serviceable word already exists in English, it can be hard for alternative word to gain traction. Doughnuts has been in the English language since roughly 1800 (Wikipedia), and it is more descriptive to the English ear than krapfen and lacks the scatological connotation, so it is not surprising that doughnut is common and krapfen obscure.

Perhaps you need to consider first why loan words enter a language. Three reasons suggest themselves to me:

Let us look briefly at British English in relation to these categories.

In conclusion, the introduction of loan words into British English, as with other languages, has specific causes, and is not the result of the whims of individuals, as the question implies.

Not the answer you're looking for? Browse other questions tagged dialects loanwords food or ask your own question.

5
What's the term for flickering eye movement
31
From which language has English borrowed the most words?
5
Pronunciation of foreign words in American vs. British English?
5
Where and what is the well those cheap drinks come from?
2
Is this meaning of “scurrilous” only known/understood to speakers of American English?
6
Do Old English dialects correspond well with modern English ones?
29
Will the word 'schadenfreude' be understood in an English text?
5
What is the first known Japanese loan word that entered the English language?
8
Why is the English word of Chinese origin “Shih Tzu” used to refer to a dog breed not known in Chinese as “Shih Tzu”?