Architectural term for this large horizontal structure below an external window?

What would one call the large horizontal structural fixture (on which the five faces are embedded)?

The image is from the Chicago Civic Opera Building, built in 1928.

This throne-shaped 49-story skyscraper is home to the internationally renowned Lyric Opera of Chicago. It features Art Deco and Art Nouveau styling and ornamentation, musical motifs and an impressive arcade that runs the length of the east facade

Is there a precise, technical architectural term for such a substantial, protruding, horizontal structure below an external window?

Note that I am not asking about the decorations on the structure, the faces, but the structure itself, which would presumably have the same name even if it were plain (if that's not the case, please do mention that in your answer).

What would one call the large horizontal structural fixture [...] specifically the component between the two corbels?

The most appropriate term I found, and one which matches the description and the image posted by the OP is 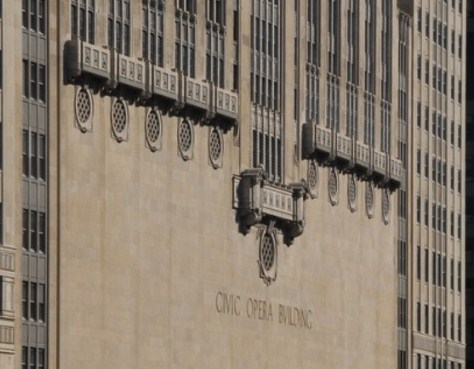 If we look at the definition of corbel we find:

corbel: A masonry block projecting from a wall to support a superincumbent element.

Technically, the central structure featured in the OP's question, is a “superincumbent element”. It also resembles a balcony owing to the presence of the corbels; however, the central protruding section is extremely narrow and the wall particularly low, which suggest that it is only a decorative element of the façade with no practical function or use. The question arises whether it is actually deep enough for a person to stand. Moreover, the “adornment” does not appear to be an extension of the double-hung windows, which would rule out the answers; sill suggested by @Phil Sweet, and the stronger contender (in my opinion) apron (now deleted) given by @Joe Blow.

I propose the following: balconet or balconette

From Sturgis' Illustrated Dictionary of Architecture and Building (1901-02)

A railing or balustrade at the outer plane of a window reaching to the floor, and having, when the window is wide open, the appearance of a balcony.

From Volume III the following term, parapet, as defined below could also be taken into consideration. 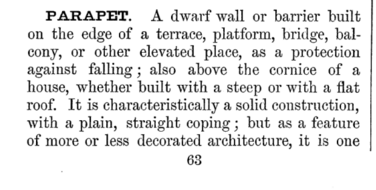 Cont'd.
of the first to be emphasized by panelling and tracery, often peierced with great richness and delicacy of detail ...

Because images speak louder than words.

Why that structure cannot be a sill nor an apron 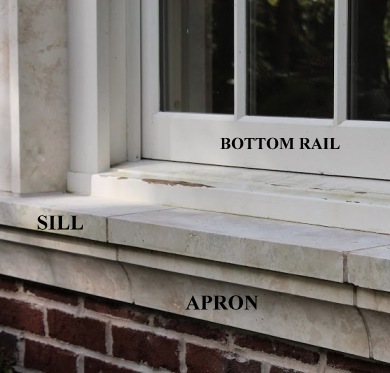 For more diagrams and illustrations of window frames, sills etc. I found these two sites the most helpful

The building in question is the home of the Lyric Opera of Chicago built in 1929. The Art Institute of Chicago has the clearest photo I have seen of the west exposure, as built. 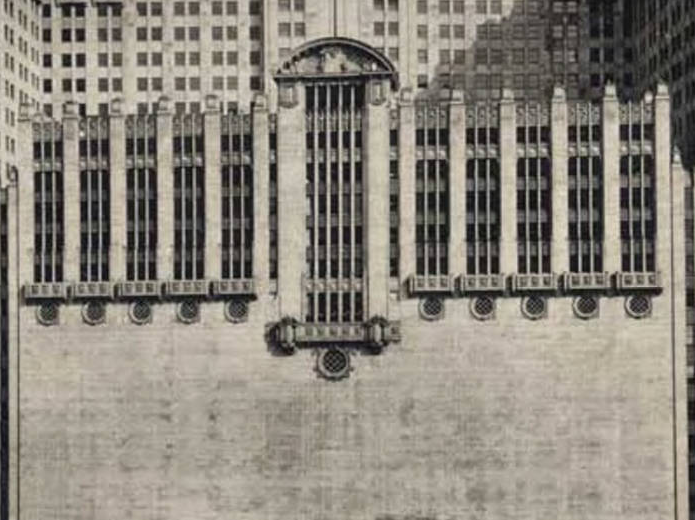 Identifying the architectural styles employed will allow us to focus the search for the name of the specific decoration. In pursuit of that, I turned to The History of the Civic Opera House, which has this to say:

The decorative character of the entire building is a hybrid of Art Nouveau and Art Deco styles. Comedy-tragedy masks and cornucopia of instruments abound as playful ornaments around entrances, inspired by the Paris Opera House designed by Jean-Louis-Charles Garnier.

There is also full discussion of the building's history at The City of Chicago Landmark Designation Report, which contains description of the ornamental style employed by chief designer Alfred Shaw at page 12:

The designer, Alfred Shaw, "... had an appreciation for the classical, Shaw sought to bring a modern interpretation to its use in contemporary design"

And further examination of the Landmark document pages 6-7 and 11-14 seems to support the idea of a modern interpretation of a classical theme.

Given this, I believe the element is a modern interpretation or expression of the classic entablature. The masks in its face are frieze elements.

From the Columbia Electronic Encyclopedia™ (2013, Columbia University Press), for example:

ĕntăb`ləcho͝or
The entire unit of horizontal members above the columns or pilasters in classical architecture—Greek, Roman or Renaissance.

The height of the entablature in relation to the column supporting it varies with the three orders, Doric, Ionic, and Corinthian, but in Roman and Renaissance interpretations it is generally about one fourth the column height.

The entablature's component members are the architrave, which rests directly upon the abacus, or top member of the column cap; the frieze; and the cornice, or topmost member.

Essentially the entablature is a development from the primitive lintel, which spans two posts and supports the ends of the roof rafters.

In Renaissance and modern designs the entablature is also used upon a wall as the crowning member or as a horizontal band, irrespective of columns.

But I think we can get even more specific than this. If one examines the photos at the Lyric Opera site as well as page 9 of the Landmark Designation report, there is a pediment that has been removed several storeys above what I have called the entablature.

This would make the structure in question a stylized plinth using the order¹ of an entablature. This is supported by scrolled corbels (as had been noted in an earlier answer) starting about six storeys above the river. The columns are more suggested by decoration than relief or structure.

Removal of the pediment strands the 'plinth' in many respects, which bears examination in its unified (and original) context which is the whole west wall, rather than singled out and stranded.

From p174 of Architecture for Community and Spectacle: The Roofed Arena in North America, 1853-1968:

...Wall expanses were treated as decorative fields, not embellished but set off as planar surfaces against zones of focused ornament, as was done, for example, on the river face of the Civic Opera Building in Chicago (Graham, Anderson, Probst & White, 1929).

¹ Order definition: 19. Architecture a. Any of several styles of classical architecture characterized by the type of column and entablature employed. Of the five generally accepted classical orders, the Doric, Ionic, and Corinthian orders are Greek and the Tuscan and Composite orders are Roman.

Sill should do, unless there is something specific to opera houses.

Previous suggestions have been good. I would add (back) apron: "a raised section of ornamental stonework below a window ledge, stone tablet, or monument."

"Cornice," "lintel," and "pop-out" are also worth considering. Also, in French, it would be called a "tablette d'appui."

The horizontal decorated structure you see on the facade is an architectonic motif. In this specific case it is one of the Art Deco architectonic motifs which are often characterized by emphasised geometric forms as suggested in the following extract:

The fact that they look like a sill, a balconette or a parapet for instance, is part of a geometrical optical effects typical of Art Deco.

Frieze is another term:

Here are other examples: 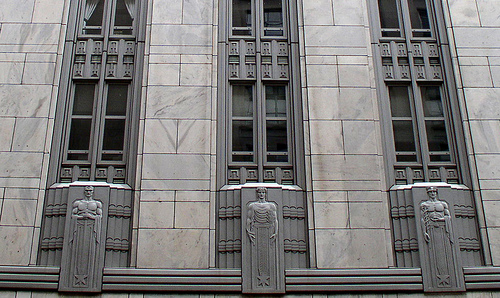 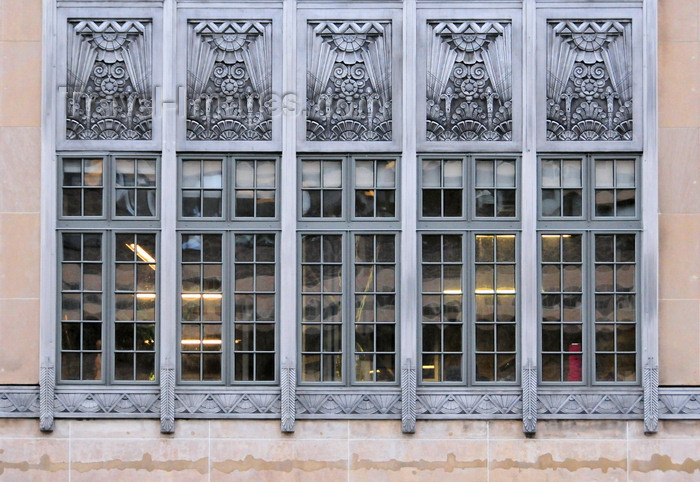 P.S. I don't know if there is a technical term for these "motifs", but they are generally referred to also as elements or figures.

Not the answer you're looking for? Browse other questions tagged terminology image-identification architecture or ask your own question.

0
What is this architectural element called?