Why does a good gardener have a green thumb and not a green finger or hand?

Why is a gardener's thumb singled out for especial greenness?

Where did that idiom come from?

As this NGram shows, thumb was once less common than fingers. For some reason people have never been particularly keen on thumbs or finger, but they get used too. As Neil Coffey commented, fingers remains more common in British English.

Green hands do in fact exist too, but sometimes simply alluding to the inexperience of general-purpose unskilled employees. I think thumb wins out in the end because the singular is a bit simpler, and thumbs don't have so many other associations that might confuse the imagery.

My chart combines US and UK usage figures, but looking at the patterns for each country separately makes it clear that US thumb and UK fingers became far more dominant in their respective countries from about the 1940s, with little change in usage figures for whatever word was being used on the other side of the pond. I think this may be a result of increased commercialisation of "domestic horticulture" at the time. This probably led to a proliferation of books, magazines, local clubs, etc., and these by their very nature would be far more likely to encourage standardisation around an easily-recognised term.

Thus it may be little more than a fluke that the US standardised on a different term - if neither was particularly well known before, either would be happily embraced by commercial and social networking interests. But standardisation would be very much encouraged thereafter, whichever form happened to have taken the early lead.

Obviously a gardener spends a lot of time handling plant material, much of which is green and might therefore stain one's digits. Since the metaphorical usage is so transparent, it could be re-coined many times. It would normally be understood on first hearing, and often passed on by the hearer, so the expression could have had multiple opportunities to both germinate and thrive.

The thumb and forefinger are generally used to pinch back plants. Considering the special function of the thumb resulting from its anatomical difference (it is opposable to the other four fingers of hand and has two phalanges instead of three), it is necessary to achieve the objective. I think that the use of thumb rather than other fingers or the whole hand in this idiom is to emphasise its importance in relation to the task.

In addition to the previous comments, I have another theory. Upon removing false nails recently I discovered my nails/skin had dark green patches or stains. Unwilling to think I was turning mouldy, I turned to the internet.

I discovered ‘Green nail syndrome’ a condition where bacteria have been able to thrive in a warm, moist environment. Aside from being a common occurrence in false nail wearers, it also made clear that anyone whose hands are regularly submerged in water/moist environment or in contact with soil or animals, might experience this at some point. It would then seem to make sense in terms of regular gardeners. Just a thought. 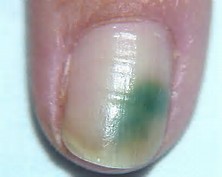 Pseudomonas aeruginosa is a common bacteria that can cause disease in plants and animals, including humans. It is found in soil, water, plant, pets, skin flora, and most man-made environments throughout the world. When it grows, its waste produces pigments that impart the green color of chloronychia (the technical term for green nails caused by p. aeruginosa bacterium). Common Nail Disorders: Chloronychia aka "Greenies"