Does "mouse" in the computer sense come from nautical slang?

Computer "mouse" is an English term known and used worldwide. Reference about its origin appears to suggest that the term, which obviously refers to the shape of a small mouse, may actually come from nautical slang.

One nautical usage I could find refers to a technique called mousing: 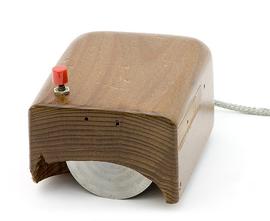 A man named Douglas Englebart introduced the mouse in 1968, and it's likely that the name derives from its appearance and movement. People noticed, for example, that the mouse-like shape and size, including a wire that resembles a tail, all pointed to the easy-to--remember name mouse. One can also speculate that the advent of computers created a need among amazed (and threatened) people to bring this incredible piece of technology into the more comfortable human world by giving it a familiar name based on its animal-like attributes.

Is there any evidence that may suggest that the "trackball" device invented by Ralph Benjamin was colloquially referred to as "mouse" before the 1965 publication?

No. The device invented by Ralph Benjamin was not called a mouse. In an interview in The Telegraph, he says:

The article says Benjamin's team called the device a ball tracker. His use of the phrase "which we would now call a mouse" further suggests the device was not at that time called a mouse.

The same article says the device was kept secret:

The tracker was described in various internal Admiralty documents, but was kept secret, and not disclosed, explicitly when the technology was patented, in 1946

The fact the original inventor and his team did not call it a mouse, and very few people would have known about it because it was secret, make it extremely unlikely that the device would have been referred to colloquially as a mouse.

Does the term "mouse" actually come from nautical slang?

It's unlikely. The inventors themselves say they don't know why they called it a mouse. It was introduced to the public at a demonstration in Stanford Research Institute on December 9, 1968. In that demo, Douglas Engelbart (along with Bill English, widely credited as being the inventor of the mouse) says:

I don't know why we call it a mouse. It started that way and we never changed it.

You can hear this directly from the horse's mouth, here:

However, other sources such as this Wikipedia page, support the common theory that Engelbart and English

Perhaps this was the reason, or perhaps someone on the team had nautical knowledge and spotted a resemblance to a stay mouse. Occam's razor would suggest the former.