What is the origin of the term "screw" in the case of a prison guard?

The term screw can refer to a prison guard. An example of this is seen in the folk song The Catalpa:

Which is correct and are there sources to back it up?

In complement to Kosmonaut's answer, I'd like to add a few pieces to the jigsaw puzzle.

The undisputed etymology of the English noun screw is from Middle French "escroe" (pronounced "escrow") which evolved into present-day French "écrou" (pronounced a-crew) and designates the nut (of a bolt). Its use in English is recorded as early as ca 1400.

Interestingly enough there are in present-day French a number of expressions related to the jail system bearing the word "écrou".

From there one is faced with two different and possibly complementary explanations because the Old French word escroe has two different meanings, each with its own etymology.

So how does the screw relate to a key?

First one has to take into account the fact that many prisoners were not only locked in cells (either individual or collective) but also shackled and chained to the wall (in older times when locks were expensive to produce, they were just chained) and that involved shackle riveting and later screwing (for screw pin shackles). There are a number of collectors shackles that can illustrate this "technology" - here is a randomly selected sample (of which I include the pictures below in case it goes away). One can guess how it works: the screw must first be removed so that the key can open the shackles. 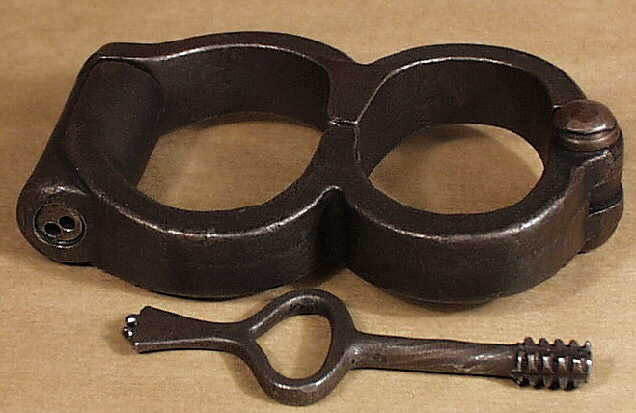 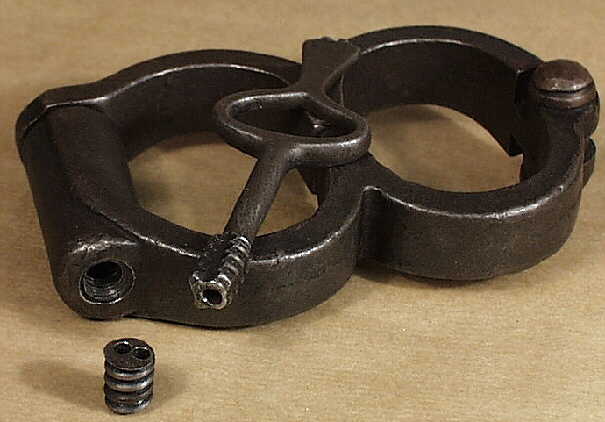 Note 1: In Icelandic the word for screw is skrúfa (very close to the Latin scrofa) and incidentally also means "to mount a female". In Spanish, the screw nut is tuerca whilst the swine is puerca. Note 2: See also the etymology of porcelain for another word involving the swine genitals.
Share
Improve this answer
answered Jul 3 '11 at 7:24

The OED first cites screw in the 19th century.

Meaning "prison guard, warden" is 1812 in underworld slang, originally in reference to the key they carried.

Looking up the key connection I found this source:

screw as a term for a prison guard is based on the fact that screw was originally slang for "key." One of the most important functions of a prison guard, or turnkey, as he's often called, is to see that prisoners are locked up at the appropriate times -- and that involves turning the "screw." Interestingly enough, Henry Mencken reports in The American Language that in the 1920s deskmen and bellboys in hotels used screw as a slang term for room key. Another theory is that screw refers to the thumbscrews used by jailers in ancient times to torture prisoners into confessing.

Assuming the content of this webpage isn't totally fabricated, this info came from the Encyclopedia of Word and Phrase Origins.

So, the origin is not for certain; it seems likely that it had something to do with the key they carried, but might possibly had some connection to thumbscrews.

This came from the prison's punishment pointless device the crank. This was a large handle in a prisoner's cell that they would have to turn, thousands of times a day. This could be tightened by the warders, making it harder to turn, which resulted in their nickname of screws. These punishments were not abolished until 1898.

A prison guard is sometimes referred to as a "turnkey." Therefore "screw" is a slang version of this word.

One punishment was to make prisoners do hard labour, such as putting them on a treadmill ten hours a day. Another form of hard labour was to turn a crank which served no purpose but to exhaust the prisoner. The guards would tighten the crank to make turning it harder, giving them the nickname screws.

184
What is the origin of ZOMG?
7
Origin of "Screw the pooch"
12
Did the slang term "The Bomb" meaning "Very Cool" come from the American Jazz scene?
0
What is the origin of "choke in the clutch"?
7
Why is German anti-aircraft fire called "Archibald"?
6
Does this OED citation of "third-rate," and the origin of the idiomatic term, relate to the British Royal Navy?
11
What's the etymology of the military slang word "jippo" meaning gravy?
12
Where does the term "shiv" (a makeshift dagger) actually come from?
8
What is the origin of "stir" meaning "prison"?
8
English plural of "conundrum"