Why is /ɪŋk/ used with "ink" words when the actual pronunciation is /ijŋk/?

"The word “English” is the one that causes the most confusion for me in IPA. I regularly see it written in IPA as /ˈɪŋɡlɪʃ/, and although that is much like RP, back in the San Joaquin Valley it’s definitely and clearly /ˈiŋɡlɪʃ/. At the very least, the first “E” and the middle “i” aren’t possibly the same vowel. I also would not call the second vowel /ɨ/, but it’s possible that I have trouble identifying /ɨ/ in my speech anyway (but the Rosa’s/roses difference helps)."

5) YouTube /pijŋk/ not /pɪŋk/ song
Here is a typical American accent where the word "pink " is being used clearly using the /pijŋk/ . https://www.youtube.com/watch?v=Asb8N0nz9OI 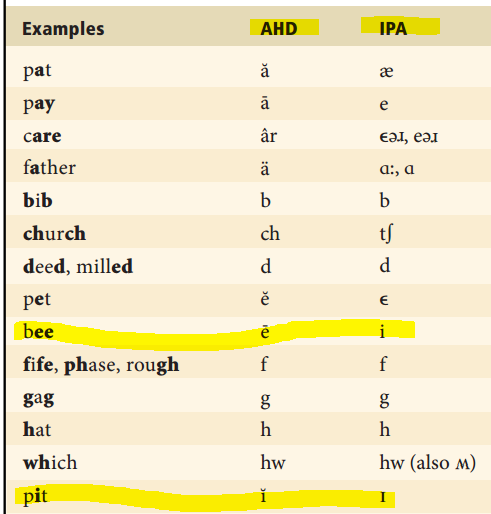 Why is "bee" \bi\ and not \bi:\ ? Because Americans don't see the difference as a lengthening of time but as a change in tone.

When most people speak, I hear the same vowel in pink and pit. There are definitely some people from California who say peenk and keeng. And from the links you give, some people from Michigan do the same thing. For these speakers, the phoneme /ɪ/ changes to /iː/ before /ŋ/. This really isn't a problem for comprehension, because /iːŋ/ isn't present in any English words, so there are no minimal pairs.

In California, many people suspect this is due to the influence of Mexican accents.

At a wild guess, in Michigan it's related to the Northern Cities Vowel Shift.

Hmmm...when is the last time any of you said the word "ink" in a sentence (before reading this question)? The last few instances I can remember myself are:

"Do you sell printer ink?"

Do you pronounce "ink" the same way in each variation of sets? I don't. My twenty-one year-old son doesn't either. We're both "native" speakers, although my mother's English was a heavily "accented" dialect, and I spoke only "twinspeak" for the first few years of my life, so my speech "native"ness and his differ.

But to the point of the OP question, I agree. I think for the sake of standardization, which is the purpose of dictionaries and the like, certain forms become calcified and canonized, and as actual variations continue to shift, the standard form retains tradition and loses correctness.

Check out this speech archive for a cool example of variation collection:

(I heard about the project on NPR - I'll try to find the link.)

I realized that Wikipedia, as well as my current school, are using British-based publishing companies as their source.

All I needed to do was find a dictionary by an American publisher.

Here is the definitive explanation by Merriam-Webster.

...When it precedes \ŋ\, \i\ is often followed by a \y\ sound. The resulting sound often greatly resembles \ē\ .

Unfortunately, Wikipedia obviously prefers the British reading and the natural American reading is often left secondary or not at all.

I will buy a Merriam-Webster dictionary and use it for my future battles at school. Thank you all for participating in this debate.

I actually saw a detailed explanation, in Japanese in a Japanese dictionary, of American \i\; which explained that the IPA symbols such as \iː\ do not currently support the American reading (they don't have a symbol to differentiate them). Brits actually throw both of the American \i\ tones into the same category and only differentiate the length in time of the sound, whereas Americans categorize \i\ in two tones which we call "long" and "short" (terms that are confusing when British speakers use them to mean something completely different).

American Engish is not being fairly represented by IPA.

Not the answer you're looking for? Browse other questions tagged pronunciation ipa or ask your own question.

1
International Phonetic Alphabet: why are the symbols used for the letter "i" in "champion" and "billion" different?
1
How to correct/improve 's-' pronunciation at the beginning of a sentence?
1
Why do some words change inflection when used differently?
4
Pronunciation of words starting with "a"
2
Where can i find the IPA sounds with example words and their pronunciation?
3
Why is [ɚ] used instead of [əɹ] in IPA phonetic transcriptions of English words?
0
Primary and secondary stress in IPA transcriptions on Cambridge Dictionary when two words are involved